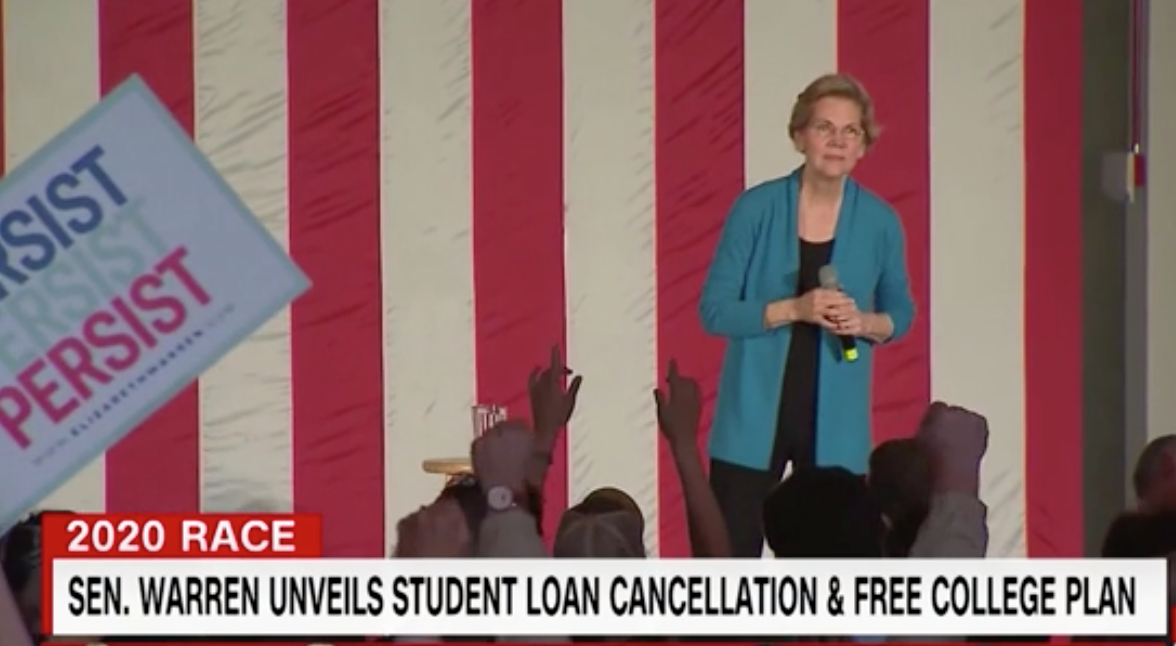 A $1.25 trillion giveaway program to college grads and future college students deserves scrutiny, not praise as a “bold,” “sweeping” or “ambitious” plan that could “distinguish” Sen. Elizabeth Warren from her Democratic competitors.

Some news stories, including CBS and NBC online, bordered on being a sales pitch for the plan to forgive student loans and make public colleges tuition-free. CBS boosted Warren’s claims that forgiving student loan debts for millions of Americans “could supercharge the economy,” (even though liberal economists have contradicted that claim in the past). It even asked “What’s not to like?” and only cited one Twitter’s complaint it would be unfair to people who didn’t go to college. That story also included a more than $49 billion error about one facet of her plan.

NBC online ignored criticism of the plan, merely repeating the Warren campaign’s statements about the plan and its support from the president of the American Federal of Teachers.

Warren proposed the “cancellation of up to $50,000 in student loan debt for 42 million Americans,” “universal free college,” $100 billion to expand Pell Grants, and a “minimum” of $50 billion fund for Historically Black Colleges and Universities and Minority-Serving Institutions.

But it won’t make college more affordable or more equitable, according to some conservative experts.

The Daily Signal reported on April 23, that Warren’s proposal would not create “equality in access to education” and “would likely expedite the rise in college tuition.”

“Proposals to make college “free” or to forgive vast amounts of student loan debt reward one entity more than any other: the universities,” The Daily Signal wrote. It found research showing federal subsidies (in the form of student loans) pushed tuition higher.

The Signal also criticized the “exorbitant cost to taxpayers” of Warren’s $1.25 trillion proposal (over a decade) and the way it “would penalize students” who sought less expensive educations or worked to prevent or minimize the student loan burden.

Conservative criticism was missing from much of the liberal coverage of Warren’s plan, but appeared elsewhere.

Economist Ben Stein (who also famously played one in movies like Ferris Bueller’s Day Off), told Fox Business Network anchor Trish Regan the plan was “irresponsible,” “childish” and a “fantasy.”

Stein also criticized the plan on principle since nothing is actually free. Someone, somewhere is paying for it, and teaching young people that it will be “free” is irresponsible.

“For a U.S. senator which is a very high ranking position in this country to go out and tell young people, ‘Hey look kids, just hang on a little awhile and it’s all gonna be free,’ That is wildly irresponsible. And wildly childish,” Stein said.

So who will pay for tuition free college and debt forgiveness, if somehow Warren’s proposal was adopted? Taxpayers, of course. But that’s not how she describes it.

In her April 22, Medium post proposing free college and loan forgiveness Warren claimed it would be more than paid for by her “ultra-millionaire’s tax” on the total assets of people with more than $50 million in assets. Her campaign has claimed the wealth tax would raise $2.75 trillion over a decade.

However, this claim was disputed by liberal Harvard economist Lawrence H. Summers. CNN Politics reported that Summers expected the wealth tax to bring in between “one-eighth” and “40 percent” of estimates coming from the Warren team — or between $343 billion and $1.1 trillion. Below the estimated cost of her free college and loan forgiveness plans.

Taxing wealth this way is also viewed by many critics as unconstitutional and even CNN Politics admitted it would “likely” face Supreme Court challenge. Not to mention massively bureaucratic, as government would assess the value of all real property.

Of course, when Warren first proposed the tax many liberal media loved the idea of this punitive tax on the very wealthy. Washington Post opinion writer Paul Waldman viewed it as “good politics” that “couldn’t come at a better time.” Others defended its constitutionality, while Salon promoted it as “popular,” “far from radical” and a “bold policy prescriptive.” The Week argued it was morally right.