By yesterday afternoon, the Obama administration recognized that it had a serious problem on its hands. Zeke Miller at Time.com reported that 2008 presidential campaign manager and longtime adviser David Axelord's book revealed that, in Miller's words, "Barack Obama misled Americans for his own political benefit when he claimed in the 2008 election to oppose same sex marriage for religious reasons." Oba never opposed same-sex marriage, but acted on advice from Axelrod and others to act as if he did during the campaign.

Axelrod's claim generated enough coverage that Team Obama knew that even the Associated Press, aka the Administration's Press, was going to have to do some kind of story on his adviser's revelation. So how to do damage control without creating the kind of stir which would force the network broadcasters to inform low-information voters of the core deception? That's easy. Throw all pretenses of presidential dignity out the window and go to (holy moly) Buzzfeed.

Obama hysterically claimed that Axelrod was "mixing up my personal feelings with my position on the issue." (bolds are mine):

Buzzfeed: David Axelrod wrote in his book that you hated and weren’t good at, he said, “bullshitting” about your position on marriage in ‘08. Why did you feel you had to do it? 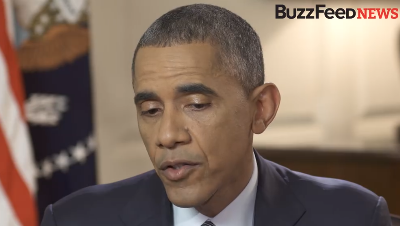 Obama: Well, you know, I think David is mixing up my personal feelings with my position on the issue. I always felt that same-sex couples should be able to enjoy the same rights, legally, as anybody else, and so it was frustrating to me not to, I think, be able to square that with what were a whole bunch of religious sensitivities out there. So my thinking at the time was that civil unions — which I always supported — was a sufficient way of squaring the circle. That, OK, we won’t call it “marriage,” we’ll call it “civil unions,” same-sex couples will have the same rights as anybody else, but the word “marriage” with its religious connotations historically would be preserved for marriages between men and women. Where my evolution took place was not in my attitude toward same-sex couples, it was in understanding the pain and the sense of stigma that was being placed on same-sex couples who are friends of mine, where they’d say, “You know what, if you’re not calling it marriage, it doesn’t feel like the same thing. Even if you gave me the same rights, the fact that I’m being treated differently or the love that we feel is somehow segmented off, that hurts.” It was because of those conversations that I ended up shifting positions, that civil unions, in fact, were not sufficient rather than marriage. But I think the notion that somehow I was always in favor of marriage per se isn’t quite accurate. What I was in favor of is making sure that…

Buzzfeed: Despite that old questionnaire?

Obama: Well, yeah. The old questionnaire, you know, is an example of struggling with what was a real issue at the time, which is how do you make sure that people’s rights are enjoyed and these religious sensitivities were taken into account? You know, these are the kinds of things you learn as you… move forward in public life: that sometimes you can’t split the difference. That sometimes you just have to be very clear that this is what’s right. And what I’m very proud of is to see how rapidly the country has shifted and maybe the small part that I’ve played, but certainly my Justice Department and others have played, in this administration in getting to where we need to be.

Too bad for Obama's ability to ever "square the circle" with the truth that the 1996 questionnaire shows no signs of any kind of "struggle." Ben Smith, who at the time was at the Politico and who "just so happened" to be the Buzzfeed reporter who interviewed Obama yesterday, reported in January 2009 that Obama's position was unequivocal (link is in original):

In a 1996 questionnaire filled out for a Chicago gay and lesbian newspaper, then called Outlines, Obama came out clearly in favor of same-sex marriage, which he has opposed on the public record throughout his short career in national politics.

“I favor legalizing same-sex marriages,and would fight efforts to prohibit such marriages,” Obama wrote in the typed, signed, statement.

There was no use of “civil unions,” and "no compromise whatsoever," the Windy City Times story today notes.

But yesterday, career liberal lapdog Smith didn't challenge the president's contention that he was "struggling" with the issue, even though Obama was doing no such thing.

As if we need any other evidence that Obama never meant what he said in 2008, personally or politically, we have this from Greg Sargent at the Washington Post's Plum Line blog in March 2012:

Obama’s top political advisers have held serious discussions with leading Democrats about the upsides and downsides of coming out for gay marriage before the fall election, a Democratic strategist who has discussed these matters directly with Obama's campaign inner circle tells me.

This does not mean that it will happen, and there are plenty of reasons to assume it won’t. Indeed, it would be political malpractice if Obama’s top advisers didn’t discuss every permutation and possibility, no matter how far fetched. However, the fact that it has been discussed seriously at high levels means it’s not out of the question.

Sargent didn't even bother to try to articulate Obama's real position, because by then everyone besides America's low-information voters knew that Obama unconditionally favored same-sex "marriage." The only open question was what his pose would be during the remainder of the 2012 presidential campaign.

Early Wednesday morning, the AP, in an unbylined report, obediently fell right into line, by employing a deceptive headline and turning the matter into a matter of interpretation instead of drop-dead obvious deception:

President Barack Obama is disputing a longtime aide's view that Obama feigned opposition to gay marriage, compromising his true beliefs out of concern it could hurt him with voters.

Former Obama strategist David Axelrod writes in a new book that Obama modified his public position to say he supported civil unions but not gay marriage. Axelrod says that was because his political advisers told him supporting gay marriages could hurt him politically.

But Obama told BuzzFeed News in an interview posted late Tuesday night that Axelrod is "mixing up my personal feelings with my position on the issue."

... Obama told BuzzFeed News that "I always felt that same-sex couples should be able to enjoy the same rights, legally, as anybody else and so it was frustrating to me not to, I think, be able to square that with what were a whole bunch of religious sensitivities out there." He added that he thought civil unions were "a sufficient way of squaring the circle," but that "the pain and the sense of stigma that was being placed on same-sex couples who are friends of mine" changed his mind.

"I think the notion that somehow I was always in favor of marriage per se isn't quite accurate," Obama said, apparently referring to gay marriage.

... He indicated his support for gay marriage in a 1996 questionnaire before backtracking years later. The president called that questionnaire "an example of struggling with what was a real issue at the time, which is, how do you make sure that people's rights are enjoyed and these religious sensitivities were taken into account?"

Note that the AP didn't quote Obama's unequivocal 1996 statement (“I favor legalizing same-sex marriages,and would fight efforts to prohibit such marriages”). That would have hurt Dear Leader's position.

So the current damage control appears to be complete. Low-info voters probably won't hear or see a word about any of this.

If it's any consolation, that won't change the truth, which is that Obama struck a pose in 2008 to get elected, and by doing so largely delegitimized its result. As I noted yesterday, "Roughly 570,000 votes switching from Obama to (John) McCain in 8 key states won by Obama would have changed the Electoral College outcome" — and it's reasonable to believe sufficient numbers of voters might have changed their minds if they knew Obama's real position on same-sex "marriage."