At the Associated Press on Friday, economics writer Paul Wiseman attempted to rewrite history, pretending that "trickle down" economics is a term Republicans have used for their economic plans since the days of Ronald Reagan, and that the current GOP tax plan which has made it through the House and is being considered by the Senate is more of the same thing.

In fact, Reagan's policies, which were supply-side, growth-oriented and behavior-changing, did not cause only tiny amounts of money to "trickle down" to everyday Americans; they instead led to explosive and sustained employment and across-the-board income growth which hasn't been seen since.

Wiseman began with deception, and kept it going during his entire writeup:

Derided by critics, trickle-down economics gets another try

In their drive to cut taxes, President Donald Trump and congressional Republicans are betting it does.

Behind their legislation is a theory long popular among conservatives: Slash taxes for corporations and rich people, who will then hire, invest and profit — and cause money to trickle into the pockets of ordinary Americans. The White House says the plan's corporate tax cut alone would eventually raise average household incomes by $4,000 a year.

The tax plan's "trickle-down" approach was popularized in the 1980s during the Reagan administration, though it dates back at least to a 1932 wisecrack by Will Rogers. And history shows it has a spotty record of delivering on its promises.

Wiseman's LinkedIn profile indicates that he's old enough to know that he's using the term Reagan's opponents used to describe his economic plan, but is pretending that the GOP has used that same term for the past 3-1/2 decades. What rubbish.

In fact, as a journalism major at Indiana University who graduated in 1983, he must surely be aware that David Stockman, Reagan's first Director Office of Management and Budget, erroneously characterized Reagan's tax plan as "trickle down" in a controversial Atlantic Magazine interview in December 1981. When it appeared, it was all anyone talked about for at least a week, even though Stockman's ignorant remarks came 6 and 18 months, respectively, before the second and third phases of the Economic Recovery Tax Act's individual tax cuts even took effect. Stockman completely misunderstood the objective of Reagan's supply-side tax cuts and grossly mischaracterized them. (At that point, how could even have known their ultimate effect?) 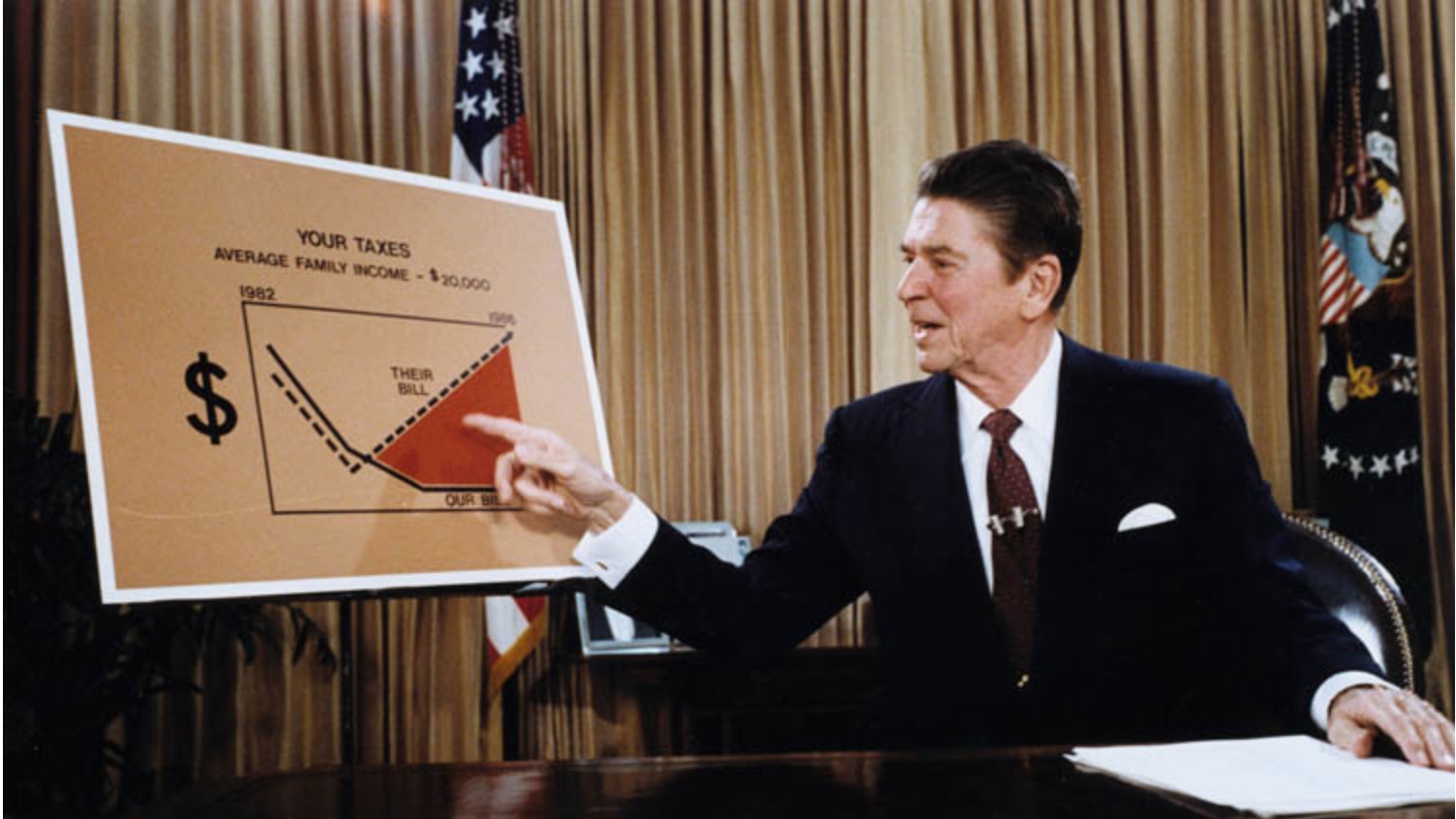 Reagan's tax cuts were designed to grow the economy and make everyone significantly better off. They succeeded marvelously. Once the cuts were fully in place, the economy left the July 1981-November 1982 recession in the dust:

Despite these results, Wiseman predictably went to a far-left expert to pretend that supply-side economics doesn't really work:

In the view of Carl Davis, research director at the left-leaning Institute on Taxation and Economic Policy (ITEP), the track record for supply-side economics "is not particularly inspiring."

This is how loopy-left ITEP is, as seen at its "About" page:

ITEP, along with its c(4)partner, Citizens for Tax Justice, became a nationally known voice for tax fairness after analyzing the effects of the 1981 tax cuts under President Reagan and demonstrating that ordinary families, in fact, experienced a net tax increase.

ITEP must think that the median and percentile group income gains retrieved from the Census Bureau and cited above are all made up. The fact is that the Reagan tax cuts completely "removed 4 million working poor from the tax rolls; they no longer paid any federal income tax," and lowered the federal income tax burden on lower middle-class families to a microscopic level.

Wiseman's insistence on describing Reaganomics as trickle-down, and then pretending that Republicans routinely employ the term, is especially risible. As John Hinderaker at Powerline noted on Friday, "no significant Republican" uses the term.

What will happen if pro-growth policies are actually enacted and signed into law? The sky is the limit. That is why White House press correspondents and Democratic Party news outlets like the Associated Press are desperately trying to block Republican tax proposals from being enacted into law.

Based on the positive effect they have had on the economy's performance during the past two quarters. Trump's efforts to rein in regulation are already starting to look like the equivalent of a modest tax cut.

If Congress passes genuine tax reform as currently designed, the sum of that and Trump's deregulatory efforts could lead to the strongest economy we've seen in almost two decades. That the Democrats are trying desperately to stop tax reform tells us all we need to know about their priorities: Party first, country second.