It doesn't seem likely that an oil company CEO would get the benefit of the doubt Apple CEO Tim Cook received from the press yesterday after he emailed well-known financial commentator and investment adviser Jim Cramer about his company's performance in China.

In an email read over the air on CNBC, Cook reported that "we have continued to experience strong growth for our business in China through July and August." The question is whether, by providing this private disclosure, Cook violated U.S. "fair disclosure" regulations requiring that "materal information" be disclosed to the public.

Here's how Associated Press technology writer Brandon Bailey framed the matter in a Monday afternoon report (bolds are mine throughout this post):

... Under federal securities rules, public companies aren't supposed to disclose "material information" about their business performance unless it's made widely available to the public, noted Stephen Diamond, an associate professor who teaches securities law at Santa Clara University. But Diamond said Cook's email may not be an issue since Cramer read it on CNBC soon after he said he received it.

This is really lame reporting. The obvious problem is that "soon" doesn't cut it. Companies must take care that material information is made available to everyone at the same time; otherwise, those who have it before eveyone else can unfairly profit from it before everyone else learns of it. 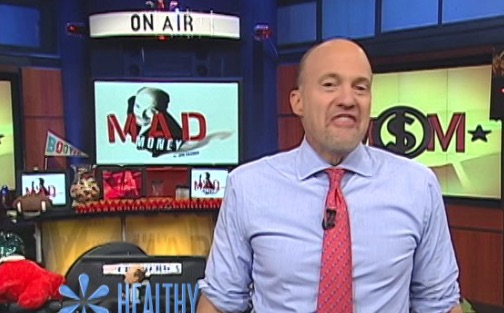 ... the private disclosure, which was tweeted by CNBC reporter Carl Quintanilla and read on air at CNBC, may have violated the Securities and Exchange Commission’s fair-disclosure regulation, white-collar lawyers told MarketWatch. The rule, deemed murky and often contested by companies, addresses how publicly traded companies disclose material nonpublic information to certain individuals or entities.

“The SEC will undoubtedly want to take a look at this,” said Thomas Gorman, a partner at the law firm Dorsey & Whitney who defends companies and individuals facing SEC and other regulatory investigations. At the very least, the SEC will contact Apple to seek context for the disclosure, he said.

... While the media typically get a pass under the disclosure rules, Cramer also co-manages a portfolio, Action Alerts PLUS, that has a long position in Apple, according to a recent disclosure on the website TheStreet.

CNBC did not respond to questions about the exact timing of when Cramer received the email and when it was first read aloud on air.

... “I certainly could see, in some circumstances, where the SEC would want to review the conduct and think it is a violation of Reg FD,” (lawyer Bill) Singer said. “It constitutes a disclosure giving certain individuals the benefit before it was percolated by the rest of the public, during a fast-moving, extraordinary market.”

The SEC declined to comment on the Cook email ...

At the New York Times, reporter Brian X. Chen seemed more interested in treating the matter as more of a human interest story than as a controversial business news item. Chen waited 13 paragraphs to bring up regulatory and disclosure concerns. Nevertheless, he added some important detail, and also quoted Singer:

He sent the question to Mr. Cook by email Sunday evening. His letter read: “Dear Tim, Just trying to do my best to cover Apple, as always, and I keep running up against ‘China fears’ and ‘China worries.’ We are in a tough moment in the market, and any clarity I might be able to get before Squawk on the Street at 9 Eastern would really help.” (This seems like an overt request for inside information. — Ed.)

Mr. Cook, who is known for being an early riser, sent his reply around 8 a.m. on Monday — 5 a.m. in California, where he lives.

“I get updates on our performance in China every day, including this morning, and I can tell you that we have continued to experience strong growth for our business in China through July and August,” Mr. Cook said in the email to Mr. Cramer. “Obviously I can’t predict the future, but our performance so far this quarter is reassuring.”

... The email gave Apple a short-term reprieve, helping lift its stock from 10 percent down to positive territory. Apple ended the day down 2.5 percent.

... the S.E.C. has signaled that reaffirmation of financial guidance, in some contexts, could even lead to a full-disclosure violation, according to Thomas A. Sporkin, a partner for Buckley Sandler and a former S.E.C. enforcement official.

... Bill Singer, a regulatory lawyer, said he expected the S.E.C. to investigate the context of the email and provide guidelines as to whether companies can disclose financial information this way to selected news reporters.

“I can see here that Cook is literally dancing on the edge of a razor,” he said. “At the end of the day it’s one of the largest companies in the world telling one reporter via a private email that our ongoing quarter is actually going to surprise people, and I consider that material.”

I should add that even if Cramer disclosed Cook's email instantly to CNBC and took no other action as CNBC announced its contents instantly on the air, that likely would not constitute a "public" disclosure, as CNBC is just one media outlet out of many. Additionally, CNBC's Carl Quintinilla didn't post the email's contents on Twitter, a more public venue, until 9:03 a.m., an hour after Cramer received it from Cook. That's a lot of time for people aware of the email to trade on information the rest of the pubic didn't have.

As I noted in my opening sentence, Apple, a darling of the press for decades going back to its David vs. Goliath days against IBM and then Microsoft, is getting off quite lightly in the initial media reporting of Cook's email. A disfavored company in a disfavored industry would not be so lucky. Instead, we'd likely be hearing calls for congressional investigations by now.

The contrarian blog Zero Hedge had a predictably cynical but nevertheless arguably accurate take (bold is theirs):

... While we are delighted by Tim Cook's subjective take of AAPL's Chinese prospects, we have a different question: where is the public filing that accompanies this letter which constitutes nothing short of a private business update with an outside, and unregulated by Apple, market cheerleader?

Because as the AAPL reaction to Tim's letter, which was clearly in Cramer's private possession for at least 1 millisecond before it was made public (and thus we don't know who else may have had access to it before its public dissemination), just how is this not a Regulation Fair Disclosure violation?

... for those who may have missed it, this is what AAPL's stock has done today, ever since this clearly market moving letter, helped AAPL regain an unprecedented $80 billion in market cap since the lows.

... with AAPL leading the S&P rapidly into the green, we are confident this, too, will be promptly forgotten and swept under the carpet of "whatever it takes to keep the market green."