According to a new draft report from CBS on the culture at 60 Minutes and the network, it wasn’t just former co-host Charlie Rose and ex-CEO Les Moonves who allegedly harassed and abused women. CBSN’s Vladimir Duthiers on Friday’s CBS This Morning explained the leaked findings “Eight current females tell us they have experienced a toxic workplace or frat house environment including harassment and being made to feel uncomfortable.”

But don’t despair because CBS has some good news about CBS. New York Times reporter Rachel Abrams reviewed the leaked report and found that aside from the alleged harassment, the network has its spin ready: “They also gave credit where credit was due and credited [fired-60 Minutes producer Jeff] Fager in some instances with promoting women.” (Fager also faces allegations of sexual misconduct.) In her article, Friday, Abrams noted how network executives are trying to reframe the besieged CBS as a champion of women:

Investigators added that “in more recent years, the broadcast has promoted more women to producer and to other senior roles, and Mr. Fager demonstrated sensitivity and support for working women.”

In one instance, a former worker claimed Hewitt sexually assaulted her on repeated occasions and destroyed her career. CBS reportedly settled with the woman for a total of $5 million plus $75,000 a year for life. 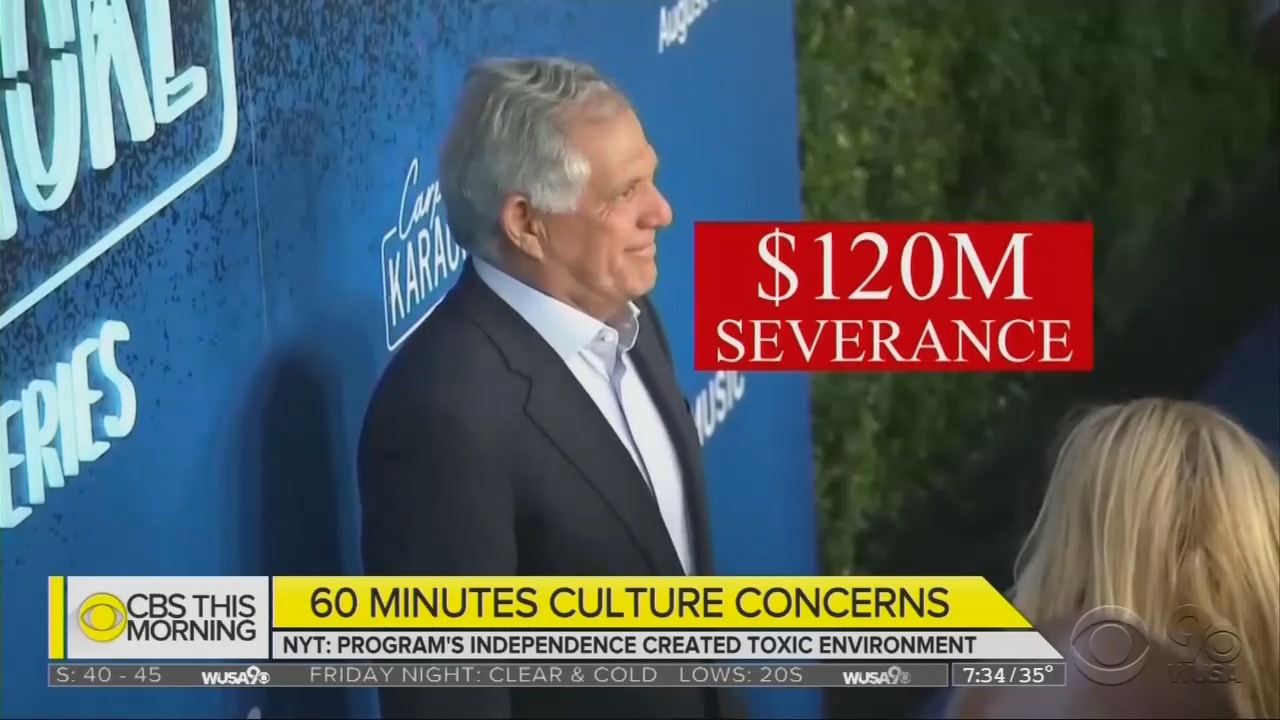 Abrams appeared on CBS This Morning and opined: “Normally with a figure that big, you assume that the company has a reason to believe that something very serious went on.”

After the report, co-host Gayle King deemed the report “frustrating” to have to deal with: “You know what else is frustrating? That this period of reckoning, I think, still continues for us.” She added, “Let the chips fall where they may.... I'm very proud to be part of the team. But this is very frustrating and, I have to say, embarrassing.”

King co-hosted with disgraced ex-CBS This Morning co-host Rose during the years he allegedly harassed and abused at least 27 women. On May 3, 2018, after the scandal was exposed, King whined on-air about having to cover it: “I don't know what to say about this.... I don't know what more we can do to Charlie Rose except a public flogging. He's gone.... I’m sick of handling it.” 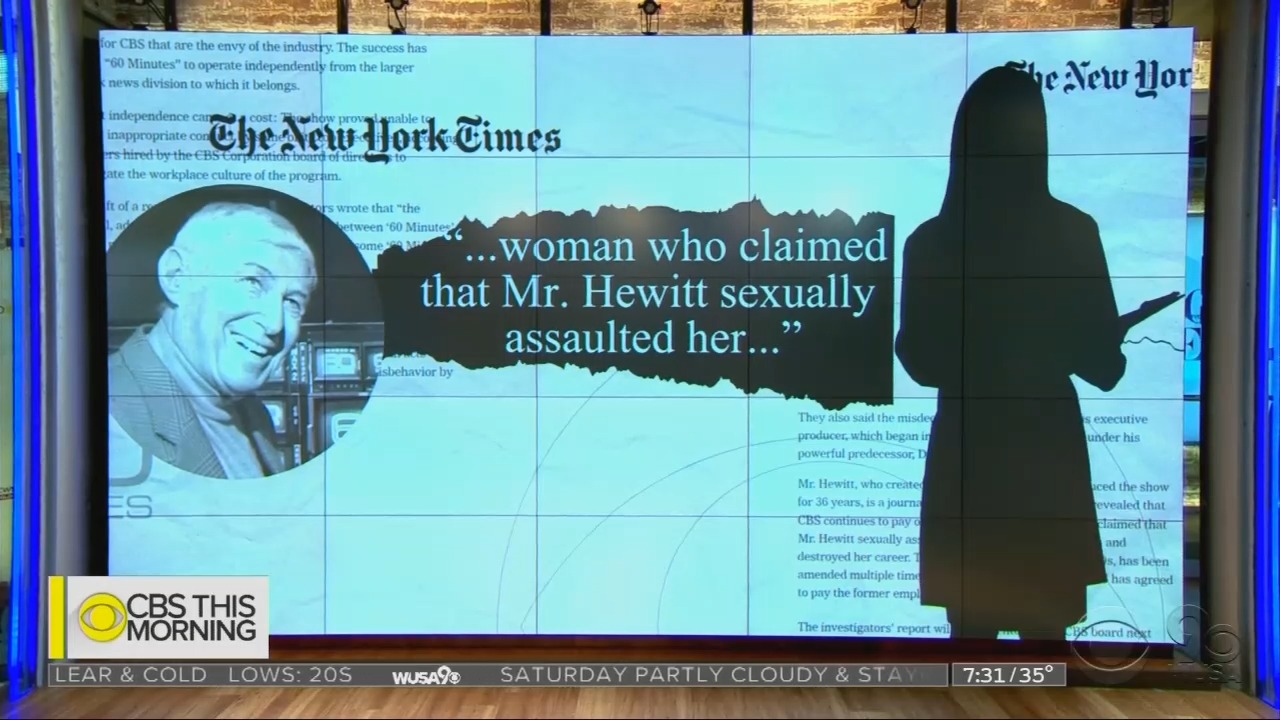 After some blowback, she retreated on May 4, 2018, saying of the Rose inquiry: “Let the chips fall where they may.”

In a profile with the New York Times in October, King admitted she’s still friendly with Rose and sees him on occasion:

“She hasn’t been shy about the fact that she remains close with Mr. Rose. “I know there are two sides to every story, that’s what I know,” she said. The day we met at Norma’s, Ms. King had just called Mr. Rose to check in after he’d had a health scare. Mr. Rose is her friend and friendship is important to Ms. King, who for most of her life was known only as the professional best friend to America’s best TV friend.

On September 10, 2018, CBS This Morning co-host Norah O’Donnell complained that “this is hard for everybody at CBS News.” Speaking of Moonves, she lamented, “The most powerful media executive in America has resigned in the wake of this Me Too movement and he's my boss  — or he was my boss.”

BIANNA GOLODRYGA: A new report about an investigation into workplace culture at CBS News is raising concern among employees. According to The New York Times, outside investigators hired by the CBS board uncovered reports of misconduct by some 60 Minutes employees. That includes a never before reported claim of sexual assault against Don Hewitt, the creator of 60 Minutes. But the Times reports investigators did not find a toxic work or frat house environment for women at the wider news division. A finding disputed by multiple employees. Vladimir Duthiers of our streaming network CBSN shows us the concern. Vlad, good morning.

VLADIMIR DUTHIERS: Good morning. Eight current females tell us they have experienced a toxic workplace or frat house environment including harassment and being made to feel uncomfortable. A draft report prepared for the CBS board uncovered allegations of wrongdoing at the top levels the most successful news program in U.S. History. In its 51-year history, 60 Minutes has been run by just two executive producers, Don Hewitt and Jeff Fager. Both now reportedly face misconduct allegations reviewed by The New York Times Rachel Abrams from a leaked draft of a CBS investigation.

RACHEL ABRAMS (New York Times areporter): It seems like the investigators were very, very thorough. We know they interviewed hundreds of people and their report included mixed results.

DUTHIERS: According to the Times, the report found the success of 60 Minutes allowed it to operate separately from the rest of the news division, which led to misconduct by some 60 Minutes employees. In one instance, a former worker claimed Hewitt sexually assaulted her on repeated occasions and destroyed her career. CBS reportedly settled with the woman for a total of $5 million plus $75,000 a year for life.

ABRAMS: Normally with a figure that big, you assume that the company has a reason to believe that something very serious went on.

DUTHIERS: Hewitt retired in 2004 and died five years later. Fager has also faced allegations of sexual misconduct, including claims he groped one employee. Investigators reportedly determined CBS News was just fied in firing him earlier this year for sending a threatening text message to CBS correspondent Jericka Duncan and then allegedly lying about it.

ABRAMS: They also gave credit where credit was due and credited Mr. Fager in some instances with promoting women.

DUTHIERS: Fager told The Times of the text quote my intent was to demand fairness. And in response to the report he said, “This is the first I'm hearing some of these allegations. I was not given the opportunity by CBS investigators to respond.” He later told us, “This report shows 60 Minutes is a good place for women and the reports that it isn't were exaggerated.” This comes just days after the Times reported on other allegations in the report against former CBS chairman and CEO Leslie Moonves, who allegedly destroyed evidence and deliberately lied about his sexual misconduct. The CBS board will have to decide if he's still entitled to a $120 million severance after reading the final report.

ABRAMS: There's a lot of stuff in there. There were a lot of people mentioned in there. I don't think this is going to be the last story about the investigation.

DUTHIERS: We reached out to the investigators as well as to spokespeople for CBS and CBS News. All declined to comment. In an e-mail, CBS President and active CEO Joe Ianniello told employees it was “frustrating the report leaked to The Times before management and the board knew about it.” He says, “While we still don't yet know the actual results, he understands the investigation is nearing an end.”

KING: You know what else is frustrating? That this period of reckoning, I think, still continues for us.  And the fact that this new reporting that eight current employees say that they have experienced a toxic atmosphere means there's still more work to be done here. And I for one and glad that investigation is going on. I also hope that when it’s all done that  we will know exactly what happened here.

I don't think we can move on until it comes out. Let the chips fall where they may and we can continue. There are a lot of talented people who are working here are doing a really good job and I'm very proud to be part of the team. But this is very frustrating and, I have to say, embarrassing.

NORAH O’DONNELL: One of the things we talked about more than a year ago when this started was that not only does this ruin people's lives —

O’DONNELL: But it also drives women from the field of journalism or working at CBS News, which is a great company and full of great people. But we want to make sure that people not only feel safe here, but they are promoted in the right way, that their contributions are acknowledged in the right sort of way so that we have the best workforce out of any news organization.

BIANNA GOLODRYGA; And transparency is key throughout all of this investigation.

KING: That’s what 60 Minutes does. Transparency.