Almost ten months after bombshell accusations that ex-CBS This Morning co-host Charlie Rose allegedly sexually harassed and abused women, co-host Norah O’Donnell lamented how “hard” it was to now have “my boss,” departing CEO Les Moonves, also be accused of sexual assault. After a full report opened the show, O’Donnell began her personal remarks with self pity: “This is hard for everybody as CBS News.”

O’Donnell, who worked daily with alleged harasser Rose, complained, “...The most powerful media executive in America has resigned in the wake of this Me Too movement and he's my boss  — or he was my boss.” She added, “Les has always treated me fairly and with respect.”

The accusations came to light after damning articles by the New Yorker’s Ronan Farrow and Vanity Fair magazine. Moonves is accused of (among other things) unwanted kissing, exposing himself, and attacking a doctor during an appointment.

Still, for me it's been another sleepless night thinking about this, the pain that women feel, the courage that it takes for women to come forward and talk about this, and I really didn't know what I was going to say this morning. I know I needed to say something.

So Gayle and I have talked and texted and I said, you know, “Gayle, I'm kind of looking back to November” when we dealt with accusations against our former co-host. And Gayle sort of said, “Yeah, but I didn't think we'd still be the story in September.” 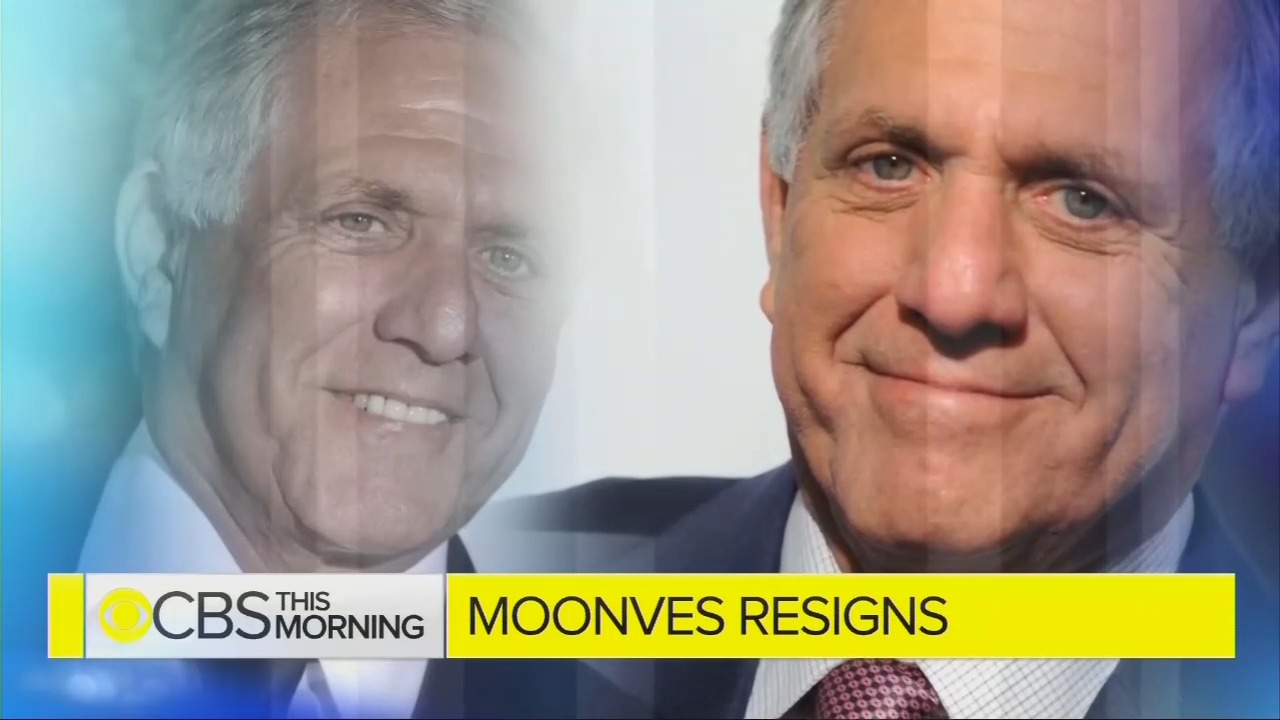 It’s interesting that O’Donnell mentioned King. She co-hosted with Rose during the years he allegedly harassed and abused at least 27 women. On May 3, 2018, after the scandal was exposed, King whined on-air about having to cover it: “I don't know what to say about this.... I don't know what more we can do to Charlie Rose except a public flogging. He's gone.... I’m sick of handling it.”

After some blowback, she retreated on May 4, 2018, saying of the Rose inquiry: “Let the chips fall where they may.”

On July 30, CBS promoted a conspiracy theory as for the reason behind the sexual harassment allegations against CEO Moonves. On August 7, the network delayed the findings of the Rose investigation.

Ironically, CBS This Morning co-host John Dickerson on August 17th touted the need for people to “do the right thing” when no one is watching. Apparently that didn’t happen as CBS employed, for years, a host and a CEO who allegedly harassed women.

Reporter Jericka Duncan swore that “we'll continue to report on [Moonves] just like we would anything else.” Credit to CBS for at least leading with the story on Monday. Hopefully, the journalists at the network will continue to cover their ex-colleagues accused of harassing and assaulting women.

NORAH O’DONNELL: CBS’s Chairman and CEO Les Moonves resigns after new accusations of sexual misconduct are reported. We look at the claims that brought done one of TV's most powerful figures. 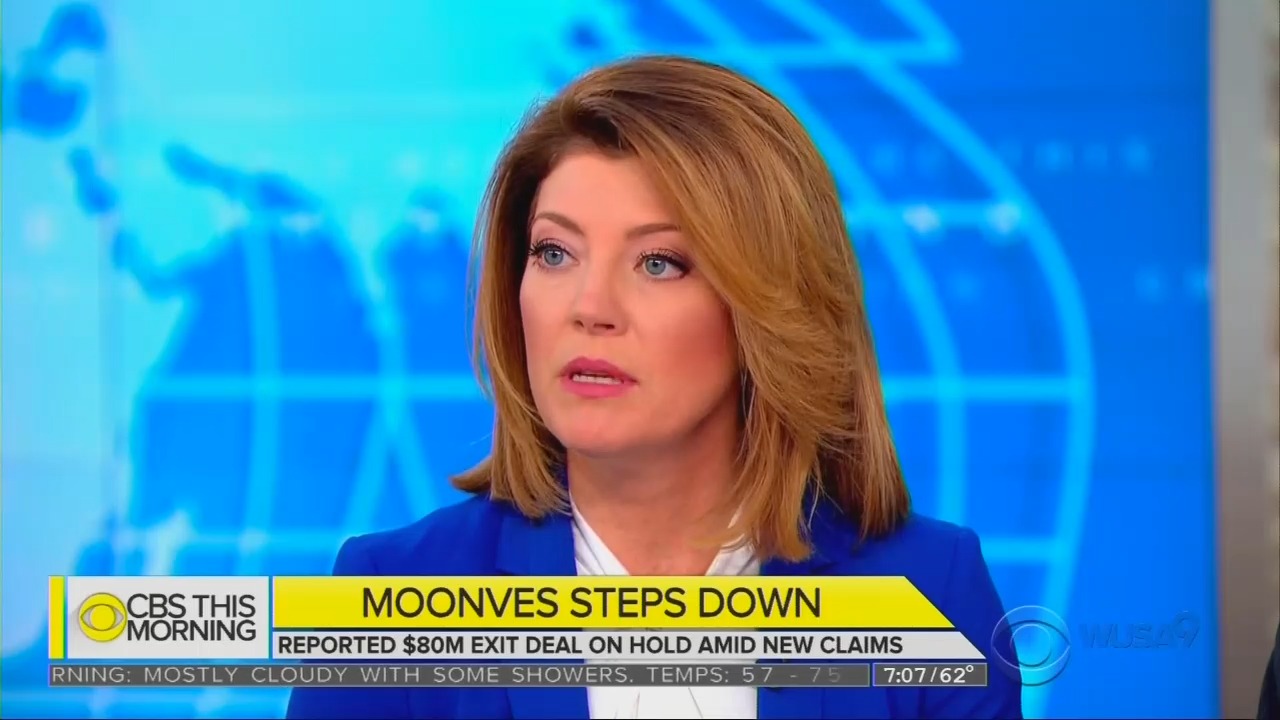 O’DONNELL: But we want to begin with this important news about this network and one of the most powerful executives in the entertainment industry. Longtime CBS chairman and CEO Leslie Moonves was forced to resign last night. The announcement came hours after reports of at least seven new sexual misconduct and assault allegations again Moonves. Thirteen women now accuse him of sexual harassment and abuse.

JOHN DICKERSON: A source knowledgeable about the negotiations of the departure tells CBS News Moonves was offered a separation package of $80 million in stock. Jericka Duncan is here with the sudden end to weeks of discussion about Moonves’ future. Jericka, good morning.

JERICKA DUNCAN: The CBS board says $20 million, originally part of Moonves severance package, will be donated to one or more organization that support the Me Too movement. Any severance payments to be made to Moonves will depend upon the results of an independent investigation and a board evaluation. In a statement late last night, Moonves said the allegations against him are untrue and not consistent with who he is.

Exit negotiations between the CBS board of direct towards and Leslie Mooves intensified Sunday after the New Yorker published six more allegations of sexual misconduct against the embattled entertainment executive. Reporter Ronan Farrow say the incidents took place between the 1980s and early 2000s while Moonves worked at CBS and other media companies. In the 1980s, when Moonves was an executive at Lorimar Telepictures, retired television executive Phyllis Golden-Gottlieb alleges he physically forced her to perform oral sex on him and years later violently threw her against a wall. After rejecting Moonves’ advances, “He absolutely ruined my career,” she told The New Yorker.

CYNTHIA LITTLETON (Variety TV managing editor): There's a disturbing pattern of aggressive and some would say predatory behavior toward people that were clearly subservient to him.

DUNCAN: Writer Linda Silverthorn told The New Yorker she had consensual sexual encounters with Moonves while he was a vice president at 20th Century Fox in 1984. She says she eventually ended the relationship but six years later she says he made unwanted advances, including kissing and exposing himself to her. Silverthorn confirmed her story to CBS News and in a statement said Moonves should absolutely be fired with no severance. In a statement to the New Yorker, Moonves acknowledged three of the six encounters but said they were consensual. Vanity Fair published its own story online Sunday. The magazine said a physician claimed a VIP patient tried to force himself on her during an appointment 19 years ago. A source told Vanity Fair the patient was Moonves. In a statement to Vanity Fair, Moonves called the allegations untrue but says, “I tried to kiss the doctor, nothing more happened.” In a statement Sunday about The New Yorker allegations, CBS said it takes these allegations very seriously. “Our board of directors is conduct a thorough investigation of these matters.”

DUNCAN: Moonves had been in a corporate battle with Shari Restone a controlling shareholder in CBS through her company National Amusements, which also owns Viacom. As part of an agreement to dismiss that litigation, Redstone reaffirmed the company would not pursue a merger of CBS and Viacom for at least two years. CBS chief operating officer Joseph Ianniello is now serving as interim CEO. Vlad?

O’DONNELL: This is really hard.

O’DONNELL: This is hard for everybody as CBS News. I haven't talked about this before because when you think about it I think about the most powerful media executive in America has resigned in the wake of this Me Too movement and he's my boss or he was my boss. And so that makes it hard to comment on it. Les has always treated me fairly and with respect.

Still, for me it's been another sleepless night thinking about this, the pain that women feel, the courage that it takes for women to come forward and talk about this, and I really didn't know what I was going to say this morning. I know I needed to say something.

So Gayle and I have talked and texted and I said, you know, “Gayle, I'm kind of looking back to November” when we dealt with accusations against our former co-host. And Gayle sort of said, “Yeah, but I didn't think we'd still be the story in September.” And ten months later we're still talking about this. But here's what I said back and I think it still holds and I want to say it again. There is no excuse for this alleged behavior. It is systemic and it is pervasive in our culture. And this I know is true to the core of my being. Women cannot achieve equality in the workplace or society until there is a reckoning and a taking of responsibility. So I'm really proud to work here at CBS News. This has hurt morale but there are really good people that come to work every single day. As a journalist I'm confident that the truth is going to come out because this is being investigated. There are two prominent investigations going on by some really good lawyers and this has to end and this story will continue.

DUNCAN: And we'll continue to report on it just like we would anything else.

DICKERSON:  I'm really proud to hear you say that, and I was talking to somebody this weekend who I'm very close to had something like this happen to them 30 years ago. It still stays with her. Not only the feeling in the moment, but the powerlessness afterwards. So I just couldn't agree more with what you said. Thanks, Norah.

VLAD DUTHIERS: And as you said, Jericka, you will continue to report on these developments as you always have as we as the news organization have. Thank you very much for that.