Despite a combined two and a half hours of available air time, CBS on Wednesday night and Thursday morning allowed just 94 seconds to the latest shocking sexual assault allegations against the network’s former chairman and CEO, Les Moonves. The New York Times on Wednesday offered new details on Moonves’s attempts to cover up forced oral sex against an actress.

Over the last few months, CBS has offered conflicted and pained responses to the accusations against Moonves, as well as ex-CBS This Morning co-host Charlie Rose. Often, This Morning hosts seem irritated about having to cover the alleged actions of their colleagues.

Regarding Moonves, there was no coverage on Wednesday’s CBS Evening News and a scant 94 seconds on Thursday’s CBS This Morning. Co-host Norah O’Donnell quickly noted, “Actress Bobbie Phillips told the New York Times Moonves sexually assaulted her during a 1995 meeting in his office about potential job opportunities.”

In September, Moonves was forced to step down from CBS, following allegations of sexual misconduct by at least a dozen women. He denies those allegations. According to the Times, CBS lawyers recently discovered Moonves deleted many of his text messages with [Phillips’s former manager Marv] Dauer. 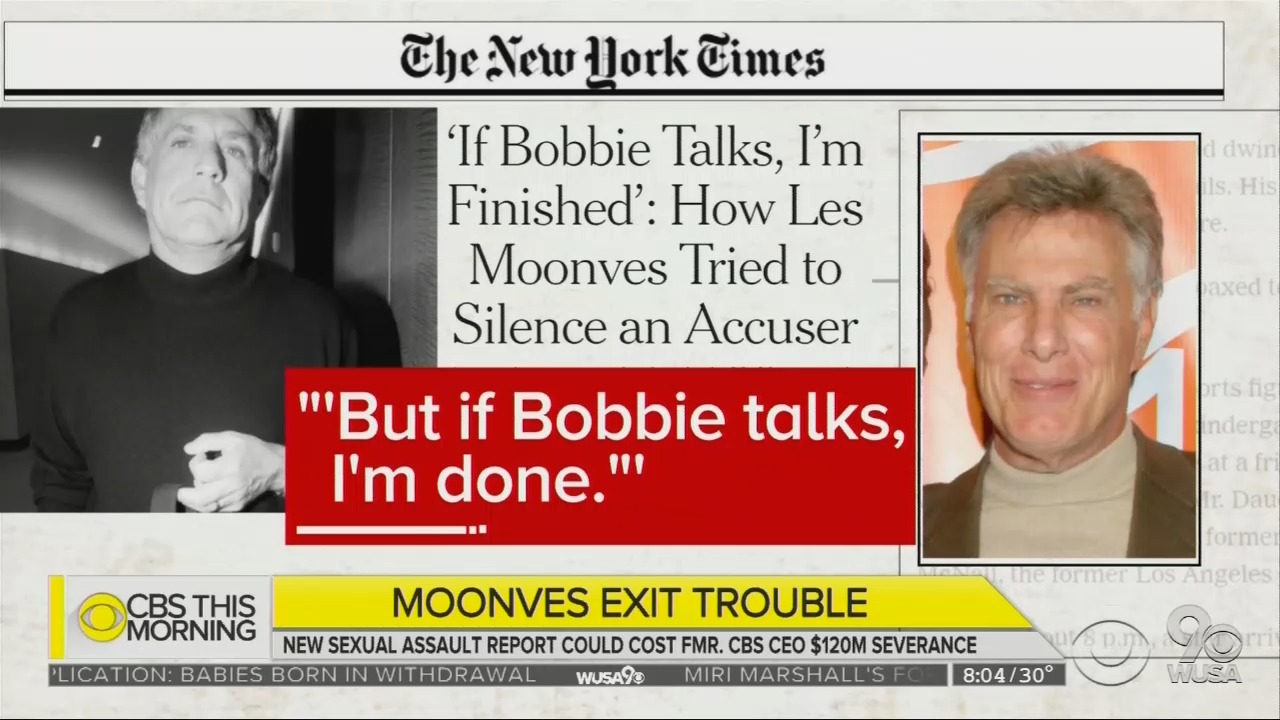 According to the Times, in one text message Moonves worried, “If Bobbie talks, I’m finished.”

Speaking as though they weren’t a part of CBS, Dickerson antiseptically explained: “We reached out to Moonves and Dauer but did not hear back. Phillips' attorney had no comment. CBS declined to comment.”

Here’s how the Times covered the shocking allegations:

In a recent interview, Ms. Phillips described what happened next. Mr. Moonves led her to an easel that showed the status of various Warner Bros. productions. She examined it, then turned to face him. “Look how hard you make me,” Mr. Moonves said. She saw that he had undone his trousers, exposing his erect penis. 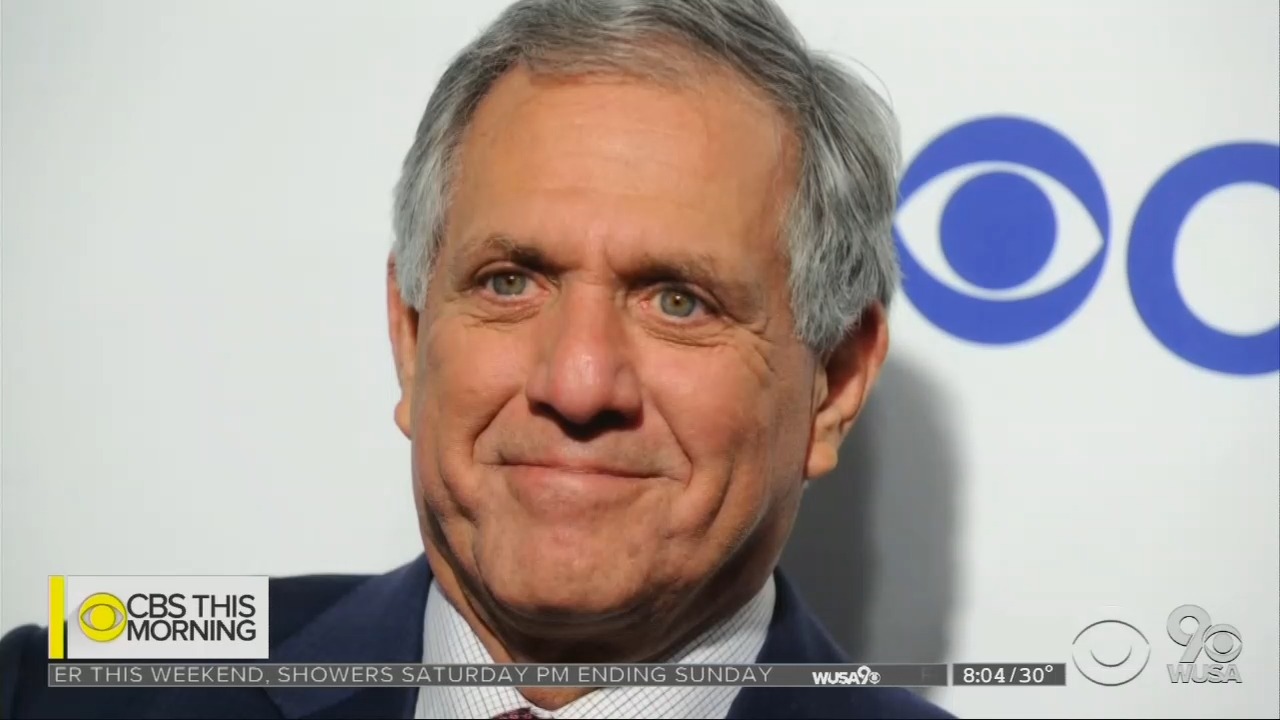 “Be my girlfriend and I’ll put you on any show,” he said, in Ms. Phillips’s recollection — and then grabbed her by the neck, pushed her to her knees and forced his penis into her mouth.

Moments later, the intercom buzzed. It was Mr. Levey returning Mr. Moonves’s call. Fumbling with his pants, Mr. Moonves returned to his desk. “I have this great actress,” Ms. Phillips heard him say.

“I felt my blood rushing in my body,” Ms. Phillips recalled. “I was vibrating. I can still feel it.” She walked to the desk. As she grabbed the bat, her eyes locked on a photo of Mr. Moonves’s wife on a bookshelf. “All I could think,” she said, “was that I wanted to use the baseball bat to knock his head off.”

In the past, co-host Gayle King expressed her irritation at having to cover the sexual abuse allegations against Moonves: On September 11, 2018, she whined, “I'm sick and sick of the story and sickened the by everything that we keep hearing.” King praised, “Les Moonves has done wonderful things for this company and we can't forget that either.”

On September 10, 2018, O’Donnell reminded: “Les has always treated me fairly and with respect.”

If this all sounds familiar, it should. On May 3, 2018, after the scandal was exposed, King whined on-air about having to cover the Rose allegations: “I don't know what to say about this....I don't know what more we can do to Charlie Rose except a public flogging. He's gone....I’m sick of handling it.”

NORAH O’DONNELL: Former CBS chairman and CEO Leslie Moonves’s $120 million severance package could be in jeopardy a new report alleges he tried to cover up a sexual assault claim. Actress Bobbie Phillips told the New York Times Moonves sexually assaulted her during a 1995 meeting in his office about potential job opportunities. In a statement to the Times, Moonves said, “I strongly believe that the sexual encounter with Ms. Phillips more than 20 years ago was consensual.”

BIANNA GOLODRYGA: The report says Moonves spoke by phone last December with Phillips’s former manager, Marv Dauer. The men agreed they discussed the possibility of getting Phillips an acting gig to keep her happy. The Times reports Dauer said in a sworn statement that Moonves knew an article about his sexual conduct was being written and told Dauer he said, quote, “If Bobbie talks, I'm done.” According to the Times, Moonves and Dauer exchanged hundreds of texts over the next several months. They discussed Phillips and trying to get her new acting opportunities, none of which she accepted.

JOHN DICKERSON: In September, Moonves was forced to step down from CBS, following allegations of sexual misconduct by at least a dozen women. He denies those allegations. According to the Times, CBS lawyers recently discovered Moonves deleted many of his text messages with Dauer. The Times says in Moonves fails to cooperate with the company investigation he could be fired for cause and lose his $120 million severance payment. We reached out to Moonves and Dauer but did not hear back. Phillips' attorney had no comment. CBS declined to comment.