Poor Gayle King. She’s really irritated at having to constantly cover the latest sex harassment and abuse allegations against Charlie Rose, her former colleague and co-host at CBS This Morning. Responding to a Washington Post expose that 27 women have accused Rose over a 30 year period, King whined: “I don't know what to say about this.... I don't know what more we can do to Charlie Rose except a public flogging. He's gone.... I’m sick of handling it.”

Speaking of the man who allegedly exposed himself to multiple women, grabbed them and made sexual comments, King still called him a friend: “When the story first broke, I said Charlie was my friend. I still consider him a friend. I know that's probably not the politically correct thing to say at this moment. But I don't believe in abandoning people when they're down.”

In fairness, King did explain: “You can't ignore what these women are saying. That's also part of my anguish here to know women were hurt and it's good we're having this conversation.” But then she added an irritated “again” to emphasize how annoying it is to cover this story.

The Washington Post on Wednesday explained the finding of its investigation: 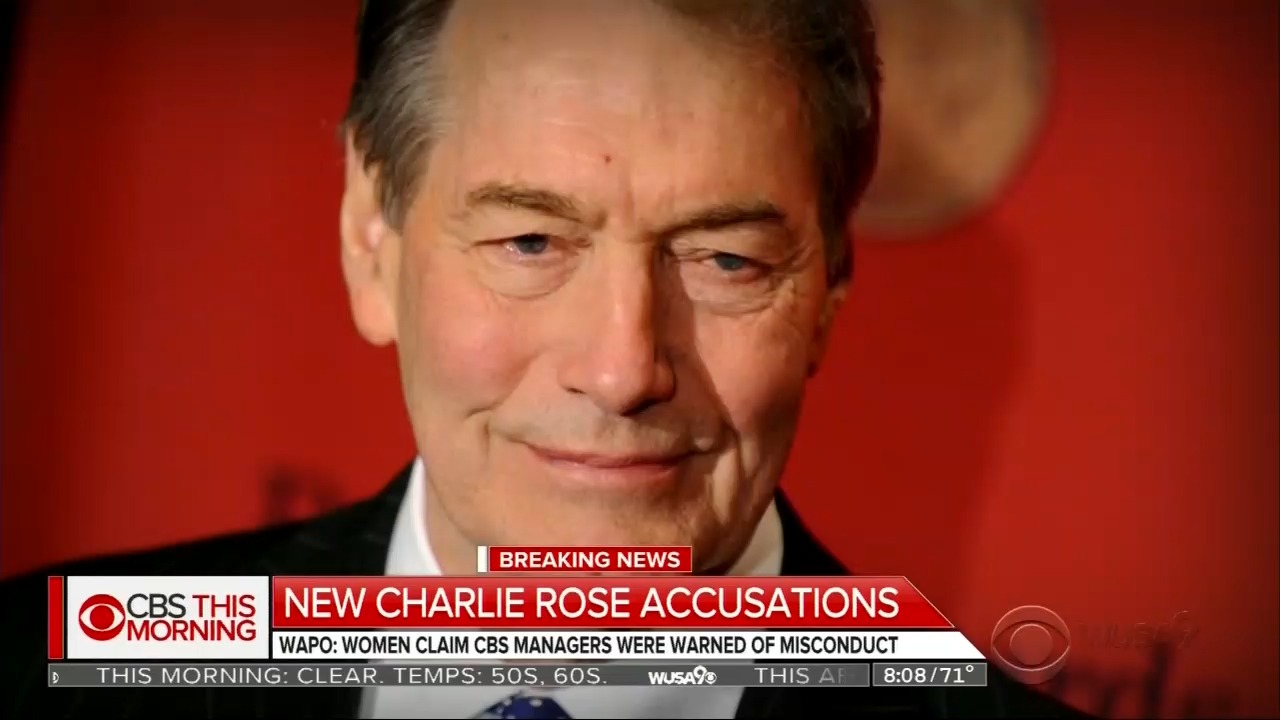 Incidents of sexual misconduct by Charlie Rose were far more numerous than previously known, according to a new investigation by The Washington Post, which also found three occasions over a period of 30 years in which CBS managers were warned of his conduct toward women at the network.

An additional 27 women — 14 CBS News employees and 13 who worked with him elsewhere — said Rose sexually harassed them. Concerns about Rose’s behavior were flagged to managers at the network as early as 1986 and as recently as April 2017, when Rose was co-anchor of “CBS This Morning,” according to multiple people with firsthand knowledge of the conversations.

On April 12, 2018 CBS This Morning co-host Norah O’Donnell admitted that Rose would have “screamed” at her if she confronted him about harassment. In 2016, Rose offered, on-air, to spank O’Donnell.

BIANNA GOLODRYGA: This morning, The Washington Post reports new allegations of sexual misconduct by former CBS This Morning anchor Charlie Rose. CBS news fired rose in November after eight women connected with his PBS program claimed he groped them, exposed himself, or spoke to them inappropriately. Jericka Duncan is here with the new allegations that, according to the newspapers, how a much wider pattern of harassment. Jericka, good morning.

JERICKA DUNCAN: Good morning. The Post reports 27 women, including CBS News employees, indicate that Rose sexually harassed them for more than a 30-year period. The paper alleges that over that time, Rose’s behavior was flagged to managers at the network as early as 1986 and as recent as April of 2017 when Rose was co-anchor of the show. In one example, when Rose worked for 60 Minutes in 2013, an employee says he grabbed her buttocks as he walked down the office hallway. There's no indication that incident was reported to management. Most recently, former CBS This Morning employee Brooks Harris left to work at Rose's PBS show where she says she experienced a number of unwanted sexual advances and comments.

She claims she was encouraged to take the job by a CBS This Morning executive producer Ryan Kadro. The Post says Kadro’s former assistant allegedly reported concerns to Kadro about Rose’s behavior towards Harris. Kadro denied being warned about inappropriate behavior by Rose to Harris and says he did not encourage her to take the job with Rose. In a statement, CBS News  said “Since we've terminated Charlie Rose, we've worked to strengthen existing systems to ensure a safe environment where everyone can do their best work.

CBS News President David Rhodes says in a statement: “We have continued to investigate a number of issues. Several important steps have already been taken including adding in-person training around misconduct and this training is mandatory.

We've convened a working group of colleagues to report issues and handle problems as management.” CBS News corporate office reported in November that it never received complaints about Charlie Rose until after his termination. The corporate office hasn’t revealed how many women have stepped forward since then. Anthony? 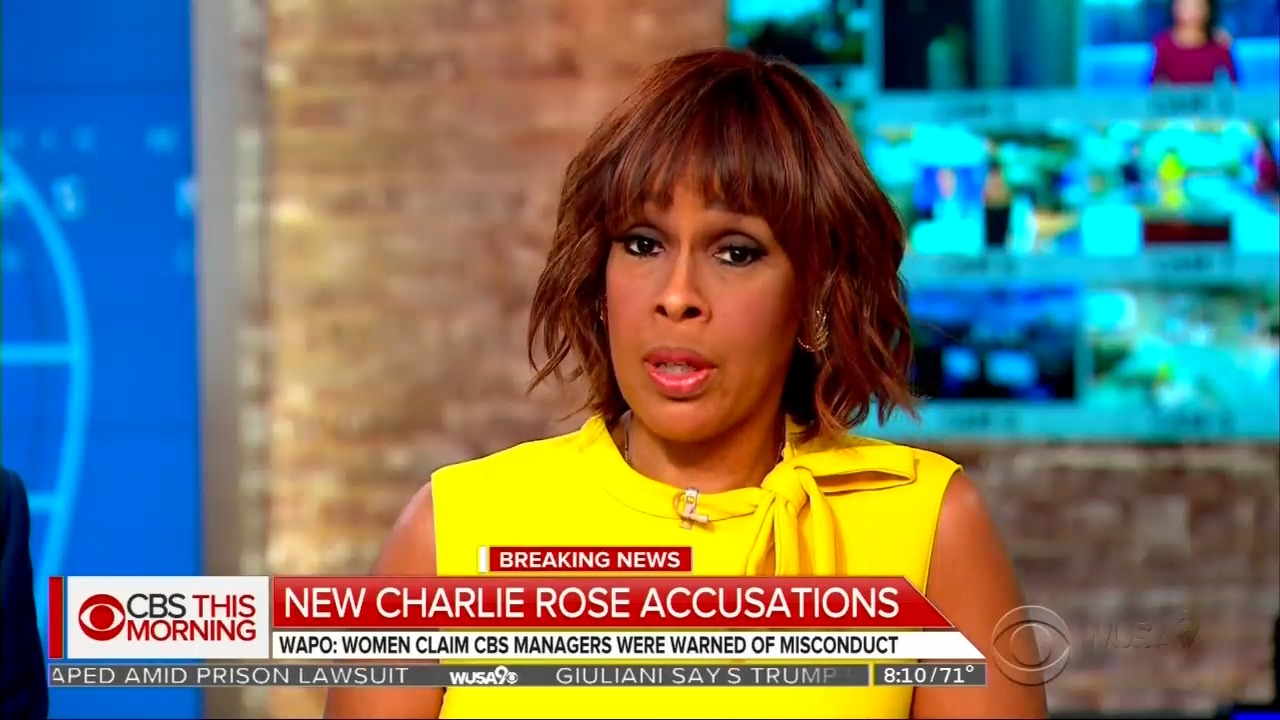 GAYLE KING: Oh, gosh. Anthony, I have a very bad case of deja Vu, I have to say. I feel sick to my stomach. I don't know what to say about this. You know, when the story first broke, I said Charlie was my friend. I still consider him a friend. I know that's probably not the politically correct thing to say at this moment. But I don’t believe in abandoning people when they're down.

That said, this is very troubling, very disturbing you can't discount what people are saying. I know all of the men who are mentioned in the management that they’re saying there, too. [sic] I have great respect for them. This is what I know. I don't know what more we can do to Charlie Rose except a public flogging. He's gone. He's not coming back to CBS News. Norah O'Donnell, John Dickerson and I are the new team. We are working very hard here. I know that we bring a quality broadcast surrounded by a quality team. All we can do is do the best possible job that we can. You see these allegations, you hear the stories, and it just makes you sick all over the again. And I don’t know what to do or say about it.

GOLODRYGA: Unfortunately you've had to handle this story for far too many mornings here.

GOLODRYGA: As we said, we would be covering this story and of course we will.