The NewsBusters Weekly Recap: December 2 to 8 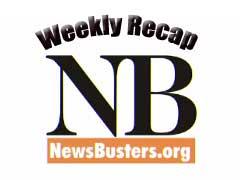 What is it about leaving a network gig that makes news anchors even more biased? Ex-host Tom Brokaw told a "Harball" audience that Barack Obama is a "rock star," lavished praise on Jon Stewart, and claimed that Ronald Reagan neglected "Mother Earth."

Speaking of NBC stars who suck up to environmentalists, Matt Lauer recently encouraged Al Gore to run for president and "save the planet." Way to stay objective, Matt!

The "Today" anchor continued his global warming obsession in another segment, lauding actor Leonardo DiCaprio for "standing up to get people thinking" about the issue. (Funny, I don’t recall the "Today" host complimenting many pro-life activists for "standing up.")

Lobbying for global warming can be tiring work, as NewsBusters editor Matthew Sheffield noted when he pointed out that CNN host Miles O’Brien fell asleep during recent hearings on the subject.

This week, the "mainstream" media continued lobbying for a complete acknowledgment of total failure in Iraq. "Time" magazine likened the Iraq Study Report to a drug intervention. Discussing the same subject, "Hardball" guest host Mike Barnicle wondered if President Bush is "delusional," " isolated" or "stubborn." Those are certainly some great options to chose from!

Journalists aren’t so negative when it comes to future presidents (well future Democratic presidents, anyway). NBC’s Andrea Mitchell recently asserted that a Hillary Clinton presidency could bring back "the good old days." Over on ABC, Kate Snow could barely contain her glee over the prospect of a Hillary ‘08 campaign. She enthused, "Maybe, just maybe, we might have a woman trying to run for president in this country."

On the same network, anchor George Stephanopoulos advocated for an energy tax, just like the kind "you see in Europe." One can only dream, right George?

Finally, on the celebrity front, two entertainers discussed world events with varying degrees of success. Comedian Dennis Miller appeared on the "Tonight Show" and brought a copy of a 1975 issue of "Newsweek" that discussed global cooling. Thus, he pointed out, perhaps we shouldn’t get so overwrought over the subject of global warming. Gwyneth Paltrow informed a media outlet that she preferred living in Great Britain because the English aren’t as "capitalistic as America." I’ll leave it to you, the reading public, to determine who made the more salient point.