[Update, 4:10 pm Tuesday: Father Grandon wrote NewsBusters to clarify his statement during the segment: "I was very clear during the interview that we convert priests have no interest in agitating for married clergy generally and that, in fact, the Catholic Church has always had married priests in her Eastern Churches, but alas, those comments were edited out.  My comment...in no way proposed that change....Yes, much was left unsaid and unexplained, but do please note that I am not on the side of the liberals!  In the end, we were happy that the editing was not as malicious as it could have been."]

On Monday's CBS This Morning, correspondent Michelle Miller highlighted one of the 77 married Catholic priests in the U.S. who converted from the Episcopal Church in recent years and boosted a favorite pet cause of left-leaning dissenting Catholics: ordaining married men. Miller trumpeted that Father Doug Grandon's example "begs the question: should all Catholic priests have the option to marry?"

Father Grandon stated that "the most we could say is that having a married priest...allows them to look and see how it would work if they wanted to change it." The morning show's religious and faith contributor, Father Edward Beck, also acknowledged that the several dozen former Episcopalian clerics are "bringing a whole liberal notion with them," but also noted one of the main reasons for Catholic clerical celibacy - that parish priests can devote all 24 hours of each day to their ministry.

The media's common ignorance of Christianity- and Catholicism specifically- was apparent from the beginning of Miller's report, which aired at the bottom of the 8 am Eastern hour. The CBS journalist admitted in her introduction that the concept of married Catholic priests "certainly surprised me. A number of priests are living lives that are not very different from the family men in their own parishes."

If the correspondent needed to find a married Catholic priest, instead of going all the way to Denver to where Father Grandon lives, she could have looked no further than the many Eastern Rite parishes in the New York City metro area. Eastern Catholics, which number in the hundreds of thousands in the U.S. (out of a total Catholic population of about 77 million), have a long tradition of married priests. The journalist omitted any mention of this different, but fully Catholic faith tradition during her report.

Later in her report, Miller gave a misleading impression of the 77 converts who became Catholic priests as she outlined Father Grandon's journey into the Church:

MILLER (voice-over) Married for thirty years, Doug has fathered six children, and enjoyed a successful career as an Episcopal pastor in the Protestant church. But in 2003, he realized his calling was with the Catholic Church.

GRANDON The Catholic Church is the fullest expression of what Jesus meant Christianity to be, and I wanted to be a part of that.

MILLER: Pope John Paul II issued a little known edict that said Protestant priests wishing to become Catholic should not break their marriage vows. It took five years of schooling, and a blessing from Pope Benedict, to make Father Doug one of 77 priests in the U.S. who have converted allegiance to the Vatican.

Actually, the "edict" was only extended to married Episcopalian ministers who converted, not to Protestants in general. After asking Father Grandon's wife about her initial reaction to his intent to convert, Miller added that "in giving up his Protestant ministry, Father Doug took a considerable pay cut. The Catholic Church hasn't quite figured out how much to pay a priest with a family. It's a good thing Lynn runs the Denver Diocese Respect Life office. She's the breadwinner now."

Besides obviously casting aspersions on the Catholic Church (not to mention the long experience of Eastern Catholicism with married priests), Miller failed to explain that a diocese's Respect Life office handles a bishop's pro-life ministries, which includes reaching out to women in difficult pregnancies, and counseling post-abortive women.

Near the end oft he report, the CBS correspondent gave her boost to the dissenting Catholics' agenda: "Father Doug says his marriage in the Church gives him a unique perspective....Which begs the question: should all Catholic priests have the option to marry?" Instead of finding a priest who seems open to changing the centuries-old discipline of priestly celibacy in the Latin rite, Miller could have turned to another convert from the Episcopal Church, Father Dwight Longenecker, who took down many of the dissenters' common arguments in favor of the married priesthood in a 2009 blog entry.

Co-anchors Erica Hill and Gayle King then brought in Father Beck and asked slanted questions about the priesthood debate. King even began by cheering on the convert priest:

BECK: At a time in my life, but I think I chose a path that precludes it. And so, no, not at this stage in my life....But I think what's interesting is you have these gentlemen coming from other traditions- like the Episcopalian Church mostly- and they're leaving because they think their traditions are too liberal. Usually, it's about women priests, gay marriage- they don't agree with it. So they want to come to the Catholic Church, but they come with their wives and kids- really putting into question this whole traditional notion of celibacy in the Catholic Church. So I think it's ironic that they're coming to be more conservative- yet, they're bringing a whole liberal notion with them....

HILL: You've also said to us, though, before on this program- you've said to us, part of the beauty, in some ways, of taking this vow of celibacy is that you're not distracted by those other things. Does it go both ways here? Is it sort of whatever works?... 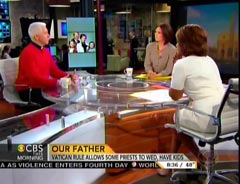 KING: You said single-minded, single-focused. Does it lead- and not being disrespectful or impolite- does it lead to a lot of frustration? It just seems so unnatural, to me, for so many people.

BECK: ...It is hard. There's no doubt about that. But I think you get something else. I become members of families in my parishes. I become intimately involved with people. And I think a wife and kids would resent the involvement that I have and the commitment to it if they were part of my life. Now, some guys can just do it on the weekend. It's a weekend job for them. But Catholics aren't used to that. Catholics are used to 24 hours- you're there. And you know, right now, we can.

While King's final question is understandable coming from a non-Catholic, one can imagine that two homosexuals in a same-sex "marriage" would never have a similar question asked of them by a major media journalist.