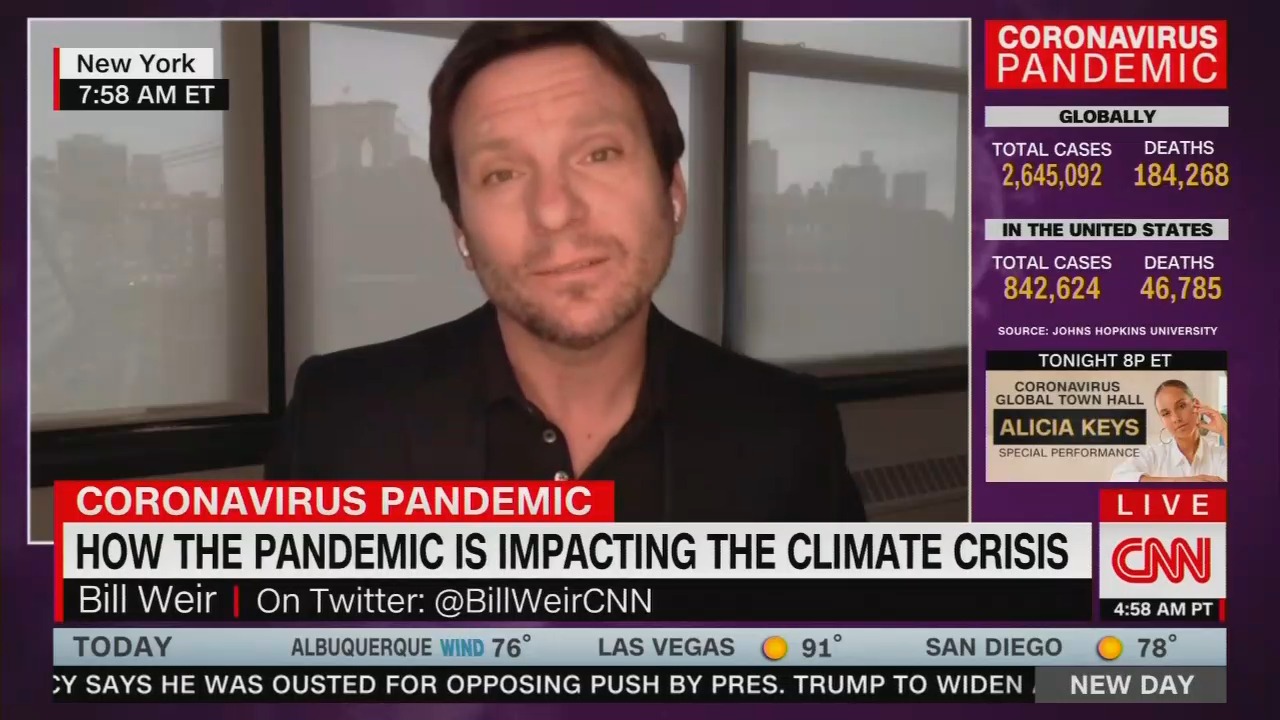 Lives have been lost, businesses have been shuttered for good, schools have been closed and millions are stressed out by the effects of coronavirus, but lefty journalists managed to find the “silver lining” to the pandemic -- a cure for climate change!

From March through May, journalists have been cooing over animals running wild in city streets and previously smog-filled vistas being cleared. And while everyone likes animals and clean air, the insensitivity shown by environmental activists masked as journalists to those who were thrown out of work or dying was staggering.

The following are the Top 14 worst examples of liberal media types discovering the “bright spot” of the coronavirus crisis:

14. Finding the “Silver Lining” of Pandemic

“Let’s talk to you about Italy. Obviously that country, its people have been devastated by the coronavirus. But there is a little bit of a silver lining in some of its historic cities. This is Venice...You can never see the waters because they’re so murky from all the boats. This time, now you can see the crystal-clear waters of the Venice canals. You can see fish swimming around in the canals....This is a map, a satellite map showing you the level of pollution that has gone away the past three months because of the reduction of emissions across northern Italy. So, there is a bit of a silver lining.”

13. Grateful to the Pandemic for Offering “Peek” of How Things Can Be

“As the world takes a pause during the coronavirus pandemic, one thing hasn’t stopped: mother nature in all its glory. There is less pollution, improved air quality and more animal sightings. Which means the COVID-19 crisis is serving as a peek at how things can be if we tackle the climate change crisis now.”

12. See What We Can Do, When We Shut Down All Manufacturing

“So if there is a silver lining to this crisis, it’s visible in the skies above China. The dramatic slowdown in manufacturing and driving has caused a reduction in carbon emissions.”

11. Time to Thank the Virus For Buying Us “Some Time”

“There seems to be this perception that maybe the virus has helped humanity buy some time when it comes to global warming.”

10. Look At All the “Improvements” the Pandemic Brought Us!

Co-host Anthony Mason: “Ahead on this Earth Day, we’ll show you the rapid and amazing environmental improvements taking place during the pandemic. What it tells us about creating a healthier planet.”...

Correspondent Jamie Yuccas: “From a shockingly smog-free New Delhi in India to unusually clear waters in the canals of Venice, the world is suddenly learning what can happen if humans stop polluting the environment.”...

Co-host Gayle King: “Something to think about there. Many people see this as a major reset for humanity and the planet. I hope we’re all listening and get the lesson. We’ll see.”

“People in northern India are getting a fresh, if distant, look at what has been shrouded by pollution for decades….the towering Himalayan Mountains...The country has been under lockdown for more than two weeks, and that has dramatically improved the air quality and visibility….There has been a trend of cities worldwide reporting cleaner air since the lockdowns were put into place....Finally, you know, this is a bright spot in this era of pandemic.”

8. Humans Were Always the Real Virus

“Here in New York and in many other cities around the world, even underneath the mask, if you take a deep breath, you can tell the air is cleaner and clearer. One of the unintended consequences of the shutdown….With fewer cars, planes and factories, the change is stunning. The murky waters of Venice’s famous canals now clear. In Wuhan, China, according to NASA, air quality improved 30 percent almost 50 percent in Milan, Italy. Skies clearer in L.A., the Himalayas finally visible.”

7. All Those Hard-Working Venetians “Mucking Up” Nature’s “Tranquility”

Correspondent Chris Livesay: “As hard as the lockdown has been on all of us, there’s one silver lining no one can deny: staying at home has been largely good for the environment. And here in Venice, this lagoon city has returned to its pre-industrial tranquility. Venice, perhaps more than any other city under lockdown, has gone from one extreme to the other. The Rialto Bridge, the Grand Canal, even St. Mark’s square deserted. Streets and canals usually awash with tourists now so still nature is filling the void.”...

Co-host Anthony Mason: “Such a beautiful city. And it’s lovely to see it empty, Gayle, but it — as Chris said, it can’t survive that way.”

Co-host Gayle King: “Yeah. Look at the human beings mucking everything up.”

6. Coronavirus Is the Cure for Climate Change

“If there is a silver lining in coronavirus news, it is this: The economic shutdown is causing at least temporary relief from air and water pollution….Could this be a harbinger of a low-carbon future? Or could economic and political pressure turn the clock back again on climate regulation?...We’ve got many people who are activists and scientists on this who just hope this is   going to be a turning point….airliners haven’t been flying in the way that they normally do...That’s great news for the planet, great news for us, but, again, is it sustainable?”

5. Time to Celebrate! Earth Can “Get Along Fine” Without Humans

Anchor Norah O’Donnell: “Tonight, we mark the 50th anniversary of Earth Day. There were supposed to be big celebrations around the world, but instead, people are celebrating inside and they’re celebrating cleaner air and cleaner water.”....

Correspondent John Blackstone: “From goats in a deserted town in Wales, to lions lounging on a road in South Africa; nature seems to be saying, ‘We can get along fine without you.’”

4. Hopefully Pandemic Taught Us All a Lesson About Big Business

Host Christiane Amanpour: “Tell me about how covid is going to, I don’t know, is it going to work out — could it have a silver lining in terms of how we figure out our place  — we humans in the natural world  — what we’ve done to potentially disrupt the natural world? Where do you think this could lead?”...

Primatologist Jane Goodall: “We brought this on ourselves. A pandemic like this has been predicted. We’ve had epidemics galore, and it’s because we’ve disrespected the natural world and the animals who live there. And we cut down forests….then we’ve got our factory farms....So we have brought this on ourselves, and people have known about it and been telling us about it, but we prefer to go on with business as usual to make money and attain power in the short term and not worry about future generations or the health of the planet.”

“This [pandemic] is like a coming attraction trailer given to us from Mother Nature. That if we were shocked by this….we don’t really know what nature is going to do to us….Nature has given us this warning....and we should be using this time to think about how, when we come out of this, how we’re going to treat this planet.”

2. Mother Nature “Hissed” At Us

“Looking back, Mother Earth was starting to clear her throat and make herself heard. Australian bushfires were ravaging the continent. Earth had registered its highest temperatures since records began….Now that the planet has essentially hissed, ‘I will not be ignored,’ how do we confront the climate emergency?...From Shanghai to Secaucus, by circumstance and not design, a glimpse of life with fewer fossil fuels. And already the clean and quiet surroundings have found favor with wildlife.”

“My dearest River, Against all odds you were conceived in a lighthouse, born during a pandemic and will taste just enough of Life as We Knew It to resent us when it’s gone. I’m sorry. I’m sorry we broke your sea and your sky and shortened the wings of the nightingale. I’m sorry that the Great Barrier Reef is no longer great, that we value Amazon™ more than the Amazon and that the waterfront neighborhood where you burble in my arms could be condemned by rising seas before you’re old enough for a mortgage….As you get older, this will be hard to understand. But we were under the spell of Genesis 1:28: to take dominion over every living thing. We had the strange urge to carve straight lines out of nature’s curves and were under the spell of a uniquely human force called ‘profit motive.’”

—  CNN chief climate correspondent Bill Weir in a letter to his newborn son as posted on CNN.com, April 25.