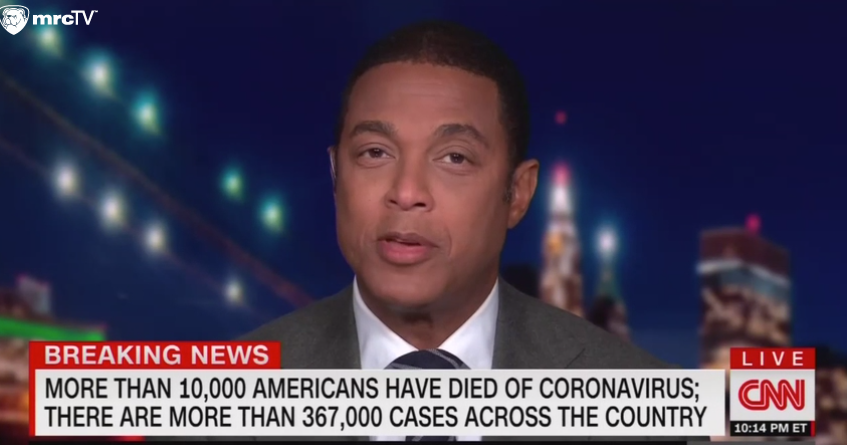 From CNN host Chris Cuomo blasting Trump trying to keep the country’s spirits high as “bullsh*t” to his CNN colleague Don Lemon pontificating about the President’s “lying” the following are 16 terrible takes on Trump’s handling of the coronavirus crisis:

Host Chris Cuomo: “That was the most asinine statement of leadership I have ever heard.... ‘I’m a cheerleader. So, I’m going to lie to you about the realities that your parents, your loved ones, and your kids face. I’m not going to prepare the way I should because it reinforces the bullshit I’m telling you. And I’m going to hope you’re okay with it.’ We have to do better than that. This President must do better than that. The good news is, he can. The bad news is, he refuses to.”

“I watched the debacle yesterday and I was furious when he [Donald Trump] called you a third-rate reporter. I wanted you to say, ‘No, darling, you are a third-rate President.’ I want the reporters to call him out on his lying. I want the reporters to follow up on questions, and if you can’t get a real good answer, the correct answer, I want you all to get up and walk out. That’s what I want. Can you do that? For me and fellow Americans who are watching this in horror?”

“They believe him! There are people who believe him because he’s the President of the United States, and he’s giving misinformation to their own peril. People are dying because of some of the information that’s being disseminated from these clown press conferences.”

“I can’t think of a more collective act of the American people watching day after day, the inconsistency and untruths and misleading, confusing and response by the federal government in the form of the president over the last few months…. I wrote about them [Trump pandemic briefings] as comparable to, if not worse than, the ‘5 O’Clock Follies’ during the Vietnam era in which the Pentagon lied to the American people about the Vietnam war. I believe that this is Donald Trump’s version of that.”

“The President is so intent on justifying everything he’s done that he's acting more like a churlish monarch then a leading figure in a democracy....The President of the moment would be an Avengers team. It would be Franklin Roosevelt with his sense of hope and his bold, persistent experimentation….If we could have an FDR, if we could have Lyndon Johnson — who could make the private sector do exactly what he wanted them to do — and if we could have Barack Obama with that devotion to science and fact….A reasonable person, looking at the way the President has acted, would find him just remarkably incommensurate with the task of the presidency….I am interested in why so many of us have suspended our better judgment and our better angels in this moment.”

11. Do You “Talk to God” About Those Who Died Because You Acted Late?

“When you talk to God in your moments alone, do you find yourself worrying at all that people you represent and care deeply about have died and will die -- who did not need to -- because of steps the federal government did not take soon enough?”

10. Trump Hijacked His Own Briefings?

“What we saw was a hijacking — a hijacking of the task force press conference by a President determined to rewrite the history of his early and reprehensibly irresponsible response to this virus. What the President showed us today is what the nation’s top scientists have to deal with every day, a President who now uses these briefings as a re-election platform, an opportunity to lie, to deflect, to attack, to bully, and cover up his own deadly dismissals of the virus for crucial weeks.”

“I think he [Donald Trump] feels a sense of injustice that the good conditions that he was running for re-election on have been taken away and he’s reacting, in a way, frankly, that authoritarian leaders behave: ‘You can’t question me, I’m the leader of the country, what I say is true.’ And we can all see what the consequences of American life are at this moment. That is on his watch and he’s got to take responsibility for it.”

8. “Death After Death” On Trump Because He Is Wasting Time of Lifesavers

“They’re [Dr. Anthony Fauci and Dr. Deborah Birx are] trying to save American lives and he has them scrambling for 90 minutes to prepare for a two-hour news conference. He’s going to exhaust his top-tier, so that he can get his needy camera time. So that he can get out there and riff, quite frankly, illiterately.….The President is getting in the way of progress and taking time away from the team that is supposed to be helping us get out of this crisis. He wasted our time and theirs....There is death after death after death that is on the President’s watch, on his watch. And when he takes that time away from the American people and from the people fighting this virus, he is preventing this situation from getting any better.”

7. Can Trump At Least “Pretend to Care” About “Loss of Life?”

“He’s in open war with Doctors Fauci and Birx about prescribing a drug that hasn’t been researched and hasn’t been proven as therapeutic for COVID-19. Is there anything, or anyone, that can tell [Trump] pump the brakes, at least pretend to care about the loss of life and the real trauma his country’s experiencing?”

6. More People Are “Going to Die” Because of Trump’s “Incompetence”

“The reaction was incompetent and inadequate. I don’t think it’s actually an overstatement to say that Donald Trump has -- there are tens of thousands of people who will die in the country, or have some hope of them have already died, more are still going to die because of Donald Trump’s incompetence and lack of leadership.”

5. To Trump Voters: Your “Loved Ones” Are Dying Because of President’s “Foolishness”

“People are dying because of his foolishness. It’s really foolishness at this point. You know, America -- you know, folks who loved him, fine. You voted for him. You stuck it to the elites for three years. But now your loved ones can die. The game’s over. This isn’t reality TV anymore. People are dying and this guy is acting a fool.”

“His delays, his incompetence, his ignorance has turned deadly. So there’s been a deadly consequence for the fact that Donald Trump is sitting in the Oval Office as the most unprepared president in American history to deal with any type of crisis, let alone a crisis of this magnitude.”

3. Trump Will Have Killed “More People Than Vietnam War”

“We will see that the Trump administration, because of the character of the person at the top, created a reality distortion field that slowed and warped a response that is going to kill more people than the Vietnam War did.”

“If Biden is serious about winning, he needs to accuse Trump of willingness to kill people.”

1. Self-Important Don Lemon Scolds: “How Many People Have to Die?”

“I swear I feel like I’m in the movie Network. I feel like Howard Beale. Americans are mad as hell. What are you going to — how much more can Americans take? Every single day  [Donald Trump] berating people, lying. First, it’s a hoax. And then ‘All along I knew it was serious, I knew it was a pandemic.’ How much more — how many people have to die?”

New York Times Gloats: Conservatism Seems Like a “Relic From a Distant Time”

“The 2020 edition of the Conservative Political Action Conference....in February offered a theme-park version of what was to be President Trump’s re-election message: Under the banner of ‘America vs. Socialism,’ the convention featured anti-Marx branded popcorn, an RV emblazoned with the words ‘Socialism Takes Capitalism Creates’ and a children’s book promoting personal freedom and private-property rights. Speeches included tirades against big government and ‘Medicare for all.’....Four weeks later, with the coronavirus sinking the American economy, the federal government was preparing to cut $1,200 checks to tens of millions of citizens….And the CPAC message seemed a relic from a distant time.”