After thinking that having a seven-hour-long town hall about climate change was a great idea, CNN returned Thursday night with a four-and-a-half hour town hall partnering with the Human Rights Campaign (HRC) about LGBTQ issues.

Rampant protests calling attention to black trans women, Chris Cuomo joking about preferred pronouns, and flat-out abuse with transgender elementary-age children were just a few of the things that transpired.

Below is a Notable Quotables-style package of the craziest questions. The following round-up does not include the absolutely ludicrous meltdown by transgender woman Blossom Brown during Beto O’Rourke’s portion. My colleague Nick Fondacaro covered all the bases here.

Co-host Dana Bash: We are excited first to hear from Rachel Gonzalez who is from Dallas, Texas, and she is the mother of three children, including a nine-year-old transgender daughter. Rachel is a member of the Human Rights Campaign Parents for Transgender Equality Council. Rachel? 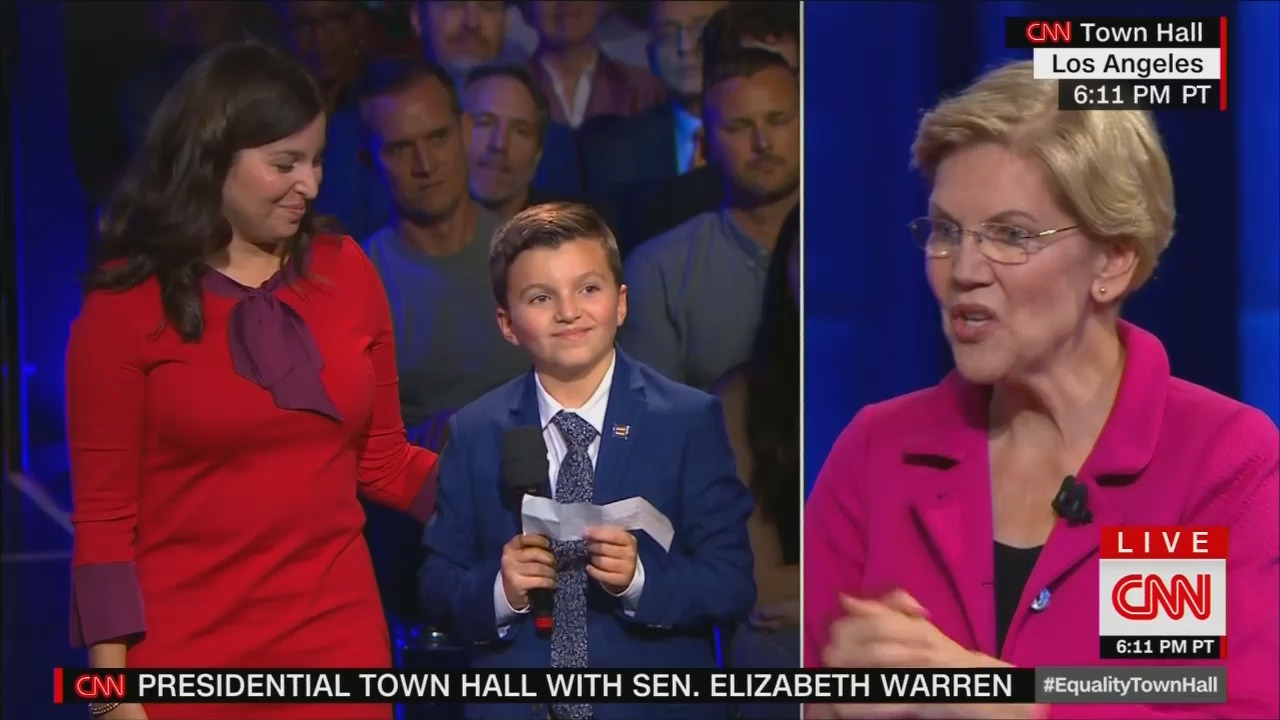 Rachel Gonzalez: We know that the civil rights legislation did not end racism, and we know that the equality act will not end homophobia, transphobia or bias. As a leader, what will you do to change hearts and minds across the country to have true equity, safety and inclusion?
- Cory Booker: Equality Town Hall, 7:30 p.m. Eastern half-hour

Jacob Lemay: My name is Jacob and I'm a nine-year-old transgender American. My question is — [CHEERS AND APPLAUSE] — what will you do in your first week as president to make sure that kids like me feel safer in schools and what do you think schools need to do better to make sure I don't have to worry about anything but my homework?
- Elizabeth Warren: Equality Town Hall, 9:00 p.m. Eastern half-hour

Bash: And Senator, a follow-up on this. Do you think that religious education institutions should lose their tax-exempt status if they oppose LGBTQ rights?....So would they lose their tax exempt status?
- Cory Booker: Equality Town Hall, 7:30 p.m. Eastern half-hour

Andrew Boden: As you know in 27 states, including my state of Florida, LGBTQ people can be denied service in restaurants and other public spaces based on who they love or who they're perceived to love. Restaurant owners can deny service based on so-called religious liberty. As a Christian, can you point to teachings in faith that are shall not serve gay people meatloaf in diners. [LAUGHTER] or other religious verse which provide instruction to the faithful to deny service, housing, or other services to LGBTQ people?
- Pete Buttigieg: Equality Town Hall, 8:30 p.m. Eastern half-hour

Don Lemon: Do you think religious institutions like colleges, churches, charities, should they lose their tax exempt status if they oppose same sex marriage?
Beto O’Rouke: Yes. There can be no reward, no benefit, no tax break for anyone or any institution, any organization in America that denies the full human rights and the full civil rights of every single one of us[.]
- Beto O’Rouke: Equality Town Hall, 10:00 p.m. Eastern half-hour

Johnny Schaeffer: Evangelicals calling themselves Christians are claiming they’re being forced to do business with gay people infringes upon their religious freedom. But my husband Paco and I were married in a beautiful Lutheran church ceremony by a congregation that embraces our love for each other. Isn't our religious freedom being violated by those who wish to discriminate against us?
- Amy Klobuchar: Equality Town Hall, 10:30 p.m. Eastern half-hour

Unsure Whether Buttigieg Is ‘Adequate’ Member of ‘Queer Community’

Robby Goldman: So as I know you're aware, queer people are not a monolith. We are as diverse as our country. As the first openly gay presidential candidate, you have faced questions on whether you are an adequate representative of the queer community. I too have felt pressured at time to be, “the right kind of gay.” As president, how would you be an advocate for the queer community in the U.S. even without being everyone's preferred definition of gay?
- Pete Buttigeg: Equality Town Hall, 8:30 p.m. Eastern half-hour

June Crenshaw: You've proposed outlawing conversion therapy, repealing the trans military ban, and strengthening federal nondiscrimination laws. All of these are really important priorities. But a lot of them are geared toward white LGBTQ folks whereas other issues surrounding non-white, black and brown LGBTQ people like youth homelessness and hate crimes heavily impact the black and brown community. So how will you pay attention to all of the important priorities you've outlined in addition to homelessness and hate crimes?
- Elizabeth Warren: Equality Town Hall, 9:00 p.m. Eastern half-hour

Chris Cuomo: Good to see you, Senator. Thank you for joining us.
Senator Kamala Harris (D-CA): How are you?
Cuomo: Appreciate it.
Harris: How are you? Thank you, guys. My pronouns are she, her and hers.
Cuomo: She, her, and hers? Mine too.
Harris: Alright.
- Kamala Harris: Equality Town Hall, 9:31 p.m. Eastern half-hour

Oscar Buckwald: I currently identify as non-binary. In California I am able to change any gender to “X.” However, on the federal level there is no such option. Will you recognize third gender markers on a federal level?
- Amy Klobuchar: Equality Town Hall, 10:00 p.m. Eastern half-hour

Nia-Malika Henderson: And next, Secretary Castro, I want to bring in Shea Diamond. A singer/songwriter from Los Angeles. She currently supports Mayor Pete Buttigieg. Shea, what's your question?
Shea Diamond: Um, it's Shea Diamond.
Henderson: Shea Diamond.
Diamond: Put that on record.
Henderson: Okay. It’s on the record, thank you.
Diamond: Yes, honey, it’s violence to misgender or to alter a name of a transperson. So always get that right first.
- Julian Castro: Equality Town Hall, 11:00 p.m. Eastern half-hour

Man Asks If There Should Be LGBTQ Undersecretary of Defense

Robert Tindall: How would you ensure that LGBT people are represented in the military command positions? Specifically, would you consider having an LGBT person as the undersecretary reporting to the secretary of defense? And how would you choose that person?
- Tom Steyer: Equality Town Hall, 11:30 p.m. Eastern half-hour

Brandon Wolf: On June 12, 2016, I was present as a man with an assault weapon murdered 49 mostly LGBTQ people of color at Pulse Nightclub. I was very lucky to make it out. Unfortunately, my friends were not. That night we were reminded that LGBTQ people specifically those of color are often, too often, the targets of hate violence. With the rise of violence against transwomen of color, how will you ensure that law enforcement is equipped to treat marginalized victims of crime with dignity and respect?
- Cory Booker: Equality Town Hall, 7:30 p.m. Eastern half-hour 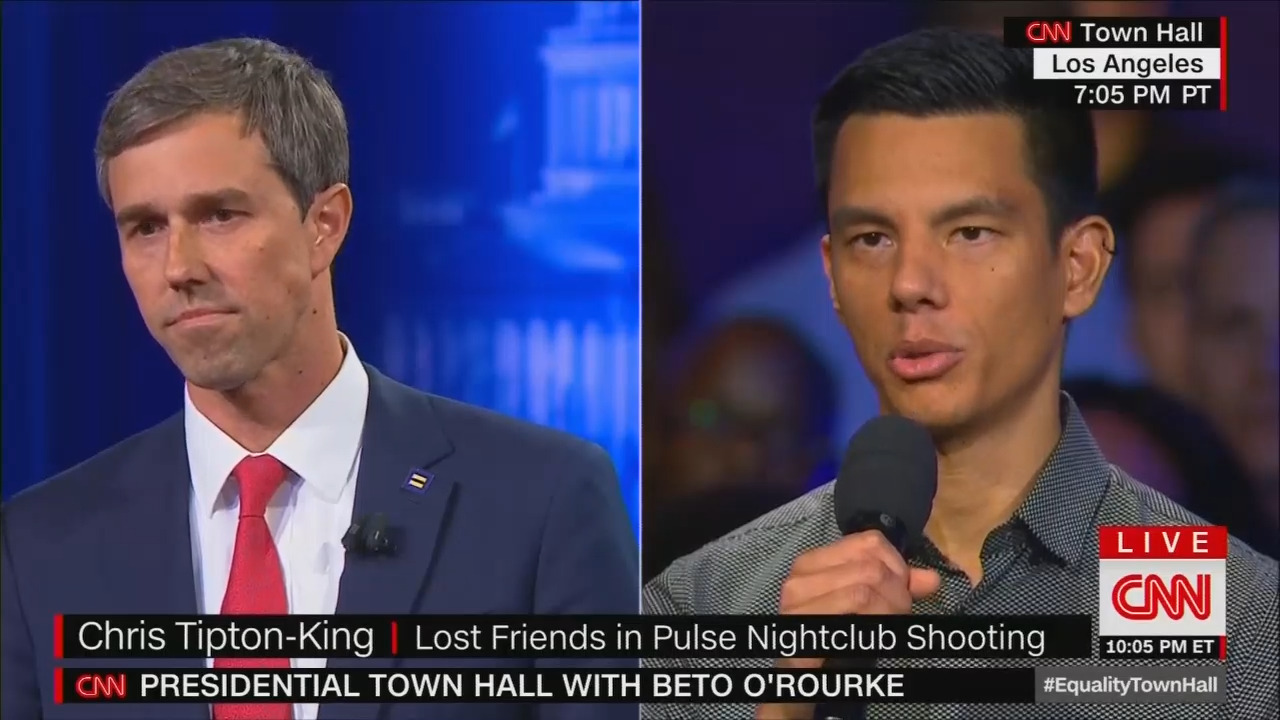 Chris Tipton-King: My friends Drew and Juan were shot at pulse nightclub in 2016. I’d like to know what you would do differently to break the impasse on gun control because I've had all the thoughts and prayers I can take.
- Beto O’Rouke: Equality Town Hall, 10:00 p.m. Eastern half-hour

John Blevins: So, this community has been traumatized by gun violence and mass shootings just as many other communities have. However, this community has faced life threatening dangers in the past and we’ve been successful in changing public attitudes faster than we expected because we’ve had the extreme cross-culture and cross-societal make-up. Yet we haven't seen a presidential candidate that leveraged our movement strengths to bring about gun reform. How would you?
- Julian Castro: Equality Town Hall, 10:00 p.m. Eastern half-hour