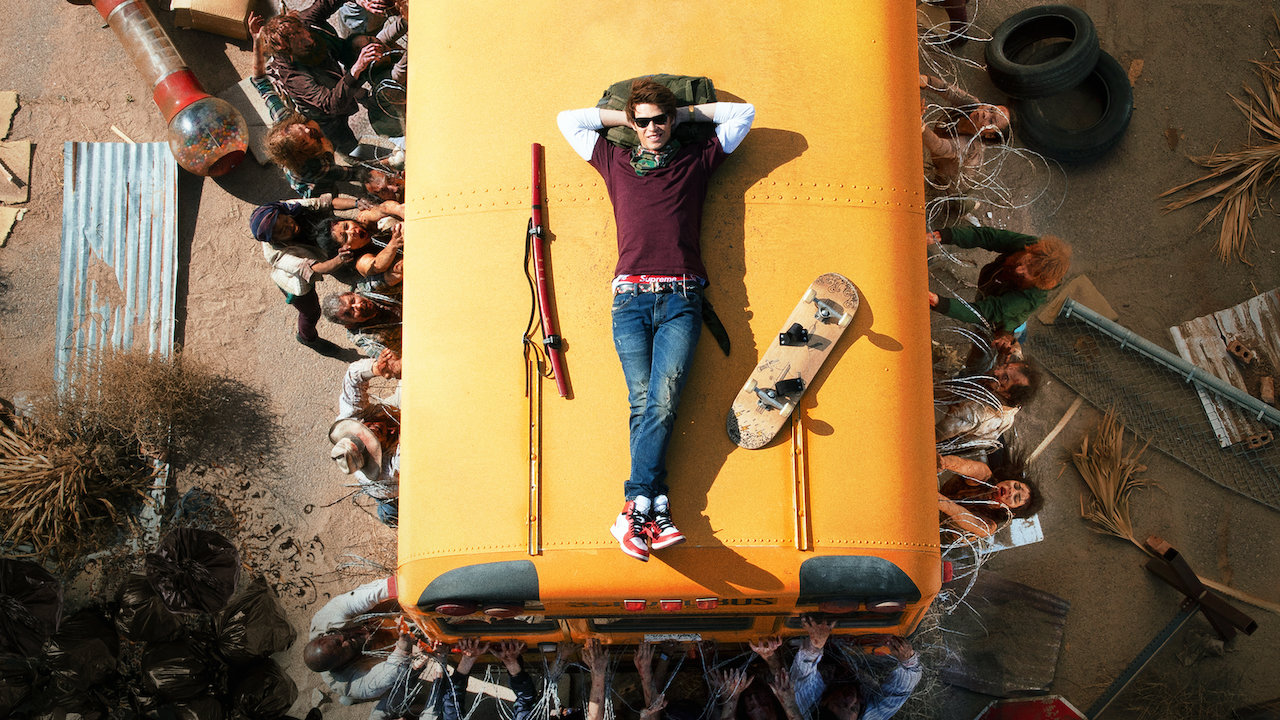 This is sadly starting to become routine. On October 24, Netflix released yet another teen show with obnoxious, foul-mouthed kids acting “woke” and being self-obsessed to the point of to the point of killing each other. The only difference now is that it involves the apocalypse. Basically, that makes it The Society with more violence.

Based on the comic by the same name, Daybreak follows 17-year-old Josh Wheeler (Colin Ford) as he navigates the post-apocalyptic zone of Glendale, California, to find his ex-girlfriend Sam (Sophie Simnett). Following a nuclear holocaust, everyone over eighteen was either vaporized or turned into flesh-eating zombies while teens inherited the earth. Over the course of the 10-episode season, we travel across Glendale and meet a variety of these young characters in this brave new world.

The pilot, “Josh vs. the Apocalypse: Part 1,” contextualizes the apocalypse with jabs at climate deniers, corporations, and Trump.

Josh: Not like I’m anything special. I’m a C student. C as in “crappy.” C as in “cannot catch a break.” C as in “let’s just see how bad things are.” Climate change deniers are standing waist-deep in hurricane water. Corporations make billions off of nerd culture, making outsiders like…the new insiders, leaving the truly odd with…no way to self-identify. And little dictators with big egos? Well, they can launch a nuke with a tweet! And one day-Whoa!

There are still some people far worse than Josh. He’s accompanied by 10-year-old Angelica Green (Alyvia Alyn Lind), a genius pyromaniac who sounds, to quote Josh, “like a racist grandma.” Her first scene literally involves threatening thugs with a Molotov cocktail shouting, “Any of you sh*t-dips move, and we have Burning Man Festival early.” Prior to the apocalypse, she also frequented as a drug lord distributing her own combinations of Ritalin, Adderall, and other drugs to the local high school. Again, she’s not even a teenager, and she’s probably the worst offender.

Being a teen show in 2019, however, it also couldn’t avoid making sure the story was sufficiently “woke.” There’s some obvious self-recrimination over Josh being the “cis” and “white male” narrator, so we also have Wesley Fists (yes, that's really Austin Crute's character's name), a black gay former jock who’s caught up in his own drama with his hypermasculine jock boyfriend Turbo (Cody Kearsley). That’s tackling toxic masculinity and gay issues at the same time!

Despite the male focus of the show, we also have a lot of feminist perspectives, as well: namely, anti-male perspectives. Demi (Jade Payton), the leader of the Cheermazons (a group of cheerleaders who went rogue after the apocalypse) says just as much as she attempts to kill Wesley for the crime of simply being male.

Wesley: You and I don’t have any beef.

Demi: We’ve been fighting a forever war. In 6000 years of history, women could only vote for the last hundred. Women make up half of America, and we never elected a female President. Men fucked the world like it was a Tinder hookup. And now, women are gonna swipe left.

Wesley: So you’re gonna kill all the men?

Even beyond those horrible details, the show manages to be a moral mess. There are constant f-bombs, even from young children. Half of episode 9, “Josh vs. the Apocalypse: Part 2,” focuses on the sexual activity between Josh and Sam, only to reveal that Sam, a teenager, has already had 50 partners, both men and women.

On the bright side, there’s no nudity or abortion, which sadly makes it better than some teen shows these days. On the downside, Daybreak still represents everything that’s wrong with television today. It’s ultra-violent, vulgar, and can’t resist the urge to shove in a progressive narrative even for a young audience. It’s a good thing this show is about the apocalypse, because I don’t think a society like that can last very long.