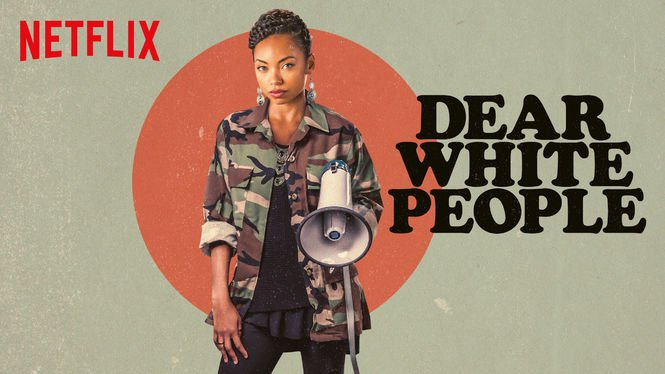 The controversial Netflix series Dear White People was finally released on Friday, April 28, and let me tell you, the "dear" in the title is NOT a term of endearment. In fact, to quote one of the show's writers, F*** White People would probably have been more appropriate, with cops and Republicans being singled out for particular hatred.

The series is supposedly based on a compilation of various life experiences from Director Justin Simien’s time at a mostly white university as a young black man. The focus of the story, a Halloween party with white students in blackface, did not happen in the real life of Simien, but we are to believe that it happens so frequently that it’s the raison d’être for both a movie and the subsequent Netflix adaptation, which adds on an innocent black man being held at gunpoint by racist campus police.

In the 10 half-hour episodes of season one, a mix of millennial college angst, romantic entanglements, and budding social justice warrior activism simmers together in a racial melting pot ready to boil over at Winchester University, a fictional Ivy League school of mostly white students. Each episode features a different character’s overlapping viewpoint, giving us further insight into their backgrounds while also slowly moving the plot forward.

“Chapter I” begins with Samantha “Sam” White (Logan Browning), a junior media studies major and local provocateur, she is the creator of the “Dear White People” segment – a platform for her social justice warrior rants about white people on the campus radio station. This is met with approval from many at the university, with one white girl affirming, “White people are the fucking worst.”

Naturally, Republicans are mocked in the first five minutes of the series. During a discussion about McDonald’s McRib sandwiches (yes, really) Sam and her bestie Joelle (Ashley Blaine Featherson) bizarrely blame the GOP for its invention in the 1980s so that blacks could be destroyed, along with crack and Jerry Springer. Springer is a raging leftist, but never mind. “Suck it, Reagan, I’m still here,” says Joelle.

[Language Warning for All Videos]

Sam is in a war with the campus humor magazine Pastiche because they mock her rants against white people and claim she is trying to censor them. When she finds out that they had planned a “Dear Black People Party,” but then thought better of it, she hacks into their account and has them send out a campus-wide invitation anyway. Sam then organizes the various black student organizations on campus to crash the party to show their displeasure and expose all the white racists who show up wearing blackface on campus.

The irony is that Sam is biracial and secretly dating a white T.I. in the media studies department named Gabe Mitchell (John Patrick Amedori). Her black friends are less than pleased when they find out – Joelle says, “I’m not sure I could let a white man colonize my body,” and calls Gabe “Disney Channel Obama” because he’s a community organizer.

In Chapter VI, Sam meets two of Gabe’s white friends at a trendy coffee shop. The stereotypical white hipsters bemoan “institutional racism” at their school and the “New Jim Crow.” They make fun of Gabe’s Bush-supporting (even Jeb!) parents and mock Republicans by saying things like the deck of their yacht “is made of endangered rhino bones” and they think caviar “is like the salty tears of poor people.”

Chapter II is about Lionel Higgins (DeRon Horton), who covered the blackface party story. Lionel is a budding reporter at the university’s independent newspaper, but clashes with his editor who wants him to report only the facts when Lionel tries to inject his own commentary. Lionel argues against reporting the revelation that Sam was behind the black face party because it hurts his cause. He says, “We’re on the wrong side here” – wow, he’ll fit in perfectly with the liberal activist mainstream media when he graduates!

When Lionel has lunch with his roommate Troy Fairbank’s (Brandon P. Bell) friends, we are treated to more conservative bashing. Being a fiscal conservative is defined as “fancy talk for ‘fuck poor people.’” One black student taunts another by condemning him for having “a framed picture of Reagan in your dorm room,” and another is accused of having “a framed picture of Stacey Dash.” Yes, it’s that lame.

Troy is later derisively called “Clarence Thomas” after chatting up some sorority girls while campaigning to be the campus’s first black student body president. To any conservative this would be a compliment, but we know it is meant to be a terrible insult.

In “Chapter V,” racial tensions on campus come to a head. During a house party, two students, one white and one black, begin to argue over a song being played. The white student sang the N-word as he rapped along and the black student, Reggie Green (Marque Richardson), called him on it. The argument escalates and the campus security police are called.

A white cop questions if Reggie is a student there and demands to see his identification. When Reggie refuses the cops grow more aggressive. Reggie then yells, “Fuck these pigs, man,” which is never a good thing, but the cop had the outrageous response of drawing his gun on Reggie to demand the ID.

We are meant to feel Reggie’s terror at being one wrong move away from being killed as he slowly and shakily pulls out his wallet to show his student identification, but this scene would have been more powerful if they had chosen a more realistic scenario. Instead we are to suspend belief and accept that a cop would ignore one of the golden rules of gun safety – be sure of your target and what’s behind it – and be ready to use a loaded gun on a black man standing in the middle of a crowded room full of innocent bystanders bearing camera phones, all to simply check an ID.

Reggie is very shaken up by the incident and it inspires him to write and perform a very silly coffee house slam poem reciting the words of the Declaration of Independence and saying if “you’re loud and black and possess an opinion then all you get is a bullet.” Of course, Sam calls it “fearless and honest.”

After the police escalation, the threads of growing activism continue to weave through the episodes. Usually out-foxed by university administrators – tickets required for a pep rally that was to be disrupted, for instance – the black students and Gabe forge on.

A town hall style meeting is planned by the administration for students to voice concerns about the campus cop incident, but that’s not good enough for Sam and her comrades. The black students are in demonstration mode and plan to show up and protest.

In a humorous scene, their plans are somewhat foiled by a concurrent anti-drinking protest based on the death of a stupid drunk student who thought he could fly, then Pastiche comes in with nonsensical signs mocking them and chanting, “Black lives matter, so do blue, we’ve got shit to whine about, too!”

While all of this is happening, Troy finds himself locked out of the town hall and he busts the glass door in frustration. The campus police move in to arrest him and as a white cop reaches for his holster, his father (a dean at the school) comes running out yelling, “Stop! That’s my son!” Handcuffed, golden boy Troy is hauled away and that is how the series ends.

In a total of five hours of viewing, there were two instances of altercations between students and campus security police. In both, the white cops were portrayed as overly reactionary and the black students were made to be victims. This is dishonest, though, as neither were, indeed, victims or villains but making poor individual behavioral decisions.

I don’t think this series sheds any new light on racial relations in America. If anything, it exacerbates divisions, using false stereotypes of white racist police brutality as a bludgeon against all “white people.”

Towards the end of the finale, the editor of Pastiche says to Sam, “Just ask yourself, has anything that you’ve done actually made things better?” The answer, for the students at Winchester University and for real-life Black Lives Matter protesters on campuses and in cities across our country, is a resounding NO.