Well, it’s no surprise NBC’s Superstore continues to push left-wing themes throughout their second season. What was impressive was how they covered so much in tonight’s episode, "Guns, Pills and Birds," in so little time. Buckle up, folks, this one’s a doozy.

Big-box store Cloud 9 employee Jonah (Ben Feldman) is portrayed as the intelligent, albeit annoying, authority on the show. When his supervisor Amy (America Ferrera) assigns him to work the gun counter, he balks, saying he doesn’t “believe” in guns.

Amy: Gabby is in soft lines, Elias, grocery, Jonah, you're at the gun counter.

Jonah: Oh, uh--oh. [Shudders] Can I switch with somebody? I just--I don't really believe in guns. I mean, I'm just... Kind of against selling them or buying them or owning them.

Dina: You don't have a gun?

Glenn: Without a gun, I do not know how I would stop that raccoon from trying to impregnate my Winnie the Pooh lawn ornament.

A little fact checking here: Jonah is shown picking up (from an unlocked display case) and (mis)handling a 9mm but Wal-Mart, the store Cloud 9 is obviously based on, hasn't sold handguns since 1993. Wal-Mart has strict procedures on gun sales, including background checks on any employee selling or handling guns. In real life Jonah would never be asked to man the gun counter at a big box store, not simply because he doesn't like guns, but also because he knows nothing about them, how to run a background check or complete a legal sale. It wouldn't make sense for Cloud 9 to put its federal firearms license on the line like this. Moving on...

Throughout his time on “Instruments of Death duty” as he calls it, Jonah makes any excuse he can to refuse a gun purchase from every customer who approaches the counter, from a sketchy character who talks to himself to redheads for being “too fiery.” An NRA customer (Kevin Farley) complains of discrimination and enlists other members to rally to his cause, forming an “open carry” protest at Cloud 9.

Dina reassures the employees, “Okay, everybody calm down. It's just an open carry protest. Gun owners are just exercising their second amendment rights. It's all perfectly legal.” At least they got that right, meanwhile they take the time to spoof on gun owners.

NRA Guy: Today is a great day for the second amendment.

NRA Guy: I'm proud to see so many of us came out here to protest the despicable actions of that short-haired lady over there who infringed on our rights today. She can't take us away from our guns.

Jonah: Okay, all right, all right. First of all, I'm a man, but thank you. Second of all, what about my first amendment right, huh? The right to an opinion. I can say whatever I want to say.

Amy: Will everybody please just shut up! You sound like children. Okay? Look. We can't all—

Amy: [Clears throat] We can't all—

Man: Get up high. 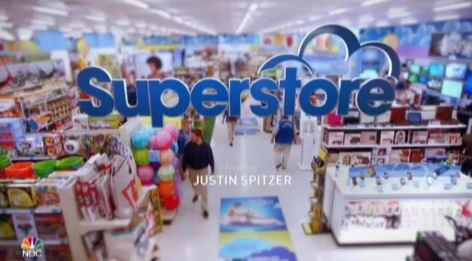 Amy: Look. We can't all just do whatever we want whenever we want to. You don't want to sell guns, it's your job. Be a grown-up. And you! Someone pisses you off so you have to flash a rifle to prove a point? Come on, man. Just be a grown-up. Look. I wanted to spend the weekend eating pizza and watching Freddie Prinze Jr.

Amy: What? I don't think so. No, I'm, like, 70% sure he's alive. Okay, that's beside the point. The point is that I don't get to do that because my husband got tickets to a conference. But I'm an adult. So you don't see me throwing a fit about it.

Man: Isn’t that kind of what you're doing now?

Dina: Nobody hurt the bird!

No responsible gun owner would ever point a loaded weapon at a person near a bird in a store, never mind an entire group of them at an open carry protest as we saw at the end of that last clip! No wonder Hollywood thinks people with guns are so dangerous.

On another note, Glenn finds out the store sells the morning after pill, much to his chagrin.

He speaks with the pharmacist to try and have them removed from the shelf, to no avail. The creepy pharmacist loves the morning after pill because it means he can sleep with more women. Gross!

Glenn: Hey, uh, Tate, is it true we sell the morning-after pill?

Tate: We definitely have the morning-after pill. Yeah, right over there.

Glenn: Listen, Tate, I would never ask you to sell something that you were not comfortable with, so if you wanna remove them from the pharmacy, I will support you.

Tate: Are you kidding? I love the morning-after pill. I have to keep a couple boxes at timeshare in Tampa.

Glenn: Okay, but between us, could you just find a reason to take them off the shelf? You know, um... Maybe say that they're, like, expired?

Tate: That would be a lie.

Glenn: Tate, do you believe in God?

Tate: But I think he lives in nature. You know, the rocks and trees and crap like that. Honestly, I think God could be a frog.

In a last ditch effort to stop the store from selling emergency contraception, Glenn ends up purchasing all the pills in stock without realizing how expensive they are, looking like a fool and going broke in the process.

Glenn: What? That much?

Tate: Yeah. Well, each pill is over 40 bucks. I'd explain why, but your brain couldn't handle the science.

Glenn: No, no, I can't afford that. I mean, well, with car payments and mortgage and groceries for 13, we're barely getting by. I'm gonna have to return these.

Tate: Yeah. That's illegal. You could have tampered with them.

Glenn: But you know I didn't. I was here the whole time.

Glenn, whose "brain couldn't handle science," goes around, betraying his beliefs, awkwardly trying to resell the pills to customers on the side to recoup the costs – the price he paid “plus a small donation to the pro-life coalition” to keep him from going to hell.

If it seems repetitive for conservatives to take hits like this from network TV, that's because it is. They always use a smug liberal, such as Jonah, and a wimpy conservative, such as Glenn, to show their audience which side is right and which is wrong. But it's ok, we all know who will have the last laugh.