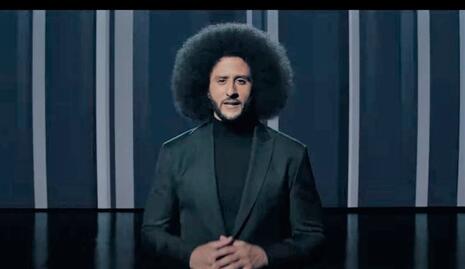 On Monday, Netflix released a trailer for the Colin Kaepernick series that begins Oct. 29. As of this morning, more than two-thirds of the YouTube reactions were thumbs down. In a glimpse of the upcoming series, the trailer for Colin in Black & White features Kaepernick whining about others determining “our” path and preventing “us” from speaking our truth.

The six-episode series will trace Kaepernick’s life as a “black child growing up with a white adopted family and his journey to become a great quarterback while defining his identity,” a producer description reads. Actor Jaden Michael plays the role of the young Kaepernick in the series. Nick Offerman, who called Kaepernick an “American hero,” and Mary-Louise Parker play his parents.

This week’s trailer shows the actor in and around a high school with Kaepernick narrating:

“Life puts us on a path. Sometimes narrow. Sometimes winding. But always ours. When we’re young we’re told that the world is ours, that we should figure out our path and take our shot. Then one day we realize that the path we’re taking is someone else’s. In this game we can’t speak our truth. In this game it feels like the only truth we have is theirs. But we can change the game, write new rules, radiate our joy, take back our power and find our purpose. That’s our path. Believe in your path. And by doing that, we can become who we’re destined to be.”

Who is Kaepernick referring to when he mentions their "truth"?

The video shows a white teacher scoffing at Kaepernick, sporting a corn-row hairdo, as he walks through a school hallway. Another scene shows Kaepernick walking with an admiring black girl, but as he says we can only speak their truth, a white girl replaces her as his companion.

Next Kaepernick takes back the game and finds his power as a quarterback throwing a touchdown pass and celebrating with his teammates.

The trailer makes no reference to Kaepernick’s radical social justice activism and the atrocious behavior that made him an unwanted former NFL quarterback. He definitely wrote his own new rules as he knelt before the national anthem and as he trashed America and referred to public safety officers as “slave patrol.” Kaepernick wrote the script of a polarizing activist.

Netflix isn’t showing any of these turn-off qualities of Kaepernick, though. He’s portrayed merely as a young man, a jock trying to hurdle race, class and culture. Even though he talked and acted his way out of the NFL, his football career made him a millionaire, the toast of the anti-American Left and one of the newest members of the University of Nevada’s Wolfpack Hall of Fame.