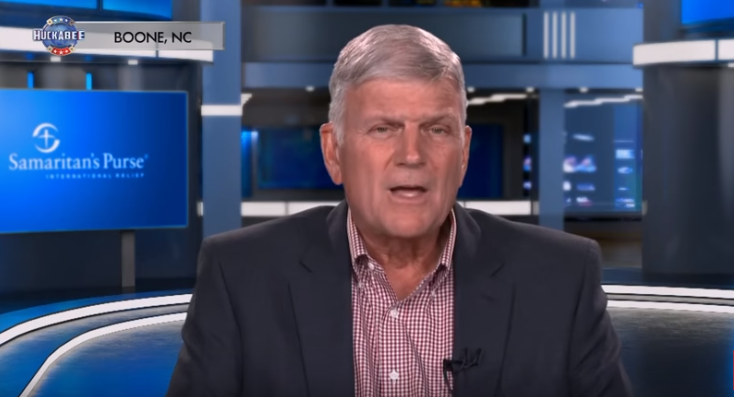 On Wednesday radical progressives smeared Rev. Franklin Graham and his charity’s makeshift coronavirus clinics because the Christian and son of Billy Graham disagrees with homosexual marriage. Yeah how’s that for unifying in times of crisis?

Judah Robinson, a reporter and producer at the notoriously whiny and deluded leftwing outlet “NowThisNews,” tweeted out a photo of Samaritan’s Purse volunteers setting up makeshift tents in New York City to treat overflow patients suffering coronavirus symptoms. Even though this is an objectively good move on the part of the charity non-profit founded by Franklin Graham, Robinson took the opportunity to remind Twitter users that Franklin Graham is a man of hate.

Robinson captioned the photo with, “The makeshift hospital in Central Park is being built and run by Samaritan's Purse, the relief organization run by the notoriously anti-LGBTQ+ minister Franklin Graham.”

Ah ok, well let’s take it down. Who cares how many patients he’s helping. He prefers traditional marriage.

Robinson continued whining. He put out a follow-up tweet, asking, “Has the city simply overlooked the organization's discriminatory history? Or has the city gotten assurances that LGBTQ+ patients won't be turned away and treated with dignity? And if so, how does the city plan to monitor and enforce this?” He then tagged NYC authorities in a serious bid to exclude people he disagrees with from helping victims in the American city hardest hit by the virus.

To clarify, (even though it’s pretty obvious) the “discriminatory history” Robinson is referring to is that Samaritan’s Purse qualifies that its members adhere to traditional Christian values: volunteers who uphold the sanctity of heterosexual marriage. Though they may have those views, they don’t discriminate anyone or have preferences in who they help; gay, straight or one of the other made-up genders.

Here’s another way to look at it: Would a conservative evangelical charity go to the effort and expense of setting up a hospital in New York freakin’ City with the expectation that it could discriminate against gays with impunity?

Robinson’s tweet was so obnoxious that the Daily Wire founder Ben Shapiro hit back with a sarcastic rebuke. “Yes, let's shut down the charity hospital that will be caring for anyone who has covid-19, including LGBT people, because you don't like Franklin Graham.”

Another smarmy lefty -- user “JoeMyGod” -- blew up over Shapiro’s take, tweeting, "Medical volunteers for Samaritan's Purse must sign a mission statement agreeing, in essence, that all LGBT people will burn in hell for eternity.” Yeah, that’s not a cheap caricature by any stretch.

“Jesus is motherfucking love, you guys,” he added, thinking he hit it out of the park. Sadly, it wasn’t the case. Shapiro hit back with another dose of common sense: “I'm sure that lots of Christians aren't exactly pleased with my rejection of Christ as Lord. But I'm not going to reject charity hospitals thanks to our religious disagreements. Get over yourself.”

“MyPillow founder” and CEO Mike Lindell got the same mocking treatment over his invocation of the Bible during a White House coronavirus presser on Monday evening. Even though this is a majority Judeo-Chrisitian nation, major networks like MSNBC mocked him for it. MSNBC pundit Chris Hayes offered it as one of the reasons that they should stop covering the press conferences.

The left can’t hide their hatred of traditional faiths. But we’ll still give them aid and comfort anyways.