Hallmark’s reversal on pulling Zola’s “lesbian” wedding ad sent another shockwave through the media world Sunday night after it had just been whipped up into a frenzy. CBS, ABC and NBC’s Monday morning shows all featured news on the “controversial” redecision, though unsurprisingly they leaned almost exclusively on LGBTQ talking points from the Southern Poverty Law Center (SPLC) and the Gay and Lesbian Alliance Against Defamation (GLAAD.) 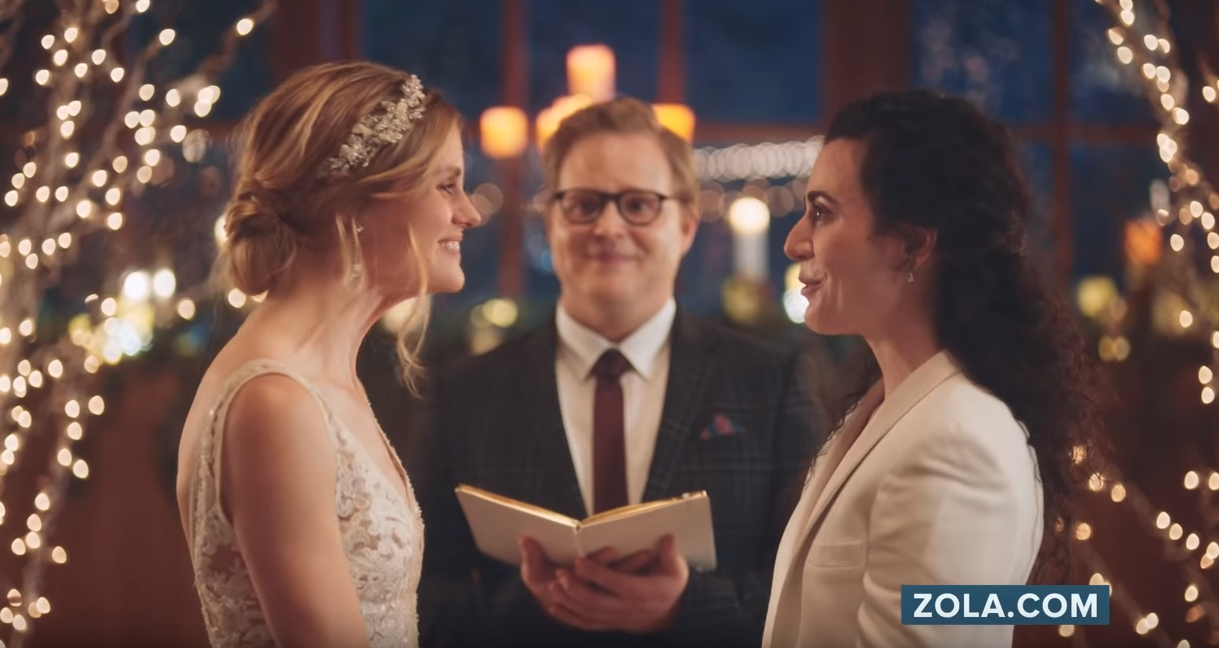 The three major TV networks reported on Hallmark’s initial decision to ban the gay ads as “controversial” and aimed at bashing different types of “love” and featured the opinions of progressive groups like GLAAD, SPLC, and gay celebs like Ellen DeGeneres to back that narrative. Good Morning America anchor Will Reeve characterized it as the channel “trying to unmake its mess.” Hmm, whose side is ABC on?

Reeve’s narrative followed from the premise that the initial pulling of the lesbian ad was the “controversy” rather than Hallmark’s first ever LGBTQ ad which garnered plenty of backlash in its own right. In response to the channel’s statement that removing the ad “was the wrong decision” and desire to “reestablish our partnership and reinstate the commercials,” GMA featured GLAAD President and CEO Sarah Kate Ellis’ response.

Ellis claimed, “This reversal is so important for the LGBTQ community, who two days ago were told [they] weren't worthy of advertisement on the Hallmark Channel.” She added, “The decision to put the ad back on the air is absolutely, one hundred percent, the right one.” Oh, yes, prime ABC real estate for the woman who insists that TV shows need 20% LGBTQ representation by 2025, even though only 4% of the population is LGBTQ. Wouldn’t it seem that her ideas on representation are a little skewed?

NBC’s Today also centered its Hallmark talking points on the rhetoric of progressive special interest group, the infamous Southern Poverty Law Center. The network detailed that one of the conservative groups that initially got Hallmark to pull Zola’s ad, One Million Moms, is a controversial group. After all, it’s part of The American Family Association (AFA,) which is listed as an “Anti-LGBT Hate Group” by the SPLC. Though that isn’t nearly as big a deal as its sounds — well, if you can look past Today’s “HATE GROUP” visual done in all-caps with a foreboding red font.

The SPLC has shown itself to be less of an arbiter of civil rights and more of a “hate-filled, anti-Christian, anti-conservative organization,” better yet, “nothing more than a weapon of the radical Left.” All an “Anti-LGBT Hate Group” would have to be, really, is one that promotes the idea of traditional marriage according to the group. AFA has been listed for “combating the homosexual agenda.”

Today also featured Ellen DeGeneres' dissent prior to Hallmark’s backtrack, featuring her tweet: "Isn’t it almost 2020?.. what are you thinking? Please explain. We’re all ears.” Of course, NBC would have to reinforce their lesbian matriarch’s point of view considering her show's on their network. Though, we wonder who gave the go ahead to spout off, NBC or the powerful talk show host?

CBS's This Morning’s take was equally biased. Reporter Nikki Battiste began the segment with some melodrama: “A commercial meant to show a celebration of love became a center of controversy after Hallmark blocked it from airing on its channel.” Then they brought out the LGBTQ heavy-hitters like Pete Buttigieg and DeGeneres to tell CBS viewers how they ought to see the issue.

CBS featured Buttigieg’s tweet which blasted conservative groups' claims that the ads were not “family-friendly.” “Families are built on love — no matter what they look like,” he wrote, adding, "Being ‘family-friendly’ means honoring love, not censoring difference.” Of course, the nets and Buttigieg are under the false impression that the difference between heterosexual and homosexual relationships is merely superficial, so this entire debacle is touted as a win for human decency. Though we know it’s just another media-sanctioned rebuke against conservatives.

Battiste ended the segment saying the whole thing reminded her of a quote from a Holocaust survivor from the Pittsburgh synagogue shooting who said, "Love is easier than hate."