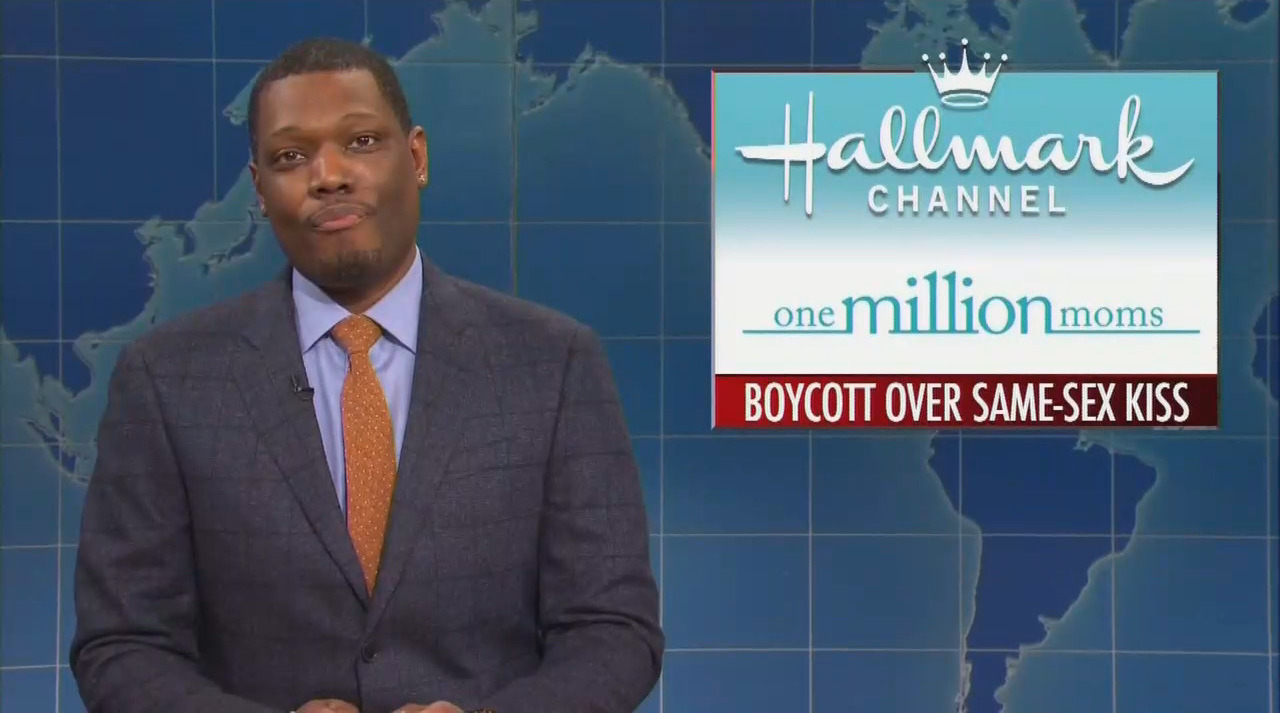 NBC's Saturday Night Live went after a conservative family group for objecting to a lesbian ad on the Hallmark Channel during the sketch comedy show’s December 14 episode hosted by actress Scarlett Johansson.

Zola, a wedding planning website company, was running 6 commercials on the Hallmark Channel during their popular Christmas season, four of which included gay couples, one of which solely focused on a gay wedding and featured a lesbian kiss.

The American Family Association’s One Million Moms drew attention to the commercials with a petition asking Crown Media Family Networks, owner of the Hallmark Channel, to stop airing LGBTQ ads and to never air LGBTQ-themed Christmas movies. Crown Media responded by cutting the ads, explaining, “The debate surrounding these commercials on all sides was distracting from the purpose of our network, which is to provide entertainment value." (Hallmark reversed itself, see update at bottom of post.)

One Million Moms says no further action is needed on this particular issue after the Crown Media CEO personally responded and “reported the advertisement aired in error” while confirming “the Hallmark Channel will continue to be a safe and family friendly network.”

Of course, the preservation of sexual morality got liberals up in arms.

During the “Weekend Update” segment, co-anchor Michael Che brought up the issue, apparently not knowing it had been resolved.

There also was an SNL skit spoofing on the Hallmark Channel’s cookie cutter Christmas movies that ended with cast member Aidy Bryant, saying, “I’m Emily Kringle for Hallmark, reminding you to stay straight out there.”

GLAAD issued a statement to The Hollywood Reporter calling Hallmark’s decision to remove the LGBTQ commercials “discriminatory and especially hypocritical coming from a network that claims to present family programming and also recently stated they are ‘open’ to LGBTQ holiday movies.” In the statement, GLAAD claimed, “LGBTQ families are part of family programming” and accused the protesters of being “fringe anti-LGBTQ activist groups, which solely exist to harm LGBTQ families."

Zola’s Chief Marketing Officer Mike Chi objected to Hallmark approving ads that showed heterosexual couples kissing but not homosexual couples and said, “All kisses, couples and marriages are equal celebrations of love and we will no longer be advertising on Hallmark."

Meanwhile, before the ad controversy, LifeSiteNews started a petition that’s nearing 50,000 signatures telling Hallmark to say no to LGBTQ Christmas movies after Crown Media executives indicated they’d be open to them in the future.

Hallmark Christmas movies are known for their feel-good atmosphere, and are generally movies which can be enjoyed by the whole family -- without having to explain sexual practices which offend against one's faith.

This petition asks Hallmark to keep it that way, and keep sex and sexual practices - including the promotion of homosexuality, transgenderism, etc. - out of their movies.

The Hallmark Channel is safe, for now. But Christians and conservatives need to hold their feet to the fire so they stand firm while the left launches their own boycotts and attacks. We don't want the Hallmark Channel to turn into another Chick-fil-A.

UPDATE: Hallmark folded already and CNN had on a GLAAD spokeswoman to condemn One Million Moms as "a known fringe hate group."