Jill Filipovic: Dear Pro-Life Men, Please Cut a ‘Half Inch' Off Your Penis

For the media, particularly its rabid feminist cohort, Alabama’s near-total abortion ban on May 15 is a major step towards the death of democracy. In the eyes of New York Times feminist columnists like Jill Filipovic, forcing a woman to complete their pregnancy is a painful imposition, one that should require equal payment on the part of men: that is, having “a half inch cut off from your penis with every [pregnancy.]” 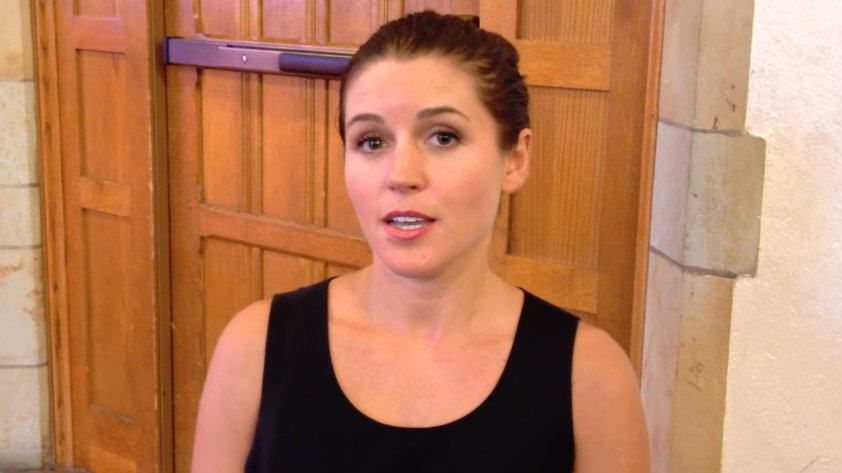 Got that? The awesome power and gift to bring a new life into the world is really just the equivalent of castration, and men should pay this barbaric pregnancy tax of sorts.

Filipovic is prone to hysteria. New York Times columnist and author the The H Spot: The Feminist Pursuit of Happiness, once asked American women to “divorce [their] Republican husbands” during the Kavanaugh debacle.

She’s not what you might call a caring nurturer in the classic feminine mode. She tweeted, “Honestly what if we just forced a quarter of men to be incontinent with every pregnancy they created? Fractured a third of their pubic bones for every child? That would be unconscionable. It’s also what pregnancy means for women.” Screechy outrage is coin of the feminist realm, but her low opinion of childbirth reaches the depth of farce.

“Pregnancy and childbirth cause serious and permanent changes to many women’s bodies. Require that a quarter inch be cut off his penis for every pregnancy he creates and see how quick we are to force women to indelibly risk and chance their bodies.” 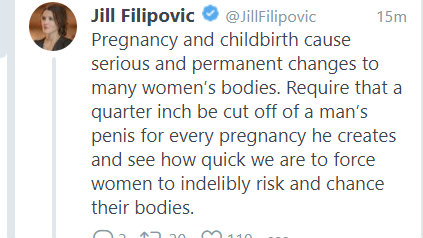 She summed it up in a shorter subsequent tweet, saying, “Here is the prochoice prolife compromise: You can vote for abortion restrictions in return for half an inch cut off your penis with each one.”

This is the school of feminism that suggests children in the womb are cancerous parasites, and all that matters is whatever harm or inconvenience is caused to the woman. Its life is of no consequence.

Filipovic refuses to understand the pro-life fight is about saving lives and not about female control. Thus it’s impossible to have an honest conversation about abortion rather than some entitled kvetching about pro-lifers and their impositions. It’s a life, dammit. Also, you don’t live in Alabama. If you want us to stay out of your body, then stay out of their politics.