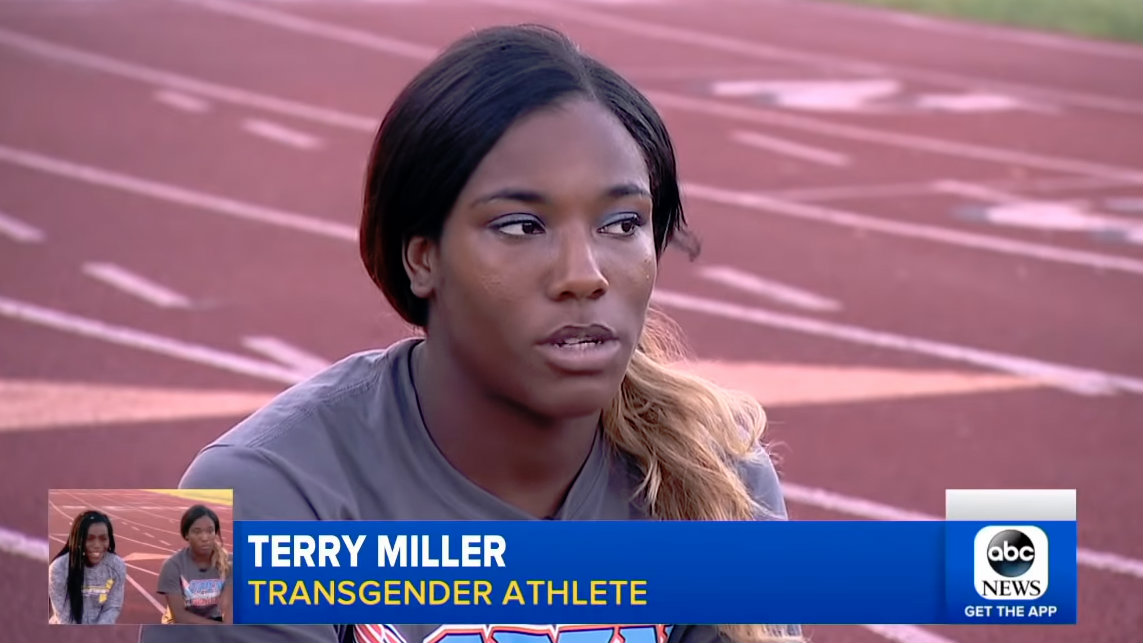 Ever since ESPN awarded Bruce for being confused enough to become Caitlyn, radical LGBTQ members and their media friends have moved to squash criticism that praising gender reassignment is wrong. Of course, trans activists started with demands that they not have to endure “hate,” but it’s quickly become a demand that society celebrates their delusion.

The current trans athlete debate has uncovered this insanity, with activists insisting that men who “become” women (or vice versa) be allowed to participate in traditional athletic competitions among peers of their new gender. Any sensible backlash against trans women seeking to compete in women’s sports, for example, has been categorized as hate speech, even “Nazi-ism.” And of course major groups, like the International Olympics Committee, have bowed to this alt-left bullying, regardless if acquiescing flies in the face of biology

One of the first high-profile clues that trans had become progressives' dysfunction-of-the-month involved Mackenzie “Mack” Beggs, a female high school wrestler who sought to compete in boys’ competition as she was taking male hormones in efforts to transition. The normal adults running her Euless, Texas division insisted that she remain in the female field. Of course this stirred up an intense media debate. Lefty outlets howled at the injustice. Mack was a male because he said he was, and how dare the league refuse to bend reality to accommodate him.

Critics, including wrestling opponents, argued that Mack had a huge advantage in the female competition because of the steroids. Beggs’s record stood at 92-0 at the end of two wrestling seasons. The Dallas Morning News lamented that the community still wasn’t enlightened enough to pretend that was okay: “But if Euless Trinity transgender wrestler Beggs thought his Class 6A 110-pound girls title victory on Saturday would be more universally understood, respected and embraced than last year's, he was in for disappointment.” It also mentioned the “boos” and hate Mack stood against after victory. “He responded by repeatedly tapping his chest.” Sounds like toxic masculinity.

But in today’s PC mire, noticing the emperor has no clothes is inviting controversy. Just ask tennis legend and gay rights activist Martina Navratilova. She made the mistake of coming down on the wrong side of the issue after a trans cyclist (biologically male) was featured in a BBC article detailing the hate she endured after winning the women’s cycling World Masters.

Navratilova, who knows a thing or two about competitive sporting, tweeted that this “Can’t be right. You can’t just proclaim yourself a female and be able to compete against women. There must be some standards.” 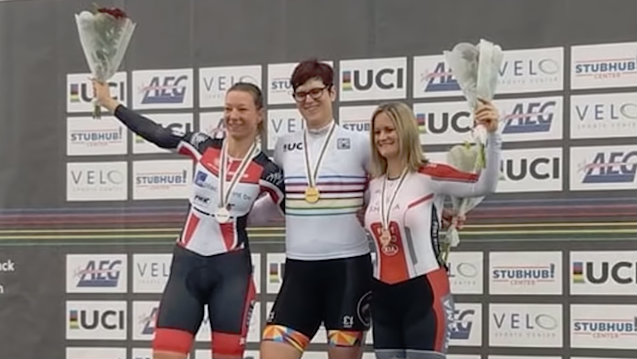 The resulting outrage was predictable to everyone but, it seemed, Martina. She clarified her comments in a February Sunday Times Op-ed, saying, “Letting men compete as women simply if they change their name and take hormones is unfair.” In fact, she said, it amounts to “cheating.”

Navratilova argued that “Simply reducing hormone levels – the prescription most sports have adopted – does not solve the problem… A man builds up muscle and bone density, as well as a greater number of oxygen-carrying red blood cells, from childhood.”

That’s when the steroids hit the fan. Martina was called “transphobic” by activist group Trans Actual, and was removed from her position as athlete ambassador for gay sports group Athlete Ally.

Still, the media war on one of LGBT athletes’ greatest advocates intensified. Several progressive outlets affirmed that it was “science” that trans people have no advantage when it comes to sports competition, and decried Navratilova and like-minded critics as haters. The Nation’s Dave Zirin stated, “The reality is that there is no scientific data showing that trans women are more likely to be successful in women’s sports,” while OutSports writer Dawn Ennis went all the way:

The Nazis had 'The Jewish Question,' and history records the horror which its leaders called the 'Final Solution.' Navratilova treads a very dangerous line in asking if this issue of inclusion should be called a name that’s not so far off from Joseph Goebbels’ nomenclature.

Ironically, the condemnation of Martina came right after a recent high profile case involving two Connecticut HS trans girls dominating their women’s track division. Both former men won first and second place respectively, and Good Morning America had a segment on how they have been “under fire” from critics. For the media mob, these trans victories should be celebrated, and critics are guilty of spreading “vitriol.”

The New York Daily News’ David Cray tried to make it seem like some bigoted double standard, saying, “As long as trans people are losing and are not the best, everything is OK. As soon as they start winning, that's when the vitriol comes out about how they're really still a man.” Yeah, cuz they’re still men.

But that’s not slowing the sprint down the rabbit hole. The trans track stars’ hometown conference, the Connecticut Interscholastic Athletic Conference, states that “students are allowed to participate on a team based on their gender identity.” The NCAA says that trans women may compete in female competition as long as they’ve completed one year of “testosterone suppression.” The International Olympic Committee also in 2016 decided to allow for trans athletes to compete as they identify, just as long as they too meet a testosterone requirement.

So yeah, these athletic boards claim to be able to adjust for chemical discrepancies, but then even GMA asserted “medical research cannot identify the line where a competitive advantage might exist for trans athletes.” And here we thought they had decided it was science. 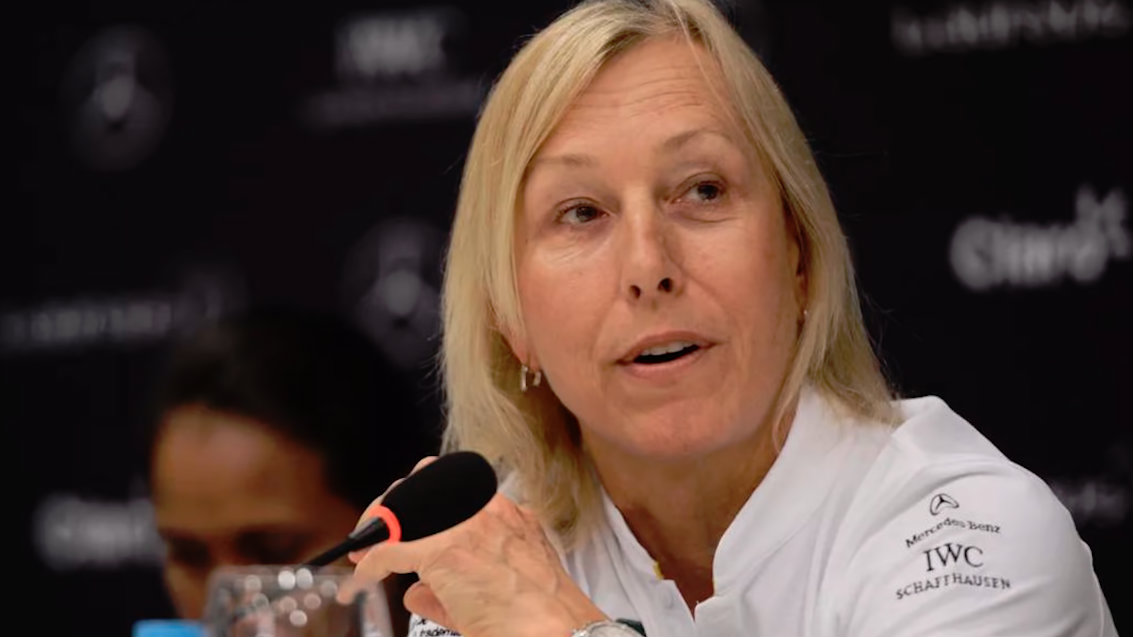 At the very least, this demonstrates that a debate between activists and people like Navratilova, or famous long-distance runner Paula Radcliffe might be necessary. But again with the media’s help, the rabid activists are getting away with shutting down the discussion. For example, in March 2018 CNN hosted Navratilova so she could rail against the “shocking” gender pay gap between her and other tennis star John McEnroe.

Well when you’re on the progressive side of the argument, they’ll hear you out. But since she has made her recent controversial comments at the expense of the current alt-left mentality, she has not yet been given the CNN platform to weigh in or defend herself. She merely received coverage in a CNN.com article about her apology for “transphobic” language. On top of everything else, it just goes to show that the liberal media is reinforcing that going against the mob is crazy, and potentially career suicide.