The Mr. & Mrs. Mike Pence hate train has been receiving quite a few guests onboard in the last week, what with Huffington Post and several CNN anchors insisting that the Second Lady is a homophobic bigot for working at a devout Christian school. Now that VP Mike Pence has come to her defense, more lefties are calling him an “extremist” who exists in the same camp as actual hate-peddlers like Louis Farrakhan and the Ku Klux Klan. 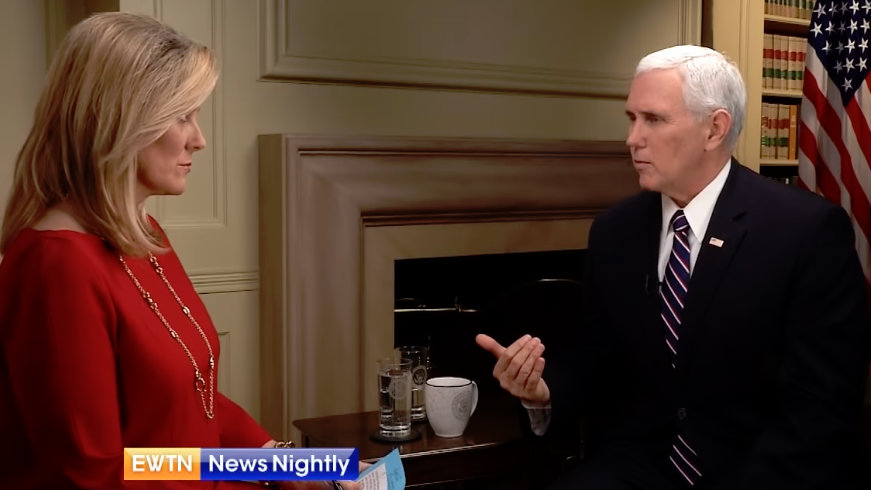 Kevin Baron, Pentagon reporter and executive editor of Atlantic Media site Defense One continued the anti-Pence fever on Friday afternoon with a series of tweets blasting Mike Pence and his wife as religious “extremists” existing on the “fringes” of society. Baron trashed Pence’s statements from an interview with EWTN reporter Lauren Ashburn, during which he defended his wife and his Christian faith, which have come under another wave of nasty lefty insults.

Pence told Ashburn, “To see major news organizations attacking Christian education is deeply offensive to us. I mean we have a rich tradition in America of Christian education, and frankly religious education broadly defined. We celebrate it. The freedom of religion is enshrined in the constitution.”

Concerning the “Islam” comment, Baron was referring to a 2017 statement of Pence’s, in which the Vice President praised Indonesian Islam for its efforts to promote “peace” and a more “unified” nation. One can presume that Baron’s observation of a double standard involves seeing Pence praise a version Islam that doesn’t maim ideological dissenters, while worshipping a God Who teaches that homosexuality is not a natural lifestyle.

Clearly there’s an appropriate distinction here on Pence’s part, but for lefty ideologues like Baron, not celebrating homosexual acts is tantamount to throwing homosexuals off of parapets, etc. It’s this kind of unwieldy logic that’s tearing America’s social fabric apart, but such is a small price to pay in order to be able to throw playground insults at your political enemies.

Still, Baron wasn’t finished. Instead of just pointing out some fallacy on the Pence’s part, the reporter couldn’t resist stooping low in order to equate the vice president and his wife (and Jerry Fallwell Jr., for good measure) with some of the lowest dregs of society He tweeted:

“So, America is great because even extremists like the KKK and Fallwell [sic] and Farrakhan get to exist on the fringes, as long as they don't hurt anyone. And the rest of us are free to decide whether to adopt their preachings or keep them on fringe, where VP and SLOTUS Pence live”.

Real nice. Christians thrown in with murderers, liars, and thieves. It’s one thing to disagree with the Christian stance on sexuality — that’s expected if you want to work in media — but to equate a man who values biblical traditions including forgiveness of enemies and love for the sinner, with one who calls his enemies “satanic” and “termites” to be eradicated, is a whole new hate ballpark. Maybe Baron should start wondering where he stands next to Farrakhan.