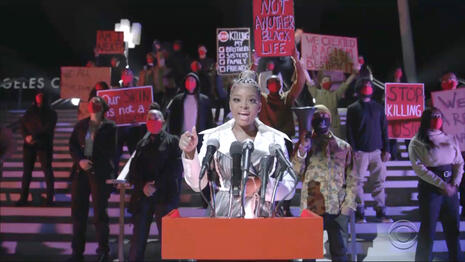 Among many other acts, Sunday night's Grammy Awards showcased an anarchistic anti-police performance by rapper Lil Baby. His song began with a voice over from a communist playwright who believed anti-communism was a form of white supremacy. It also included a speech from a Farrakhan-loving anti-Semite who was too radical even for the Women's March.

Before Lil Baby's protest song, "The Bigger Picture," written in June after George Floyd's death, began a black man was shown sitting in a car as police approach. The audience hears a speech given by black American playwright and committed communist James Baldwin at Cambridge University in 1965.

"When I was growing up I was taught in American history books that Africa had no history and neither did I. That I was a savage. About whom the less said, the better. Who had been saved by Europe and brought to America. And, of course, I believed it. I didn't have much choice," Baldwin says.

Baldwin believed that being anti-communist was in and of itself a kind of racism. In this, he would fit in well with the current Black Lives Matter movement. As the man sits in the car, sinister white cops approach, take out their guns, grab and throw him to the ground for no reason.

The performance then becomes a homage to the chaos and destruction of BLM protests this summer as Lil Baby sings, "I gave 'em chance and chance and chance again. I even done told them please I find it crazy the police'll shoot you and know that you dead  but still tell you to freeze -- up. I seen what I seen. I guess that mean hold him down if he say he can't breathe."

Then the camera hones in on radical activist Tamika Mallory. She gives a speech to the audience calling on President Biden to take action.

You could certainly call it “a hell of a year” with billions in damage, many dozens of innocent lives killed by rioters, small businesses and communities destroyed, and livelihoods ruined. Mallory seems proud of this. Her use of “accomplices” instead of “allies” certainly sounds malignant.

Jewish groups condemned the Grammys for including Mallory, the anti-Semitic former Women's March co-chair who referred to Louis Farrakhan as the “G.O.A.T [greatest of all time]”, in their program. After leaving the Women’s March board in 2019, Mallory and other noted anti-Semite Linda Sarsour went on to found the social justice organization Until Freedom which has been especially active in the Black Lives Matter movement. Last year, Mallory trashed Daniel Cameron, the black Republican Kentucky Attorney General who oversaw the Breonna Taylor case, as “no different than the sellout negroes that sold our people into slavery.”

Americans of all races are accustomed at this point to entertainment oligarchs trashing our nation and insulting our most important values. The majority of Americans, including the majority of black Americans, are against defunding the police in their communities. We are tired of law enforcement being universally vilified by communist sympathizers who want to tear apart our country. No Grammy performance will change that.