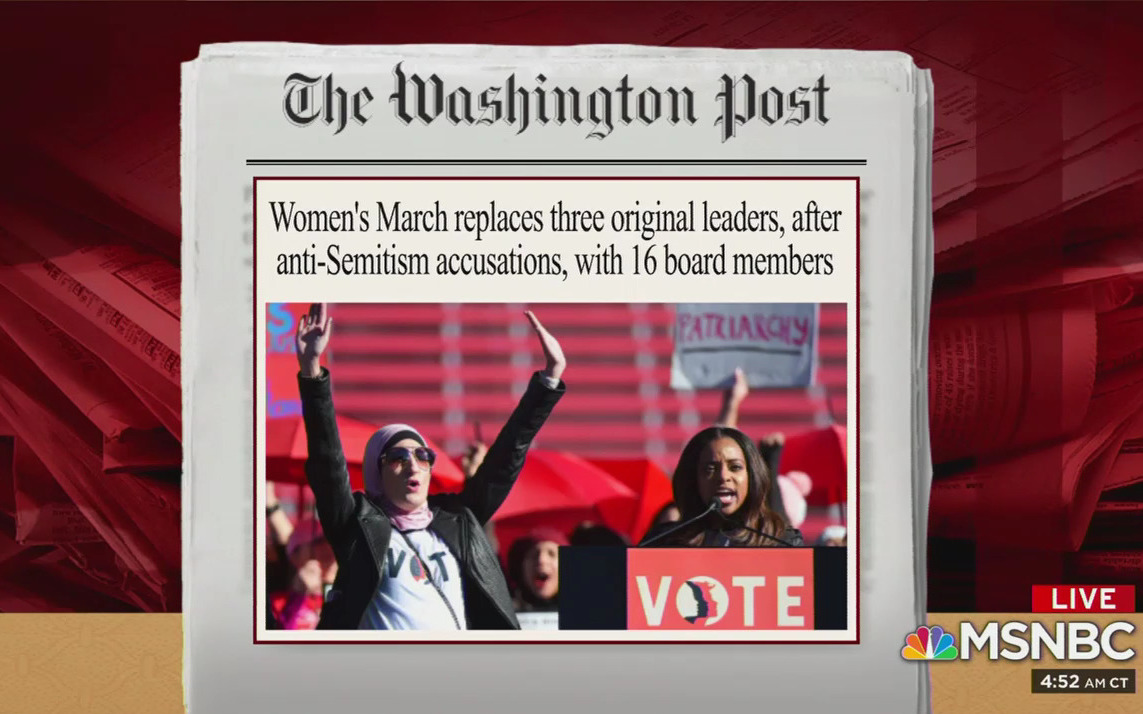 On Monday, it was reported that inaugural Women’s March co-chairs Bob Bland, Tamika Mallory and Linda Sarsour were being replaced with 16 new board members. The Washington Post had the scoop, and its headline announcing “Women’s March cutting ties with three original board members accused of anti-Semitism” made it sound like the radical left-wing group was finally taking a stand against anti-Semitism within its leadership, but that couldn’t be further from the truth.

“Much of the controversy stems from an incident when Mallory attended a Nation of Islam event at which black nationalist Louis Farrakhan made incendiary remarks about Jews,” wrote Marissa J. Lang of The Washington Post. “The march’s leadership tried to quell the outrage, reaching out to the Jewish community and denouncing anti-Semitism, but leaders stopped short of denouncing Farrakhan, who is known for making virulently anti-Semitic remarks.” Wow, way to dodge the many other examples of these women’s radical, bigoted and anti-Semitic words!

Radical Islamist Sarsour, currently a campaign surrogate for Bernie Sanders, herself provided the first clue that the org wasn’t just ridding itself of its hateful past with the announcement of new board members. Warning against believing “clickbait headlines," she tweeted how “excited” she was that this “AMAZING group of women stepped up, most of whom I worked w/ YEARS before.”

Zahra Billoo, executive director of the San Francisco chapter of the Council on American-Islamic Relations, told the American Muslims for Palestine (AMP) conference in 2018, “I am clear about I am not going to legitimize a country that I don't believe has a right to exist. And that's where I am."

In a Facebook status update last November, Billoo wrote she "was revisiting this over the weekend and hasn't changed or waivered one bit: the Israeli Defense Forces, or IDF, are no better than ISIS. They are both genocidal terrorist organizations."

Billoo has many, many outrageous Tweets, some of the worst include, "I'm more afraid of racist Zionists who support Apartheid Israel than of the mentally ill young people the #FBI recruits to join ISIS. #CVE" and "Blaming Hamas for firing rockets at [Apartheid] Israel is like blaming a woman for punching her rapist. #FreePalestine v @KathlynGadd."

Another new board member, “black, queer feminist” Charlene Carruthers, is a big BDS and Farrakhan fan who’s also tweeted, "Jerusalem should not be listed as being in Israel" and advocated for "#FreeCommunityCollege education for all who want it in America” because “We send billions to Israel to fund apartheid. #FreePalestine #DDPalestine."

A third member of the board, Samia Assed, is a Palestinian activist who supports BDS and has posted pictures of herself with Sarsour and Rep. Rashida Tlaib.

This is what just a few hours on social media turned up on some of the new board members’ links to anti-Semitism, I’m sure there will be a lot more outrageous material on the rest of these radical left-wing feminists to come.