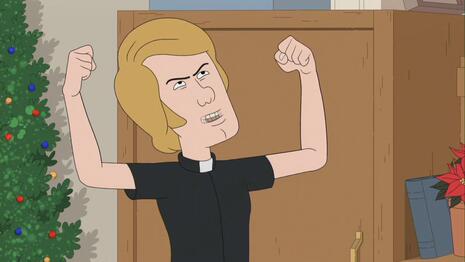 Just in time for the holidays, Netflix released the fifth and final season of the vile animated “comedy” F is for Family on November 25 and, sadly, the show is still as unfunny and disturbing as ever. In addition to the usual Catholic-bashing, foul language, and sexualization of children, the show added new subjects such as the occult and woke, anti-cop sentiment.

Attacking the Catholic Church has been a favorite of the series since its beginning, and season five was no different. Maureen, who is no longer the baby of the Murphy family the show centers around, delves into the occult and starts practicing sorcery and rituals. In episode six, Screw Ups, Sue becomes fed up with Maureen’s dark side and brings her to Father Pat to discuss her “dangerous obsession with spookiness and the occult.”

As Father Pat speaks to Maureen, the discussion turns to the body and blood of Jesus in Holy Communion, which confuses Maureen. Altar boy Jimmy responds, "It's not supposed to make sense. It's religion!"

Father Pat: ♪ Hey! His name is Jesus ♪ ♪ And when we sneezus ♪ ♪ We say God bless you ♪ ♪ So the devil won't get you ♪ Now, The Beatles said they were bigger than Jesus, and so God punished them with Yoko Ono. ♪ Hey! This God Will drown you in the sea! ♪ Everybody!

Sue: Thanks for taking the time with Maureen.

Father Pat: There is nothing I love more than talking about our Lord with young people. That and fried calamari. Oh, but only the rings. Not those wiggly parts.

Father Pat: Now, Maureen. I was very upset when your mom told me what you did at the cemetery last night. Witchcraft is a sin, and witches are evil. God tells us that by putting warts on their noses and cursing them with the power of flight. You understand?

Father Pat: This is the Christmas season. Your thoughts should be of the Baby Jesus, who came to Earth to save us from sin by dying on the cross.

Maureen: So, um, Christmas is about death?

Father Pat: No, that's Easter. Actually, that's about torture and murder, which is why we add the bunny and the chocolate eggs. It takes the edge off. And we remember Jesus's sacrifice on the cross by consuming his body and blood in Holy Communion.

Father Pat: Oh, that's just wine that we get at a discount. It's not really blood.

Usher: At every mass, you say it's the blood of Christ!

Jimmy: It's a metaphor, numb nuts! Wine becomes the blood of Christ through transubstantiation!

Jimmy: It's not supposed to make sense. It's religion! You have to trust what the priest says! Like when Father Brown told me he was just adjusting my robes every Sunday.

Father Pat: Uh, Father Brown has been transferred to Albuquerque. We felt, in a less populated state, it might help curb some of his cravings.

As the discussion continues, the writers felt it would be funny to mock the mystery of the Holy Trinity as we near the celebration of Jesus’s birth. (At least they didn’t proclaim, “Fuck all three of You,” as they did last season.)

Jimmy: No! Jesus's mom was Virgin Mary. Mary Magdalene could get dicked down whenever she wanted. Right, Father?

Father Pat: Well, minus the salty language, yes. But the Immaculate Conception is about Mary being born without sin, not conceiving Jesus through the Holy Spirit while remaining a virgin.

Usher: Well, where in the Sam hill does it say that?

Jimmy: Oh, it's simple! God is the Father of us all. So, He's Mary's Father, and He's also the Father of Jesus. And Jesus is part of the Holy Trinity, which means that He's God and God's Son!

Usher: So, Jesus had sex with Himself?

Father Pat: It is not Chinatown. It is beautiful! Pull your dress down! The important thing is, however it happened, Jesus was born our Savior on Christmas Day.

Maureen: I read that he was actually born in April.

Father Pat: You shut your mouth!

Jimmy: He was not!

Maureen: I didn't even want to come here! My mom made me! And I just thought, if I could talk to my grandpa's ghost, my daddy would be happy, and I wouldn't have to be co-princess anymore. I don't want to be Marty Allen!

Usher: There, there. Neither does Marty Allen.

Father Pat: Oh, I'll tell you what happened. The Catholic Church, as always, is being raked over the coals for hypocrisy. And yet, no one questions the moon landing 'cause it was Jack's dream and it was Camelot. And meanwhile, that weak-backed bastard was banging every whore he could find in the fucking pool, and nobody questions that! Oh, who gives a shit? I'm going for a walk.

In episode seven, A Very Merry F***ing Christmas, there’s a final dig at the Virgin Mary as one character describes Christmas Eve as “the night before our Lord and Savior shot out of His holy Mother’s cooch!”

Anti-cop sentiment started in episode one, The Mahogany Fortress, as police were referred to as “pigs.” We also learn that Bill Murphy is in the junior police cadet program with his friend Philip Bonfiglio and altar boy Jimmy. Jimmy announces, “I'm gonna be a cop and priest, that way I can fuck up all the shit I want and then forgive myself. They'll call me Officer Father Mother Fucker.”

But, by episode five, The Searchers, after witnessing the police abusing their power, Jimmy changes his mind and exclaims, “You know what? Fuck being a priest. I’m just gonna be a cop now. If Saint Peter won’t let me into Heaven, I’ll just plant some cocaine on him.”

There were also racial issues presented, as black vending truck driver Smokey complains, “A cop put a gun to my head and said he was gonna send me straight to hell if I didn’t give him a box of Zagnuts.”

In episode seven, Bill decides he doesn’t want to be an officer anymore after witnessing two white cops treating a respected black member of the community unfairly during a traffic stop and hearing one proclaim, “That’s how you make captain.”

F is for Foul Language

Foul language is rampant throughout the entire season, and the vilest language is uttered by the children, as per usual. Jimmy’s younger sister Bridget has always had a foul mouth, and this season she delivers lines such as, “The only thing that’s gonna pop around here is your cherry, future slut.” And, “I’m gonna kick you in the box so hard, you’ll never have a baby.”

The writers further sexualized children with sight gags. In episode four, Thank You So Much, families with young children stand on the sidewalk as a Thanksgiving parade goes by. A well-endowed donkey float passes and the shadow of its penis falls across the faces of children in the crowd as the emcee remarks how large it is. A vandalized vendor truck also passes with a picture of a little boy enjoying a popsicle with graffiti of a penis ejaculating into the boy’s mouth and female breasts drawn onto his chest.

In episode five, The Searchers, Bill and Philip invite friends over to see one of two cartoon films the police allowed them to choose from a box marked “Inadmissible” in the locked evidence cage. However, one of the reels ends up being a pornographic movie, which they accidentally show to their friends:

Employee: Here you go, Mr. Teetson. Several weeks in the making, rescued from an unconstitutional police raid. But now, in your hands.

Employee #2: Break out the lube and grease up your tube. We proudly present Fuck School.

Employee #2: If this is a cartoon, where the hell is Fuck School?

Woman: Officer Screwell, there must be some way for me to make up being late to school.

Employee #2: You need an insertion of discipline.

Frank: What the fuck is this?

Kid: Your daddy’s got an uncut hog on his face.

I don’t know about you, but if I were a comedy writer, I wouldn’t be able to find any humor in using young children as the butt of sexual jokes and crude, pornographic humor.

F is for Farewell!

Thankfully, this is the last time F is for Family will be disgracing screens with its vile, bigoted, and warped “humor,” as the show has finally been cancelled! To that news, we say “F” is for “fabulous!”