Netflix Cartoon to Holy Trinity: 'F*** All Three of You' 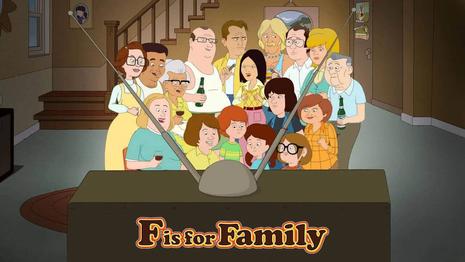 F is for foul, filthy, fetid… any of those words would be more apt of a title for Netflix’s ongoing, self-proclaimed “raunchy” adult cartoon F is for Family which is set in Ryetown, PA, during the year 1974. Even “familiar” would work, since the show keeps repeating the same, tired attacks on Christians and Christianity for shock value. Add in the immature crude “humor,” extremely foul language in literally almost every sentence, and the protests and petitions calling for its cancellation, especially after the third season went too far even for seasoned fans in its depiction of cartoon child pornography, the real shocker is that the show is actually back for a fourth season.

Season 4 debuted on Netflix on June 12, and the attacks on religion start immediately in episode one, “Father Confessor.” Inside Our Lady of Perpetual Suffering Catholic Church, Father Pat hears bizarre confessions from the show’s characters one by one, such as, “I received the sacrament of oral sex, but I passed out before I could reciprocate.” As the priest closes the confessional, he looks at a crucifix and says, “At least you got to die at the end of your shift."

The central plot point of this season is that main character Frank Murphy has to deal with his father showing back up in his life, thus Frank goes to the confessional to vent his thoughts and frustrations to Father Pat. But when the priest tells Frank the confessional is closed, Frank goes into a rage, demanding that his “confession” be heard, yelling,  “…you are gonna sit there, listen to what I have to say, clean it up a little bit, break the news to Him, and tell Him to get off His fat cloud and give this guy a win!”

When Frank gets home, he takes his rage out on a punching bag and then utters the most offensive line of the season which was directed at the Holy Trinity:

Frank: “Goddamn son of a bitch. Coming here making my kids happy. ‘Oh, talk to God!’ Oh, what a laugh! Just sits there with His Son and the fucking Holy Ghost, thinking He’s better than me! It’s Frank Murphy calling! Why’d you bring that fucker back to me? I demand an answer! Aw, fuck all three of you!”

In episode ten, “Baby, Baby, Baby,” just as Frank admits that Father Pat was right when he said, “The only way to peace is through forgiveness,” we see Father Pat in his priestly garb driving next to Frank’s father who is swerving all over the road because he’s drunk. Father Pat yells at Frank’s father, “Watch the road, you ditzy twat,” as he gives him the finger, a very obvious, “the priest is a hypocrite” trope.

Even the coach for the kids’ hockey team joins in the blasphemy, praying with his team, “Lord, look over Your team, especially Your anointed rat Bill Murphy. May he, with Your holy guidance, shove a stick up the other team’s ass and break it off. In Your fucking name, Amen.”

Ironically, even though the show was created before the current racial tensions and protests, there were racial storylines related to the police. Episode 7, “R is for Rosie,” was completely dedicated to Rosie, the show’s main black character. The opening montage features Rosie flying through the air instead of Frank, and a police helicopter hovers over Rosie as an officer shouts on a bullhorn, “This is the police! Pull over!” The helicopter then crashes into Rosie, sending him reeling to the ground.

Another dig at the police comes in episode 10 when Rosie urges Frank to hurry to the hospital because his wife Sue is in labor. “And don’t worry if you get stopped by the police,” Rosie tells him. “You’re white!”

While most of the racism depicted in the show is towards people of color, there was an instance of racism towards whites in episode 7 when Rosie’s friend asks him how his first week as an alderman in “cracker land” went. No matter who the racism is directed at, it shouldn't be fodder for comedy. Especially in these current, troubling times.

I hate to give this disgusting show any credit, but there was a major improvement in this season compared to the last. Maybe the writers took heed of our last story pointing out the dangers of sexualizing children and depicting them in sexual acts, because thank God there was none of that pedophile-baiting this time around.

Overall, this show still gets an “F is for Failure.” Let’s all pray to the God the show loves to blasphemy that it won’t be back for yet another disturbing season.