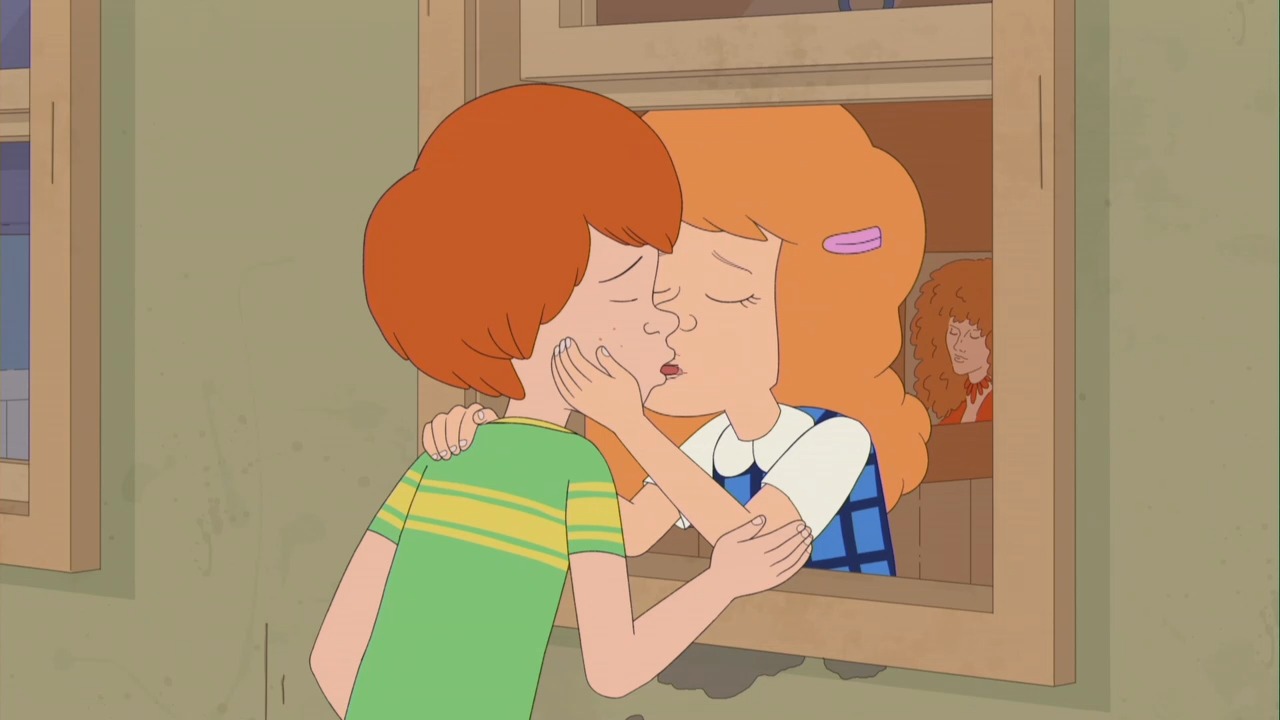 F is for Family is created by Michael Price (The Simpsons) and comedian Bill Burr and is produced by actors Vince Vaughn and Peter Billingsley (Ralphie in A Christmas Story). Based on the life of Burr, who voices main character Frank Murphy, the show is set around the Murphy family in the '70s and pokes fun at some of the less wonderful traits of the decade, such as family dysfunction and fighting, fathers verbally abusing their children for sport, sexism, racism, drugs, alcohol and rampant swearing.

As a child of the ‘70s, I was able to relate to a lot of the show last season, but the offensive attacks on Christianity throughout left a sour taste in my mouth. But this season? If this is supposed to be based on Bill Burr’s life, one must wonder just how twisted his life must be. There were still plenty of crude attacks on God, Jesus, and Christians, but the addition of the vile sexualization of children turned this from a show that I’d prefer wasn’t around to one that absolutely must be cancelled and permanently removed from Netflix for the safety and protection of young minors.

Anthony moans the names of the only children to ever win on the show, “Wayne and Wanda,” over and over while lying on the floor with his hands down his pants, pleasuring himself as gross sound effects can be heard, and he continues chanting their names as he humps the television stand while the show plays.

(Warning: The following content is extremely disturbing and graphic in nature. While we don’t condone this scene being shown on Netflix, we feel it important to share it here to show exactly how vile these scenes are and why it’s imperative they be called out.) 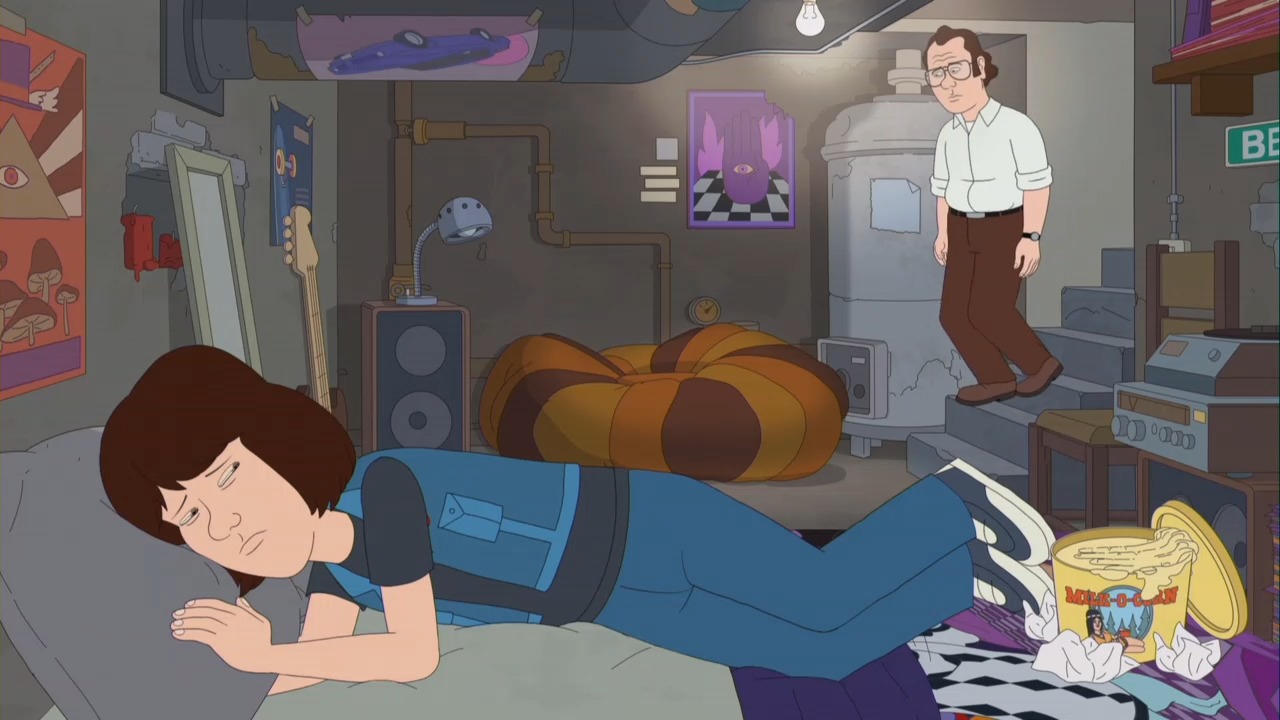 Episode three, “The Stinger,” is named for an erection Frank’s youngest son Bill (Haley Reinhart), who is believed to be around 11 or 12-years-old, experiences in a pool as he stares at his love interest, Bridget Fitzsimmons (Debi Derryberry), as she dries herself off with a towel.

Bridget usually seems innocent with her Catholic school uniform, braces, and lisp. But she is a foul-mouthed child who hates her father, which was apparent as she defied him when he ordered her to leave the pool before the “stinger” incident. When she refuses to listen, her father yells across the pool, “Well then, fuck your mother. And fuck you, too.” When the crowd gasps in shock, he tells them, “It’s alright, everyone. She’s my daughter.” We also learn in episode nine, “Frank the Father,” that Mr. Fitzsimmons told Bridget he doesn’t want her “spreading (her) thighs ‘til (she’s) at least old enough to wait tables.”

When Bill finds himself aroused by Bridget toweling off in her bathing suit, a storm quickly approaches, and everyone exits the pool. But as Bill looks down at his “stinger,” he realizes he can’t leave the pool because everyone will see his erection. A large-breasted, female lifeguard bends over to try to help him, but he refuses, saying she’s “making it worse” as her breasts loom large in his face.

Eventually, rescue workers must pry Bill out of the pool, but as they pull him up out of the water, his swimming shorts fall off in front of everyone, leading kids to tease him for his “fucking stinger” and “front tail.” 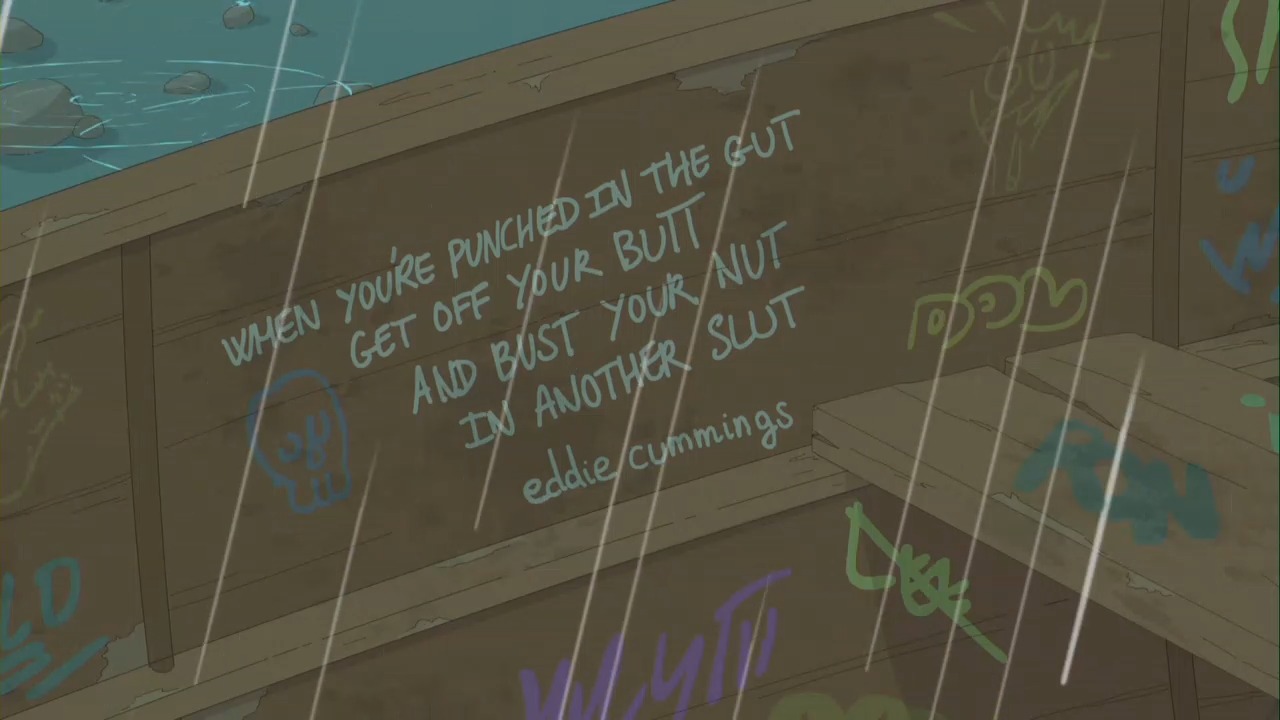 Later, during the Murphy family’s summer vacation in episode seven, Bill is broken-hearted over a fight with Bridget (the two ended up dating after the “stinger” incident because Bridget was impressed that Bill was such a “badass.”) As he wanders off to a lake, he enters a rowboat and sees a message written in graffiti that reads, “When you’re punched in the gut, get off your butt, and bust your nut, in another slut.” (see image) Great advice for a preteen child, F is for Family writers! #eyeroll

Of course, we still were treated to the show's typical anti-Christian bigotry as well. While many of the characters on the show are Catholic and attend “Our Lady of Perpetual Suffering” Church, none of them act like true believers, especially when it comes to praying as we see in episode seven, “Morning Prayers,” as Frank curses at God, complains about the Bible's "bullshit stories," and saying of the Eucharist, “No offense, but Your Son, He tastes like shit!”

Frank's method of prayer seems to have been passed down to his son Bill, who, in episode ten, "Bill Murphy's Night Off," prayed, "Mr. Christ, God? Uh, it’s been awhile. My name is Bill Murphy. I was an altar boy last Christmas Eve. My friend who beats me up tried to steal chalices from the church vault, but I hit him with a Crucifix. Thanks for dying on a wooden Cross and not something soft like a cloud."

In episode five, “Battle of the Sexes,” Frank’s neighbors Chet (Vince Vaughn) and Vic (Sam Rockwell) discuss how great flying is, as Chet tells Vic, “Oh, you’ll see when you’re up there in the sky, Vic. You’ll feel like you can reach up and tickle God’s balls.” Vic replies, “Oh, man, I hope He returns the favor. I’ll bet He’s got long fingers.”

In episode 7, "Summer Vacation," the priest is hit on by Ginny Throater (Mo Collins), whose husband came out as gay last season and left her. The priest gently turns her away, but when she leaves he mumbles, "Not even with the devil's own dick."

But, as cringe-worthy as the anti-Christian garbage is, it pales in comparison to the sexually explicit depictions of children.

According to Wikipedia’s section, “Child Pornography Laws in the United States,” the PROTECT Act of 2003, signed into law by President George W. Bush, criminalizes material that has "a visual depiction of any kind, including a drawing, cartoon, sculpture or painting" that "depicts a minor engaging in sexually explicit conduct and is obscene" or "depicts an image that is, or appears to be, of a minor engaging in ... sexual intercourse ... and lacks serious literary, artistic, political, or scientific value." In one court case against a man convicted for downloading sexually explicit animated photos of minors, the court ruled that “it is not a required element of any offense under this section that the minor depicted actually exists [sic]."

We get that childish, immature, and juvenile comedians such as Burr love to push the limits on being offensive. And yes, this is supposed to be an absurd cartoon geared toward adults. But there are lines that should never be crossed, even when it’s “just a cartoon.” To dismiss disturbingly graphic scenes sexualizing children simply because they’re animated is dangerous. Especially when such scenes, animated or not, could provide fodder for demented pedophiles, and could even entice them to act out their depraved lust on a real child. That’s not something that we can turn a blind eye to.

How such disgusting depravity ever got approved, even for anything-goes Netflix, is beyond me, but the sexualization of children appears to be becoming a disturbing trend for the streaming service, to the point that at least one blogger has put out a call to boycott Netflix in protest.

In another equally disturbing cartoon on Netflix, Big Mouth, there’s a joke in the show’s trailer that “Netflix insisted on” including disturbing and “fucked up” sexually explicit scenes featuring children. But according to the same cartoon, Netflix apparently is hoping that viewers will simply wink at and ignore such smut, as this dialogue from the show reveals:

WRONG. If we want to protect our children from child predators, we start here, protesting this slippery slope to normalizing pedophilia. We need to let Netflix and the creators of such smut know that they can’t “get away with” it. Ever.