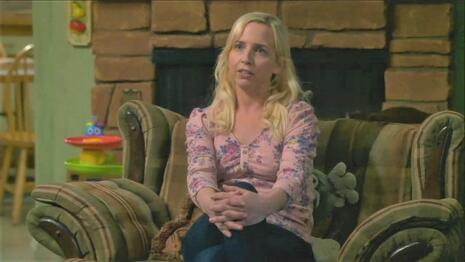 In the episode “Money, Booze, and Lies,” the late Roseanne’s daughter Becky (Alicia Goranson) runs into an old classmate named Mikey that she used to compete with for highest honors in their high school. Mikey has gone on to become successful and wealthy, while Becky is ashamed that she’s a poor waitress and a single mother.

Mikey asks her out to dinner, but Becky tells her sister Darlene (Sara Gilbert) and her Aunt Jackie (Laurie Metcalf), she’s “going to pass,” a moment which the writers somehow decided was an opportune time to make a plug for Warren:

Becky: He asked me to dinner, but I'm gonna pass.

Jackie: Why? It could be fun catching up.

Becky: Nah. His imagination is better than the reality. I'd rather keep the illusion that I'm too busy to post on Instagram because I'm a success, not because I got kicked off for liking too many photos of Elizabeth Warren.

Of course, it’s a liberal politician that Becky is obsessed over. We never hear compliments like that about a conservative. In fact, the opposite is true, especially in the many reboots made because Trump was elected president in 2016. If it’s a conservative name mentioned, you can pretty much guarantee the connotation will be negative. Trump definitely receives the majority of hate, but Hollywood makes sure to share the hate with other notable conservatives while offering praise for well-known liberals.

This is also not the first time The Conners promoted Warren. In a special, live election episode that heavily pumped up Democrat candidates, including Warren, the show also perpetuated the lie that Warren was a single mother.

Ironically, the original show that The Conners spun off from, Roseanne, had actually been more favorable towards Trump and conservatives, with main characters Dan (John Goodman) and Roseanne (Barr) being Trump supporters. Since Barr’s exit, however, the show has sadly taken a huge left turn and it doesn’t appear that they’ll be course-correcting anytime soon.

Conservatives Fight Back! This episode of The Conners was sponsored by Subaru and Allstate. Click each advertiser for their contact information so that you can let them know how you feel about this episode!