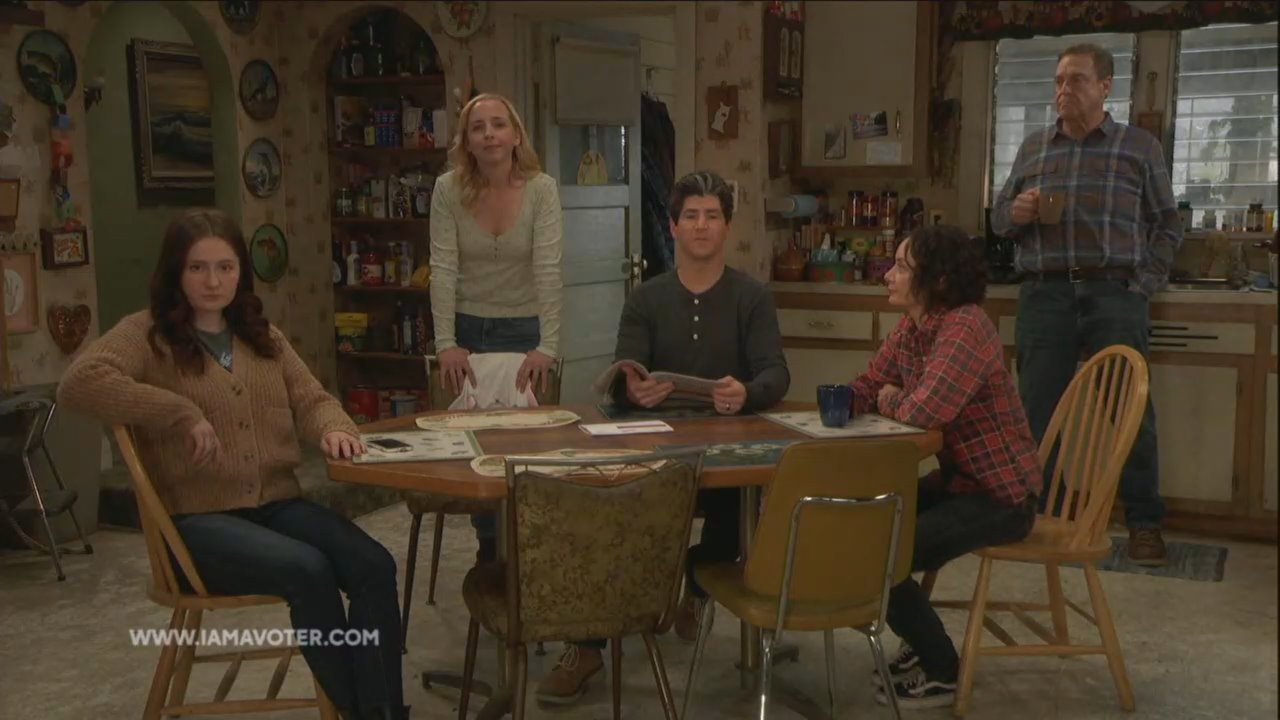 Most people watch TV to get away from the real world and politics. Liberal shows like The Conners won’t let you forget about real-world politics for even a second. The special live episode of the ABC sitcom proved it by wasting half the episode plugging the New Hampshire primaries.

The February 11 episode “Live from Lanford” takes place in real time, depicting the results of the New Hampshire primaries. In fact, the show even takes time showing real ABC News broadcasts covering the actual results, such as Bernie Sanders taking the lead and Andrew Yang eventually dropping out of the race. The episode wants to act like this is simply taking an interest in the general election (even plugging www.iamavoter.com in the commercials), but it’s pretty clear where we’re going as the episode continues.

For example, as youngest son Mark (Ames McNamara) watches the primaries for school, the rest of the family comes to chime with in their opinions. Those comments include how Pete Buttigieg has a great healthcare plan and the lie that Elizabeth Warren was a single mom. Basically, every candidate with a D next to their name gets name-dropped in this episode.

Rachel Scott: ...What they thought was strong performance by Amy Klobuchar.

Harris: Is the primary over?

Mark: No, but Sanders is doing well. Some experts think if he wins, there's a chance he might stop yelling.

Harris: Is your boyfriend still running?

Mark: Oh, my god. If you don't take this seriously, you get the government you deserve. It just so happens that Pete has interesting ideas about health care and a puggle rescue that is really cute.

Harris: Becky, we better get going. We wanna get there before your dad.

George Stephanopoulos: It is a dogfight on the Democratic side. Bernie Sanders is leading.

Mark: Man, Warren could use a boost.

Becky: Yeah, it's nice to have a candidate who’s also a single mom. She provided childcare for the caucuses last week. I was this close to flying to Iowa, so I could go to a movie.

More candidates get referenced as Darlene (Sara Gilbert) tries to convince her eighteen-year-old daughter Harris (Emma Kenney) to vote for the first time. She even pitches Elizabeth Warren and Bernie Sanders’s plan for free college tuition, reminding her that these candidates are “trying to help” her. Considering there is no suggestion that Trump is trying to help people, it’s no wonder at this point which side this show supports.

Darlene: Because some of these people are trying to help you. Warren and Sanders want to pay your college tuition. Yang wants to give you $1,000 a month. And Biden wants to decriminalize marijuana.

Harris: Wow. Well, if I ever get to college, I am going to need some weed and spending money. Okay, I’ll vote for them.

Darlene: This country is doomed.

Of course, it wouldn’t be a proper election episode without a drag on Donald Trump. The episode’s opening features totally unoriginal commentary on his tweeting habits, as if no one’s ever touched upon that in the last three years.

Mark: Why are you scared of the government? They work for us. You can even tweet the president and tell him what you want.

Mary: I'm not scared. Hi, Donald Trump, since you work for us, can you send us some cheese packets for our macaroni. This is real, Mary Conner, from Lanford, Illinois.

Darlene: He'll probably answer back. That guy loves to tweet. That's how we learn where our military is.

If this is their best material, it’s going to be a long nine months until the election. And heaven help them should Trump get reelected.