‘Murphy Brown’ on 2016: ‘If Hillary Had Won, We Would Be Dancing in the Streets’

If Hillary Clinton had prevailed in 2016, there would have been no Murphy Brown revival. The cast would, instead, have been “dancing in the street.” That’s the assertion from the show's star, Candice Bergen. But don’t worry, the series isn’t a “Donald Trump bashing show,” according to CBS This Morning co-host and Obama friend Gayle King. Except, of course, it is. It's the same liberal show it always was.

Bergen and co-star Faith Ford appeared on CBS, Wednesday, to promote the 2018 revival of the show. Bergen asserted that “we definitely wouldn't have had the show” if Trump hadn’t won. She added, “We didn't have a motivation do it. We didn't really have the meat or a story. And then when the election happened, I mean, if Hillary had won, we would just be dancing in the streets.”

Dancing in the streets if Clinton had won? Oh, that sounds fair. King helped promote the fiction that “it's not a Donald Trump bashing show either.” Co-star Ford agreed, claiming:

No, it's not. It's really not. We're staying on point with issues. I mean, there really are a lot of issues going on that were going on then and are still going on. And we’re dealing with them. And that’s predominately what our show is about. 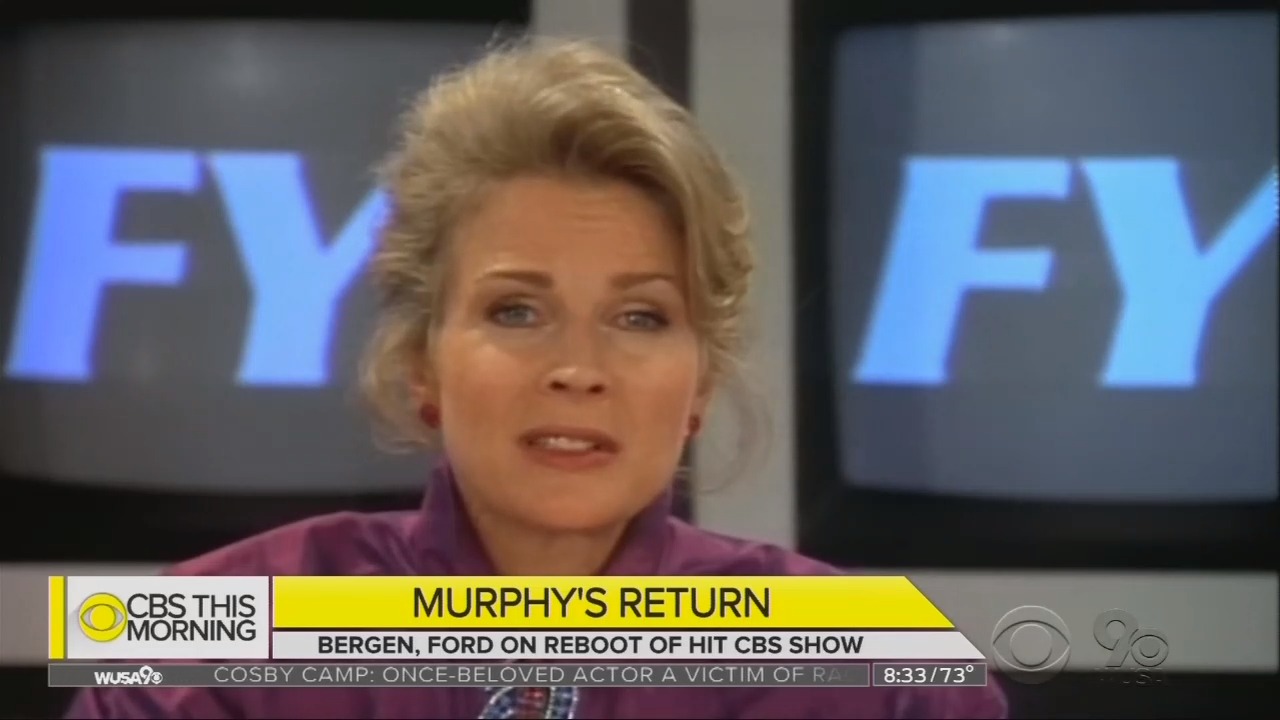 Except, of course, the show is anti-Trump. The decidedly non-conservative Rolling Stone reviewed the revival series:

The season premiere climaxes with Murphy swapping insults with President Trump during a live broadcast (him via Twitter, her glaring at the camera). The second episode has her lecturing Sarah Huckabee Sanders about the fundamental dishonesty of her press briefings, while the third sees her verbally dismantling a barely-disguised version of Steve Bannon...

Sounds pretty fair, right? Reviewer Alan Sepinwall derided the comeback as a “a smug and preachy take on the politics of the day.” He added that it “seems designed to alienate the people who agree with it at least as much as the Trumpists who won’t be watching in the first place.”

Again, this is liberal Rolling Stone saying these things. So, don’t believe the stars of Murphy Brown. This is just another sitcom designed to remind you that Hollywood hates conservatives.

A partial transcript of the show is below. Click “expand” to read more. 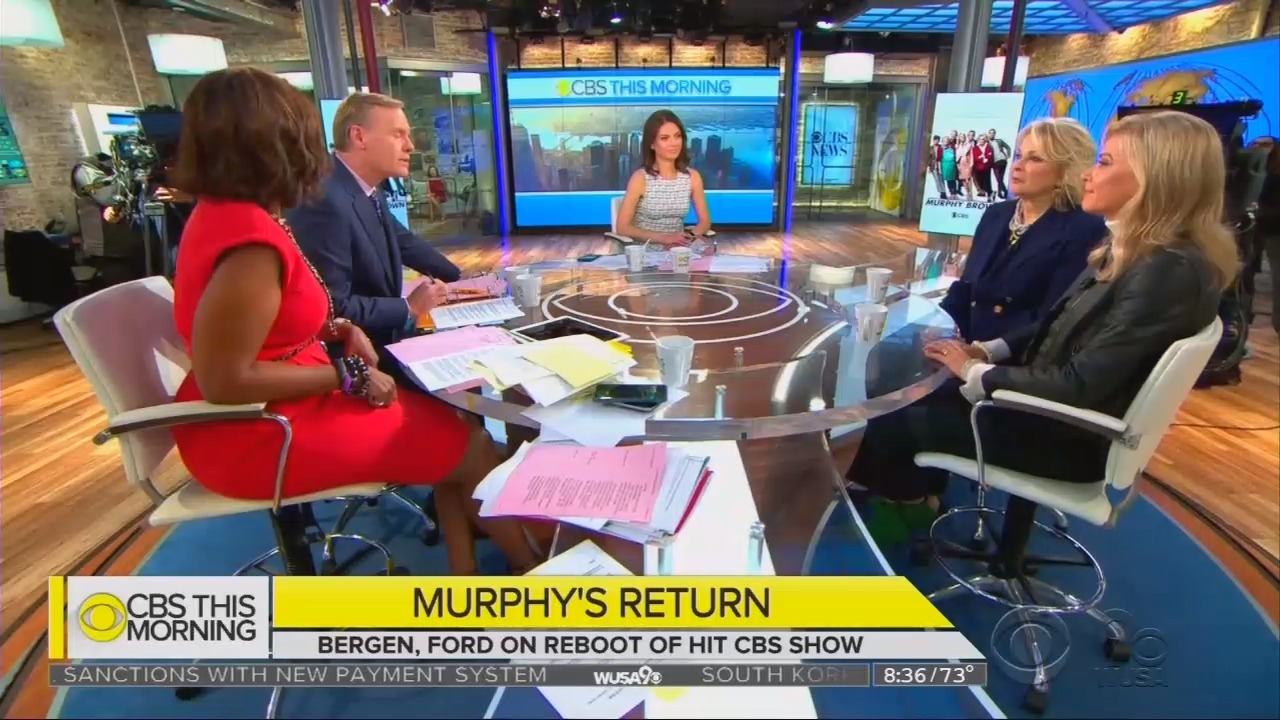 GAYLE KING: CBS reboot of Murphy Brown, one of this season's highly anticipated shows and picks up 20 years after the finale. The hit comedy first aired in 1988 staring Candice Bergen as the tough talking TV journalist. Actress faith Ford played the perky TV reporter named Corky. Murphy Brown was considered a groundbreaking show at the time, winning 18 Emmys over ten seasons. It portrayed a career focused independent woman. The way the show tackled serious issue like politics and family values made a lasting impact on our culture.

[Clips of Murphy Brown, including fight with Dan Quayle.]

KING: I’m so excited about this reboot because I remember Murphy Brown. But when you look at those clips, she seems very gentle compared to what we see now. She was ahead of her time, wasn’t she Candice?

CANDICE BERGEN: Yeah, she was, as it turns out. I don’t think we realized just quite how far ahead she was when she was created. Diane English wrote a woman we hadn’t really seen on television who was totally self confident, didn’t care what other people thought.

KING: You have said if there wasn't the election of Donald Trump you might not have this show. What do you mean?

BERGEN: We definitely wouldn't have had the show because, really, we've done the show and we've done it as well, think, as it had ever been done. And we didn't have a motivation do it. We didn't really have the meat or a story. And then when the election happened, I mean, if Hillary had won, we would just be dancing in the streets. But I think in the current situation it gives us a chance to make a response.

KING: But we should say, Faith, it's not a Donald Trump bashing show either.

FAITH FORD: No, it's not. It's really not. We're staying on point with issues. I mean, there really are a lot of issues going on that were going on then and are still going on. And we’re dealing with them. And that’s predominately what our show is about.

BIANNA GOLODRYGA: And you do offer opinions on certain issues, though, and you see where you're your headed and your minds are. Are you concerned at all about abandoning viewers?

BERGEN: Are you, Faith?

FORD: We never were before.

BERGEN: Because I don't want to go through that.

FORD: Well, I have to say for all those people in the middle -- I mean, I speak for the world because I live in Louisiana when I'm not in New York. I sort of always lived in the middle and I see myself that way. I understand both sides. I love Republican as well as Democrats in real life and so I believe there's a way for our country to get along no matter what. I think the divisiveness comes from the top. You know, it really does.

KING: One of the interesting story lines, because when you had Avery back in the day that was a scandal of sorts, a single woman having a baby. That was a big scandal. Fast forward to 2018, it's like, okay, we're throwing baby showers for single women. But now Avery, your son, is on a competing morning show. You guys have one morning show, Murphy in the Morning. Avery's on a competing show called the wolf network which I also think ---

KING: A very conservative network. Now, I think that’s going to be some of the most fun moments on the show. What was that like, that dynamic between the two of you.