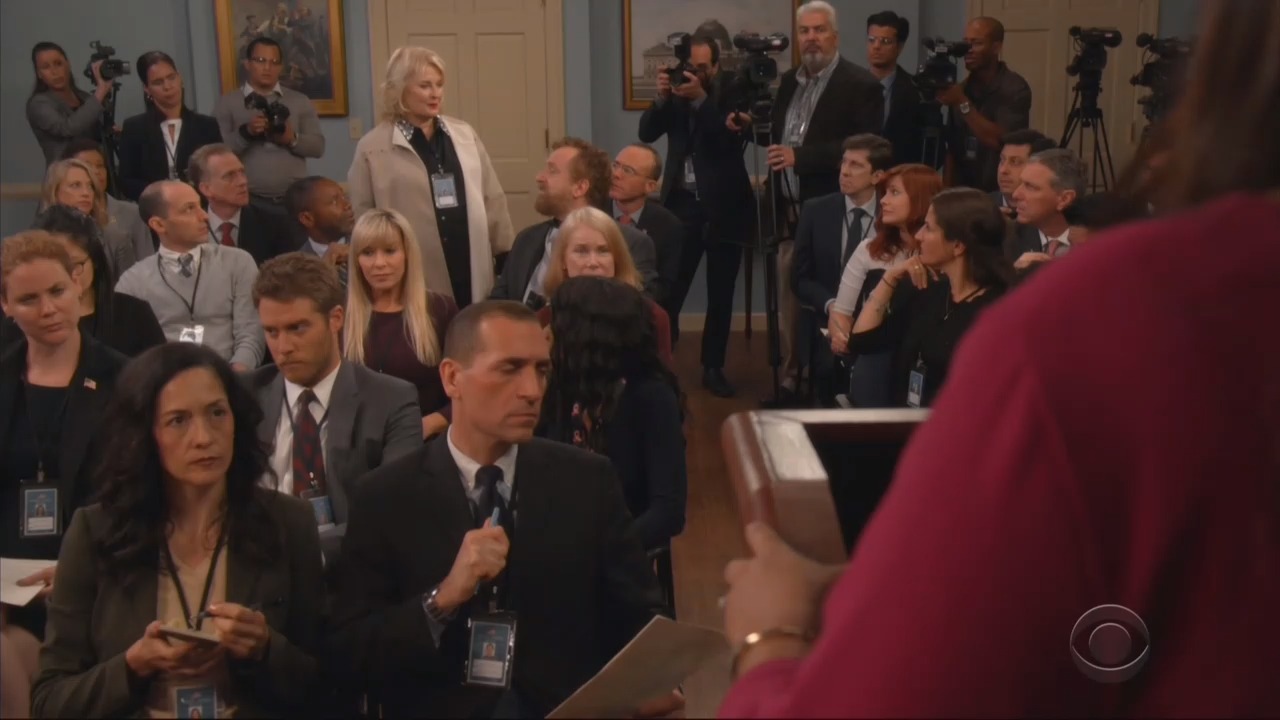 The second episode of CBS’s rebooted version of the political comedy Murphy Brown aired October 4 and the chosen hot-button issues to punch were: bashing White House Press Secretary Sarah Huckabee Sanders’ honesty and the introduction of a DACA student. If it were not for lame liberal talking points, this show would have no dialogue.

Veteran news anchor Murphy Brown (Candice Bergen) is jealous that her son, Avery (Jake McDorman), is given press credentials to attend a White House press briefing. He tells her (attired in a Pod Save America t-shirt) that he even has a special camaraderie with Sarah Huckabee Sanders after all the time they spent working together on the campaign trail. Ugh. Murphy concocts a way to crash the press briefing and deliver a virtue-shaming lecture to the White House Press Secretary and her fellow journalists.

Donning a disguise of a brown wig and foreign press credentials (from Le Monde), Murphy was able to sashay into the White House and the briefing room due to lack of White House security. The show has to make the administration look incompetent, you know. The guard at the gate left the guard house unattended with a note reading, "Back in Five." Really?

So, after jumping the line and getting the floor to ask a question, Murphy launches into her attack on Sanders, with some clever editing of actual footage of the press secretary to make the scene look real. Murphy asks her, “Why do you lie?” Then she demands that the others get up and walk out in protest over the alleged lack of transparency of the administration. The funny part for me was that she was surprised that they all remained in their seats.

Sarah: I refer you to the president's outside counsel. Next question. I see we have some new faces here today. Avery, I look forward to taking your question, but, uh, I think I'll save the best for last. Welcome. Next question. Fred.
Murphy:Thanks for taking my question.
Avery You've got to be kidding me.
Sarah: A-actually, I said "Fred."
Murphy: That's so weird. I heard "Murphy."
Sarah: Uh, I don't know how you got in here, but it's inappropriate. April.
Murphy: If you really want to talk about what's inappropriate, how about the way you do your job?
Miles: Uh-oh.
Frank; Game on.
Murphy: The role of the White House Press Secretary is to create transparency in the government and tell the American people the truth, but that's not what happens in this room. Whether it's about a meeting with Russians in Trump Tower or a made-up mandate that requires separation between parents and their children at the border, it all comes down to the same thing, so here's my question -- why do you lie?
Sarah: I think that's an absolutely ridiculous question.
Corky: Wow.
Frank: She used the "L" word.
Murphy: And how demoralizing is it for us to be called the enemy of the people? I mean, how do we go back to our newspapers and our magazines and our networks knowing that the most basic principle of journalistic integrity -- to report the facts -- is totally out of reach? If we can't get to the truth, why are we even here? I say we get up and walk out right now. Let's show this administration we're not gonna take it anymore. Come on, let's go! Look, I know a lot of what I've said here has to resonate with you. I know a lot of you... ...Personally. Some better than others. Maybe I don't know you as well as I thought I did.

So, the next time you hear a liberal woman demand that all women support other women, remember that what she really means is all women have to support all liberal women. Conservative women don't count.

Hot button issue number two was the introduction of a DACA student, Miguel Gonzalez (Adan Rocha). Miguel comes in to apply for a job at Phil’s Bar and Grill and the new owner, Phyllis (Tyne Daly) interviews him. He tells her he is in need of a job because his college scholarship doesn’t cover everything. He has to pay for “books, meals, the border wall.” Then Phyllis makes a joke by asking if they (meaning Mexico) really were going to pay for the wall.

Phyllis: So, Miguel Gonzales, you are interested in the exciting, fast-paced world of the restaurant business. You know how to put out a grease fire?

Miguel: My parents run a food truck, so believe me, I've seen it all.

Phyllis: And I see you're in college. You kids, you love your beer pong and toga parties. How do I know you'll show up for work?

Miguel: I need the money. I have a scholarship, but [clicks tongue] It doesn't cover everything. I still have to pay for things like books, meals, the border wall.

Phyllis: Oh, great, so you guys are gonna pay for that? Not that I want it. I just don't want to pay for it.

Miguel: We'll climb over it anyway. But not me 'cause I'm DACA.

Phyllis: So, you're a DREAMer? Me too... As in I never dreamed I'd be doing this.

Miguel: What, talking to a Mexican?

Phyllis: No. Running a restaurant. I inherited this place from my late brother. As it turns out, I'm not a natural behind the bar. People sit down and unload. They got fired, their mistress got a lawyer, they're under indictment for collusion with a foreign government. Please. I have my own problems.

I assume that upcoming episodes will include Miguel as Phyllis’ new employee and we will be made to feel sorry for him. Never mind the guy has a scholarship that could have gone to an American college student.

Murphy Brown is just as predictable as I knew it would be. The jokes are only funny to half of the country – the liberal half that is still unable to accept the 2016 election results. The creator of the show is trying to promote the reboot as a middle of the road approach to a political comedy. Murphy and her colleagues “are trying to present the facts in a straight down the middle way,” English said. “Their show is issue-oriented and facts, with no personal opinion.” Well, if this is middle of the road, I don’t even want to imagine a biased approach!

This show has always embraced a liberal political storyline and the reboot is no different. When even some liberal television critics are mocking the lameness of the banter and writing, you know the show is probably in trouble.