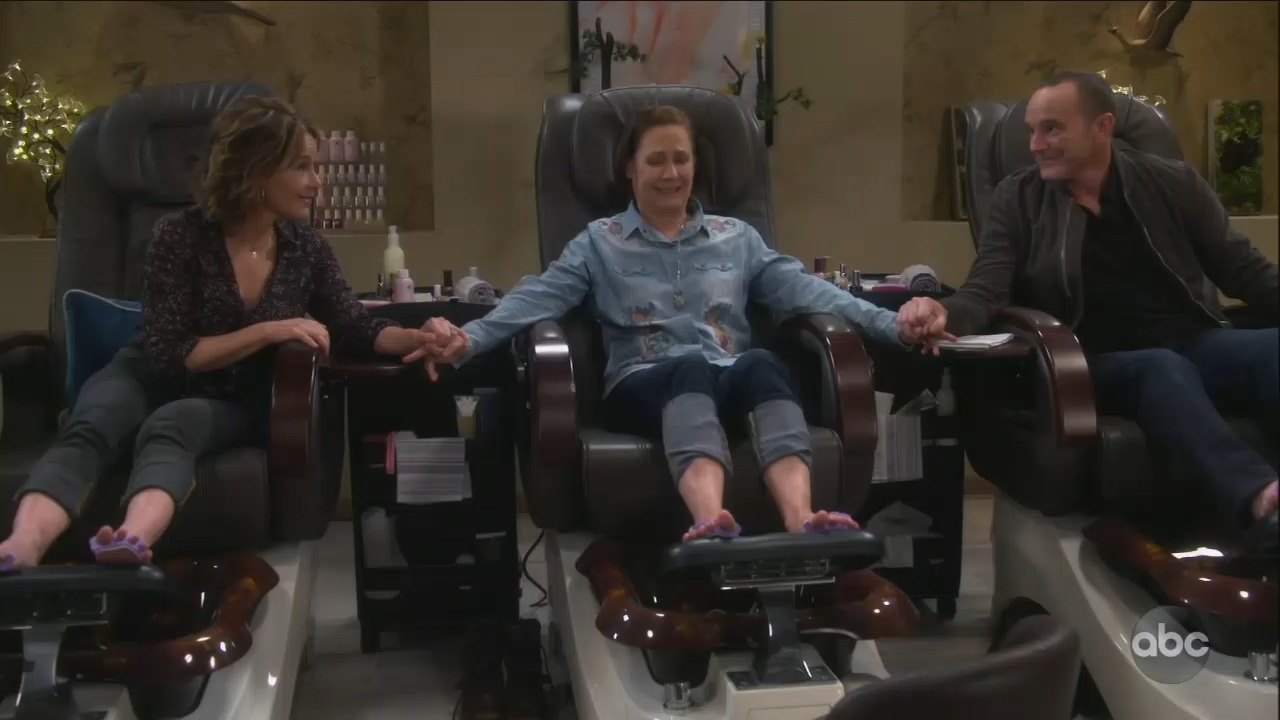 This may be the last season of The Conners, but the show appears determined to go out with a liberal bang and insert as much of their agenda as they can fit in before the show officially ends. On Tuesday’s episode, “Bad Dads and Grads,” the writers managed to put in a plug for Planned Parenthood and promote Hollywood’s latest cause de jour- throuples.

Darlene (Sara Gilbert) has been considering having a baby with her boyfriend Ben (Jay R. Ferguson) since he wants a child so badly. She enters the family’s diner after a trip to Planned Parenthood and explains that the abortion giant is “a good place to go if you're poor and actually planning for parenthood.”

Darlene: What do you have for being underweight and depressed?

Becky: Wow, I guess somebody got a glimpse of themselves in the window on the way over.

Darlene: No, I was at Planned Parenthood, which is a good place to go if you're poor and actually planning for parenthood.

I’m sorry, but are we really supposed to believe that an organization that’s known for ending parenthood is supposed to be a good place to go for planning it? Hardly!

Next, Jackie (Lori Metcalf) is trying out a dating app but isn’t having much luck. She ends up being invited to dine with a couple who is next to her table after she’s stood up for a date. Janelle and Ron have been married for 30 years and their children are grown.

Jackie thinks it’s all just innocent fun, despite receiving red roses and going on romantic dates. Finally, the jig is up and she realizes what the couple really wants from her:

Jackie: Listen, you guys have paid for everything this week, and I'm starting to feel like maybe I owe you, hmm, I don't know, money.

Ron: Nonsense. It's nice to have someone to spoil. Our kids are grown, and, well, we don't like them.

Janelle: And we just can't imagine not having you around.

Jackie: Oh, would you look at that.

Janelle: Jackie, this is awkward because we've never done this before, so we're just gonna say it.

Ron: We want to invite you into our relationship. Which right now feels like the most natural thing in the world.

Janelle: So, we were looking for the right person, and then, out of the blue, you found us.

Ron: Really? The red roses, the Love shack, the locket...?

Jackie: Oh, this is a locket? Oh, and it opens up! And there's the three of us.

Ron: So, what do you say, Jackie? Do you have room in your life for us?

Jackie: Well, it's -- it's a big decision. Do I have a little time to think about it?

Janelle: It's important to us that you want this as much as we do.

By the end of the episode, Jackie is so impressed by all of the lavish vacations and gifts the married couple is treating her to, that she decides she wants to continue. When Darlene is curious about what a throuple is, Jackie explains, “It's when three people have an equal relationship, just like a couple.”

Becky (Alicia Goranson) asks, “Are you sure you're ready for this? What happens when Ron wants to have sex with you? Or Janelle? Or Ron and Janelle?” Becky replies as she walks away with a swagger, “Um... I'll deal with that when we go up to our lake house in Door County next weekend.”

What will they think of next? A polygamist family marries single mom Becky and they all go to abortion giant Planned Parenthood to plan out all of the sister wives’ pregnancies? Actually, I guess we shouldn’t be giving them any ideas…