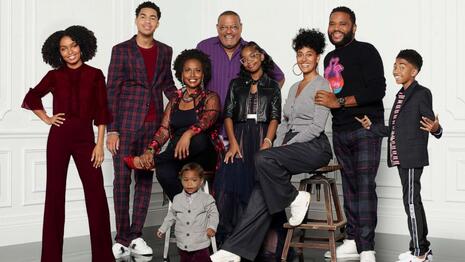 An episode of ABC’s racial comedy black-ish that even the liberal network deemed too controversial to air was finally made available for viewing on the streaming site Hulu on Monday. From painting Trump as a “scary,” “Shady King” that “everybody” is afraid of, to praising Al Gore for caring about climate change and winning the popular vote (while pointing out that Trump lost it), the show was pretty heavy-handed against Trump and conservatives.

But, that's pretty much the norm for black-ish, which makes one wonder why it was canceled in the first place.

The episode, “Please, Baby, Please,” which was meant to be from the fourth season of black-ish in 2018, starts with main character Dre (Anthony Anderson) trying to get his infant son Devante (August and Berlin Gross) to sleep. He reads the famous bedtime story “Goodnight Moon” to him, but after a few sentences, Dre deems the book “some really white mess,” and replaces it with the book “Please, Baby, Please” by Spike Lee and his wife Tonya Lewis Lee that features black characters.

When Devante continues to cry, Dre’s wife Bow (Tracee Ellis Ross) tells him that the baby is afraid of the thunderstorm and that Dre just needs to talk to him to calm him down. Dre tells the baby, “…I don’t think that’s what it is. I think the same thing’s scaring you that’s scaring me. It’s scaring everybody.” What’s that “same thing?” Trump, of course, (#eyeroll), as we soon discover when Dre makes up an anti-Trump allegorical story for his infant son who can't even speak yet. (Note: this clip was edited for brevity. You can see the full scene and show here.)

Dre: “You see, what feels like a long, long, long time ago, but really was just a year ago, America got a new boss. Let’s call him the Shady King. And when the Shady King came, even though he scared the (bleep) out of Daddy, Daddy and Dave Chapelle were willing to give him a chance… When this dude said he didn’t believe in political correctness, giving him a chance was harder than you think. I mean, the Shady King was even scarier than Daddy could ever imagine. This sucker wanted to build a wall between us and our neighbors. He seemed to have private meetings with our enemies. And when it came to his subjects some thought that the Shady King appeared to be out of touch with what they needed. And some people felt he cared more about trophies than his subjects... I’m not really sure how we got here, but I think it started in 2008 with this guy who people say is just like your daddy. Let’s call him Prince Barry…the people of the kingdom saw Prince Barry’s reign as a sign that the kingdom was changing, and it felt good. So good, in fact, that the people of the kingdom started looking for other things to change… And it turns out that everyone was not a fan of different. There were a lot of people in the kingdom who weren’t happy about these changes and wanted to change them back. They thought they were being ignored. And you know who wasn’t ignoring them? That’s right. The Shady King.

There were important topics in the show that the left and right can easily agree on, such as disgust towards the KKK and white supremacists of today. Things unfortunately go left again as Dre hints it’s Trump’s fault. “Pops, I’m telling you, with politics the way they are now, they’ve found a sales pitch that’s resonating with people that aren’t your average card-carrying Klan members.” When Pops (Laurence Fishburne) asks what the sales pitch is, Dre answers, “white pride.”

Pops argues that “white pride” isn’t “a real thing,” stating that “pride” is an indication that someone has overcome adversity. Dre replies, “That’s the thing, Pops. After eight years of having a black president, a lot of these people do feel they’ve overcome adversity.” Pops replies, “Well, if black folks making that one, little step forward is enough to lead our entire country this far back, we in a hell of a lot of trouble.”

Wait a minute. Are they trying to argue that conservatives felt having a black president was an adversity? And that Trump winning was some sort of revenge to punish black people and set them back? Listen, black-ish writers, it wasn’t the color of Obama’s skin that conservatives didn’t like. It was his politics. And trying to claim otherwise is an insult to every black conservative (you know, the ones you love to demonize for refusing to be part of the Democrat plantation, even if they're an intelligent and renowned pediatric brain surgeon), including new black conservatives in the “Walk Away” and “Blexit” movements who recognize how much Trump has done for their communities, and how little the left has ever done for them.

Later in the show, Dre has a conversation with his son Junior (Marcus Scribner), who also can’t sleep because his school wants to suspend athletes who take a knee during the National Anthem, a topic the show has addressed at least twice before in its history. Dre assumes he’s filled with “fury and rage” but Junior suggests otherwise:

Dre: “Look, son, black athletes using their platform to fight social injustice did not start with Colin Kaepernick. Muhammad Ali went to jail, lost his title, and almost went broke protesting the Vietnam war. Arthur Ashe, arrested on two different occasions fighting for human rights. Tommie Smith, John Carlos got blackballed for taking the biggest moment in their lives and making it into something bigger than them. These men took careers that they’ve trained and worked their whole lives for and put them on the line for us. Does that mean anything to you?”

Junior: “Of course it does. But, honestly, Dad, I’m just not sure I agree with the kneeling thing. I don’t even know what good it does, especially when people say that it offends the troops. I mean they put their lives on the line every day for our country.”

Dre: “Oh my God, Son, this is not about the troops. It’s about police brutality.”

Not about the troops? The ones who fought for the freedom that the National Anthem and flag represent? Sorry, but it’s very much about them, too.

Dre has a final conversation with his twins Jack (Miles Brown) and Diane (Marsai Martin) who come into his room because they can’t sleep, either. Their reason? Climate change:

Dre: “Hey, guys, relax. Storms are loud and they pass. There’s nothing to be afraid of.”

Diane: “That’s not the problem. Or actually true.”

Jack: “Have you seen what storms have been doing recently? There was hurricane Harvey in Texas, and Irma, and Maria, and Jose.”

Diane: “There was a hurricane every week in September. That’s not normal.”

Jack: “I saw on YouTube this guy, Al Gore predicted more storms were going to happen 10 years ago. Why didn’t you guys elect him?”

Diane: “Instead, you elected a guy who doesn’t seem to care about climate change.”

Trump (footage): “The United States will withdraw from the Paris Climate Accord.”

For the record, according to the U.S. Department of State, Trump withdrew the U.S. from the Paris Climate Accord, “because of the unfair economic burden imposed on American workers, businesses, and taxpayers by U.S. pledges made under the agreement.”

The episode’s ending didn’t age well, as Dre speaks of unity in his usual voiceover while a montage plays featuring people of all colors coming together to help in disaster relief. Even police officers are shown in a good light. “That’s the thing with our country. We’ve gone through a lot, but even when it’s darkest, we help each other out,” Dre says.

Considering the “ACAB” (an acronym for “All Cops Are Bad” or “All Cops Are Bastards”) sentiment that’s been trending in today’s culture as well as the current racial tensions and huge divide, such unity seems like a distant memory, sadly.