ABC’s comedy Blackish is known for taking on the issue of racism, but Tuesday’s episode was particularly heavy on the topic, celebrating controversial former NFL quarterback Colin Kaepernick as a hero and painting white men as ignorant racists who need to be saved from themselves.

In the episode, “Stand up, Fall Down,” main character Dre (Anthony Anderson) decides to take his teenage son Andre "Junior" (Marcus Scribner) to work with him as an intern.

While there, Andre witnesses Dre’s white coworkers and boss, who are usually painted as racially insensitive, suggesting racist ideas for a restaurant ad campaign they’re working on.

Leslie: Well, young man, you have chosen a great time to be here because your dad just hit it out of the park with the Google campaign.

Dre: You hear that? They put some respect on your dad's name.

Leslie: And we're going to need another home run with our new client, Hometown Market. They -- They're -- They're trying to take their comfort food from the suburbs to the urban space.

Leslie: Connor's right. It's -- It's the blacks. And, uh, some Hispanics. You know, people who ride the bus.

Dre: Okay, guys. We're getting off track, all right? Maybe we should look at this Hometown Market Menu. Maybe that will give us some ideas.

Connor: These names are kind of bland. "Tuna melt"? "Turkey pot pie"? Maybe we can give these dishes new urban names. 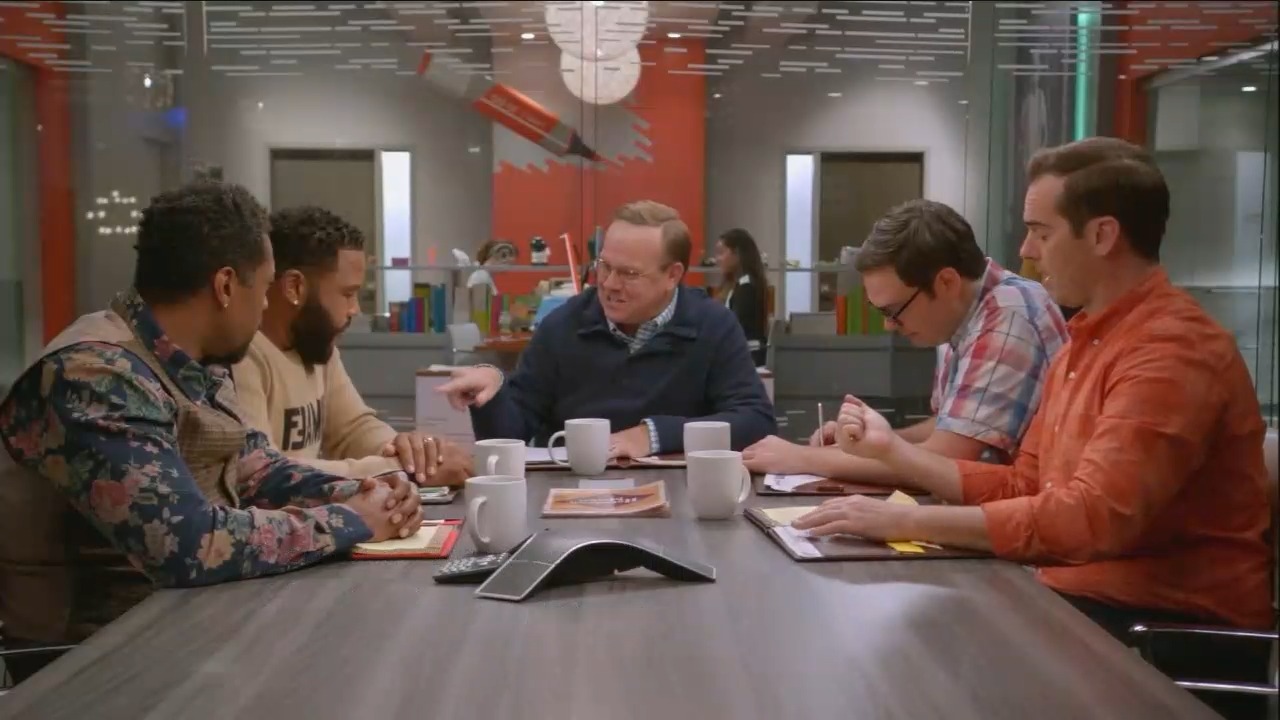 Dre: Okay, we like a lot more than just rappers.

Leslie: Yeah, of course you do. But how about this? The Run DM Seafood Tower.

Josh: Or -- Or the Kanye Western Omelet.

Dre: Why don't we just move on for now, okay? And, you know, I'll look at all these things on my own a little later.

Andre is upset that his dad didn’t take a stand and speak up against the offensive ideas, and when they arrive home, Dre has a talk with his wife Rainbow (Tracee Ellis Ross) about their son feeling he’s a sellout and defends himself by citing participation in other liberal causes:

Andre: Why don't you ask him?

Rainbow: What's he talking about?

Dre: He's not ready for the real world.

Dre: He accused me of being a sellout, Bow.

Dre: He crossed the line. Okay. I always take a stand. I-I donate to Black Lives Matter. I don't shop at H&M. And I didn't go back to Chick-fil-A after a week, like some people.

When Andre and Dre return to Dre’s work the next day, things go downhill even more, but this time Dre speaks up and the team decides to take a break to rethink their ideas. Andre is proud of his father for taking a stand and excitedly proclaims, "My dad is Kaepernick!”

Andre: Dad, that was amazing! Mm-hmm. The looks on their faces. You spoke truth to power!
Dre: You know what, son? I'm glad you were there to witness it.
Andre: Yeah, my dad is Kaepernick.
Dre: Ah, well, you know, son, I just do what I can.
Leslie: Hey, Dre. Oh. Junior. Ah, listen, we were chatting, and we actually like the direction we're headed, so I decided that we're gonna keep moving on the campaign without you, so take the rest of the day, and I'll see you tomorrow.
Andre: At least you don't have to do it. That's good news, right?
Dre: No, it's not. They're icing me out, son. I am Kaepernick.

Umm, Kaepernick? The man who compares police officers with pigs and a “run-away slave patrol.” The man who celebrates former Communist dictator Fidel Castro? The man who started the NFL Anthem protests saying, “I am not going to stand up to show pride in a flag for a country that oppresses black people and people of color. There are bodies in the street and people getting paid leave and getting away with murder.” He’s hardly someone I’d think of as a hero for black civil rights, like the great Martin Luther King, Jr. or Rosa Parks.

At the end of the episode, the white male boss and coworkers go with their racist pitch to the client, which ends up being rightly rejected. That, in turn, leads the boss, Leslie, to sheepishly apologize to Dre and tell him they need him back in the room to work on future campaigns, just as Dre is preparing to quit over the incident.

“Okay, because I have some thoughts." Dre responds, "I can't be my best when I'm wasting my energy saving you guys from yourselves. Okay? You're gonna need to step up and do better.”

Blackish, you're gonna need to step up and do better than praising Colin Kaepernick as some kind of hero.