The racially charged ABC sitcom black-ish[sic] took to defending black, inner-city neighborhoods on Tuesday’s episode, “Good in the ‘Hood,” stating that they’re “stereotyped as dangerous” and that white people avoid them because they’re racist.

The show wasted no time addressing the issue, as the opening montage dives right into their talking points:

Dre: America has been described as a cultural melting pot. Every major city has neighborhoods that reflect that diversity. And they all have something to offer. People can go to Little Italy for great pasta, Chinatown for acupuncture and Eastern medicine, and the black part of town for... nothing. Because most Americans avoid the black parts of town, and we could get into all the reasons why. White flight, redlining, lack of business investment, slumlords, predatory lending, restrictive covenants... I could go on. But let's just say, "racism." See, while other cultural neighborhoods are seen as exotic, black ones are stereotyped as dangerous. But these neighborhoods are lively and vital. They go by a lot of names -- Harlem, Watts, Treme, and Atlanta. But they're all one thing to us… home.

After the opening montage, we see Dre (Anthony Anderson), his kids Jack (Miles Brown) and Diane (Marsai Martin) his wife Bow (Tracee Ellis Ross), and his sister Rhonda (Raven-Symone) in the kitchen. Rhonda is upset because the kids acted fearful when she took them to visit her black neighborhood. Rhonda says the reason they’re afraid is because Dre doesn’t bring them to black neighborhoods often enough, but Dre and Bow disagree, saying their kids are always around black people and black culture.

Of course, no episode of black-ish would be complete without a scene with Dre’s white, racist and ignorant boss and coworkers giving their opinion:

Dre: No. My sister thinks my kids are afraid of her neighborhood.

Charlie: MM. Where does she live?

Stevens: Well, they're not wrong, Dre. It's the ghetto.

Stevens: Well, it's still a place that I would not feel safe.

Connor: Exactly -- like Syria or prison or any place with a salad bar.

Dre: Okay, we have a different relationship with our neighborhoods, all right? You guys only get the negative representation. There is so much more there.

Charlie: So much more. If you're looking for a Baptist church, we got you.

Charlie: If you're looking for an AME church, we got you.

Charlie: Looking for a Church of God in Christ? We got you.

Charlie: Looking for a Church's Chicken? We got you.

Charlie: Just saying. We got a gang of churches.

Dre: All right, all right, we also have book stores and markets and history. Hell, I'd like to take my kids there more often, but it's -- it's just inconvenient.

Stevens: Ah, "inconvenient." Is that the new euphemism, Dre? Oh, let me try this. Okay, you know what else is inconvenient? Pit bulls. Rap concerts. A Lakers game.

Dre: I see what you're doing. And those racist fears are what keeps our communities on the margin while others become the nation's fabric. I, for one, am not afraid of our neighborhoods.

Charlie: Yeah, well... your kids may be. I have a suburban kid, and it takes real effort for me to make sure that Eustace is comfortable in a black neighborhood.

Dre: You make a good point. My kids are pretty suburban. I don't know who, but one of them is DVR-ing Riverdale.

Dre: Maybe I should check in and make sure they're not afraid.

Charlie: That's smart. Worked for Eustace. Now he's good in the hood. I can drop him off anywhere. And have.

After Dre discovers that his kids really are afraid of their aunt’s neighborhood, he tells them to, “Clear out your Saturday and sag your pants because we are hanging with the blacks. And I mean black blacks.”

As he drives through his sister’s neighborhood with the kids, he says in a voiceover:

I can't believe this was the place my kids were afraid of. The lawns are mowed. There are no loose dogs. People are jogging. That's right -- jogging. This place is safe. No -- it's a treasure. In fact, all kinds of famous people lived here -- Ice Cube, Tina Turner, John Singleton, Meghan Markle, Issa Rae, and former mayor Tom Bradley. This neighborhood is known as the Black Beverly Hills. And there's no better way to round off our visit to this vibrant community than a delicious soul food lunch at the iconic Lorraine's. 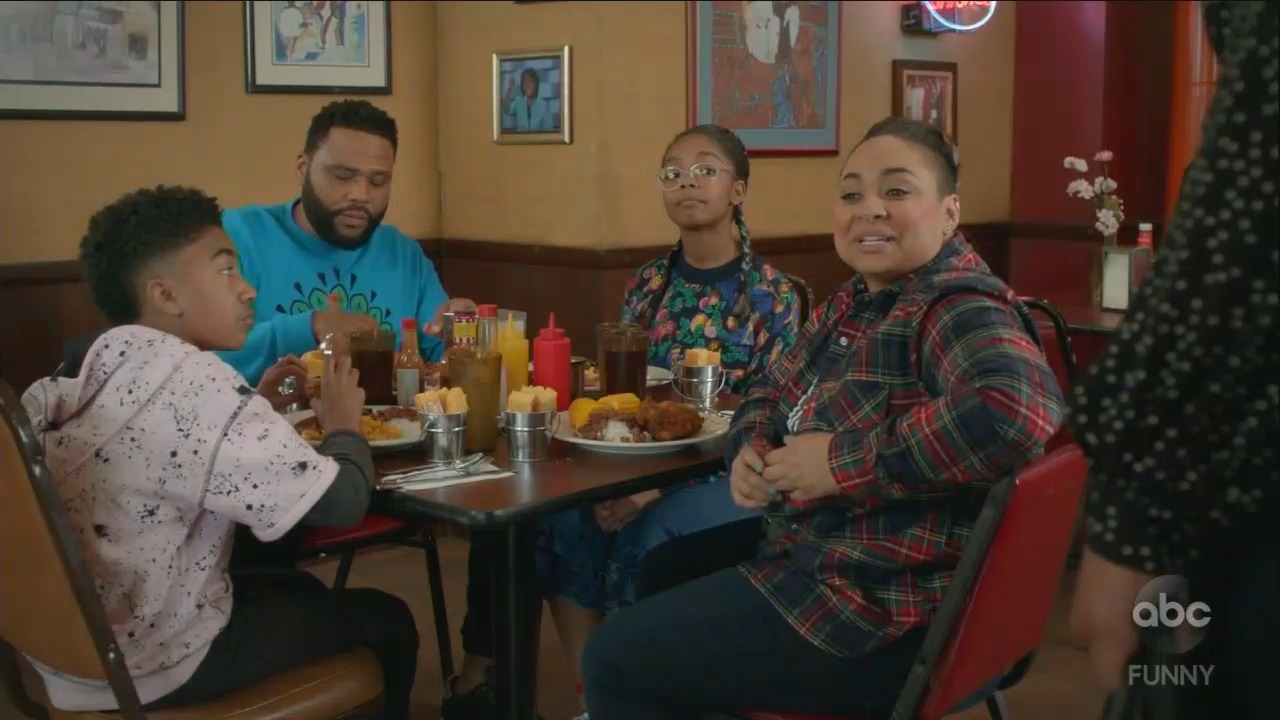 As they eat lunch, he says that the secret ingredient in the food is, “400 years of our history. You can taste the struggle.” Laila Ali makes a cameo at the diner and Rhonda shames Dre by telling her that his kids are afraid of her because she’s brown. Rhonda also notices that Dre isn’t wearing his expensive diamond earrings like he usually does and calls him a hypocrite. Dre argues that it’s all about street smarts, but we see a flashback where Dre asks a white stranger to watch his computer, watch, phone and car keys while he went to the bathroom at a café in his neighborhood.

Dre says he feels “perfectly safe” because he’s “amongst (his) people.” But when the kitchen door slams, he thinks it’s a gunshot and falls to the ground while grabbing Jack and yelling, “Everybody down,” and “Cover me!”

Dre later talks to his mother Ruby (Jenifer Lewis) about how ashamed he feels for his reaction. She tells him about a boyfriend she once had who came from Senegal and spoke only French. Once he moved to America and learned to speak English, he remembered less and less French every time he visited Senegal. Dre says, “I used to spend my time with only black people, but now I don’t. Maybe that’s what I lost.” Dre decides in the end that they need to go to Lorraine’s and the black Beverly Hills more often so they will all feel familiar with it.

I’ve never been to the “black Beverly Hills,” but from what they showed, it didn’t look like a typical inner city with a high crime rate. Thus, probably not a neighborhood that white people would be afraid to visit. I myself thought it looked pleasant as Dre drove through it. Not anything like some of the scary, run-down, inner cities I’ve found myself in at times. It seems a bit disingenuous to use this as an example of the ‘hood that people may be afraid to visit.

But Hollywood doesn’t care much about being genuine when they’re trying to widen the racial divide, cry racism, and fan the flames of ongoing race wars while lecturing black parents to spend their time with "only black people," apparently.