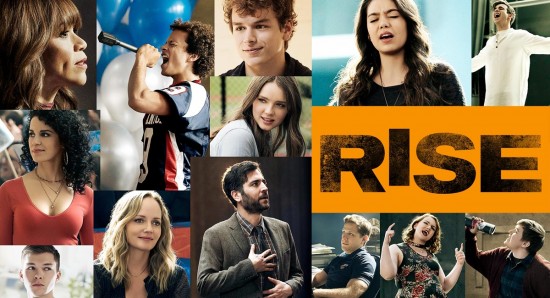 Note: Due to technical issues, some scenes were not fully recorded and may not match the transcripts completely.

They’re on a roll and they can’t be stopped! NBC’s ultra-liberal high school drama Rise is in its sixth week and they aren't showing any signs of slowing down their obvious leftist agenda.

Tuesday’s episode, “Bring Me Stanton,” brought us the fall of Catholic student Simon (Ted Sutherland) to temptation as he shares a kiss with male student Jeremy, quickly followed by Simon proposing sex to fellow student Annabelle (Shannon Purser) in an attempt to deny his attraction to Jeremy (Sean Grandillo). And for good measure, we were introduced to a new storyline where Sasha (Erin Commor) is facing a teen pregnancy and being hindered by her state’s parental consent law from getting an abortion without her father’s approval.

We’ve seen the gay plot point between Simon and Jeremy building since the first episode, but it was still shocking to see it play out, nonetheless. Only about seven minutes into Tuesday’s episode, Simon temporarily gives in to his attraction to Jeremy and the two kiss passionately for 8 seconds in the high school parking lot as the music swells. It’s definitely the first time I’ve ever seen such an explicit kiss between two homosexual minors on network television, but apparently it's happened a few times before on Fox and ABC.

Jeremy: Yeah, I know, but, am I crazy? I mean tell me if I’m crazy, but I thought you and I had something.

Simon: I don’t know what you’re talking about.

Jeremy: Are you sure? I mean it’s fine if we don’t. We can be friends.

Simon: Yeah, we’re friends. What else would we be? But right now, you’re acting kinda creepy.

Simon: That’s not what I…it’s just lately, you…you’ve been…you’re trying to get me to run lines with you and hang out with you and talk to you and I can’t. You know, I--I just can't.

Jeremy: Look, this is hard for me, too. Okay, it's not like I do this…

Simon: I don't know what you want.

Jeremy: I want you to be honest. Do you feel something when you're with me? Do you feel this right now?

Simon: I have to go.

Simon then seeks out the girl he’s been seeing off and on to cover up his feelings for Jeremy. But here’s where the writers sacrifice character believability.

Simon approaches Annabelle and tells her he wants to take their relationship to “the next level.” But instead of saying he wants to make their relationship official as she suggests, he tells her he means physically. And instead of being shocked or offended for being objectified by a guy who she just started dating and who isn’t even interested in being her boyfriend, she’s all for it.

Remember, this is Simon who, in episode one, didn’t want to play a gay character in the school’s controversial play “Spring Awakening” because he wanted to honor his Catholic faith. So, it’s a bit of a stretch to believe that he would seek out premarital sex with a girl he’s not really interested in to cover up his feelings for Jeremy, trading one sin for another.

Simon goes to the local pharmacy to choose a pack of condoms, and his best friend Lilette tells him, “You know the nurses' office gives these out for free.” Simon tells her he’s aware of that, but “it’s not the same selection,” as he chooses a pack that says, “Designed for her pleasure.”

Lilette asks Simon if he’s sure he wants to do this. Simon replies, “Why wouldn’t I be? Annabelle’s a great girl.” Lilette pushes further saying, “It just sounds like you're trying to prove something…Sex is a big deal…a really big deal. Don't do something just to do it. It isn't fair to Annabelle or to yourself.”

Simon tells her she’s “acting kind of weird,” and insists that he’s into Annabelle “big time.” “And we’re gonna have sex,” he says. “It’s a natural progression.” Sorry, writers, but premarital sex is not a “natural progression” for devout Catholics like Simon started out as. In fact, they're doing a better job of showing why his parents were right to object to the dark play and exposing their son to its values than the liberal writers' more probable goal of showing the effects of (in their view) the nefarious repression of his backwards, intolerant religion.

Later, the theater troupe breaks into an abandoned steel mill at night in an attempt to take the mill’s large sign for use as a prop in the school play. Simon decides a cold, dark, abandoned, industrial building would be the perfect place to have sex with Annabelle as their friends are partying nearby, and he leads Annabelle off to a secluded spot. The scene is pretty graphic considering these are underage minors. They end up being interrupted by the police, but it's pretty clear that Simon was able to accomplish his goal before they got there.

But there’s still one hot liberal topic that has been missing from this show so far. Abortion, of course! The writers aren’t going to let that one pass us by, as we discover in this episode that student Sasha is pregnant. It appears she wants an abortion but is being hindered by Pennsylvania’s parental consent law (minors do not need parental consent to see a doctor while pregnant, only to get an abortion), which theater assistant Tracey Wolfe (Rosie Perez) tells her can’t be avoided:

Sasha: Is it true that if you’re under 18 you need parental consent to see a doctor while pregnant?

Tracey: No, I don’t. There aren’t any. It’s the law. Tell me about your family. Who’s at home?

Sasha: Just me and my dad.

Tracey: And you don’t feel comfortable having this conversation with him?

Sasha: He lost his job last year. He’s…he’s kind of a mess. I don’t know what he’s gonna do if he finds out.

By the show’s end, we see Tracey sitting down with Sasha and her father during a musical montage, presumably to help Sasha inform him of the pregnancy and ask for his consent for her to get an abortion. We’ll have to wait to see where this storyline goes, but based on the show’s history, I’m not holding my breath that the writers will have Sasha end up choosing life for her child.