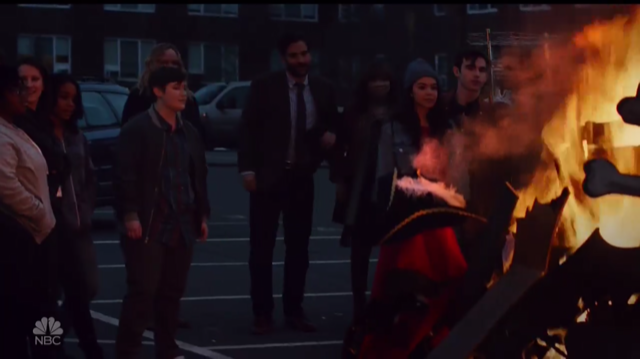 If you could take every liberal, Hollywood writer’s agenda and cram it all into one show, that show would be Rise, the new NBC drama about an English teacher who takes over his school’s theater program and decides to shake things up.

In Tuesday’s pilot episode, English teacher Lou Mazzuchelli (Josh Radner), more affectionately known as “Mr. Mazzu,” is seen as the all-knowing, brave, and inspiring teacher who courageously takes on the role of heading up Stanton High School’s theater program. He wants to “change things up. Make this program into something special,” so he decides the best way to do that is to have the teenage students perform the musical “Spring Awakening” instead of their regular musical “Grease.”

When a student later asks Mr. Mazzu why they can’t do ‘Grease,’ pointing out that it has “seven Tony nominations, a blockbuster movie and 2016 television revival. Is there a reason that’s not good enough for us?” Mazzu says, “I guess I just like this show more,” leading his assistant Tracy (Rosie Perez) to ask, “So which part did you like best? The abortion, teen suicide, or the incest?”

After auditions Mr. Mazzu ends up switching things up with casting, making the two usual leads take minor parts while choosing a different student, Lilette Suarez (Auli'i Cravalho), to play the lead of Wendla. He decides to recruit the school’s star football player, Robbie Thorne (Damon J. Gillespie), to play the other lead of Melchior, because he saw him performing a rap during a pep rally and recognized his talent. “Our Melchior and Wendla need to have real sexual tension,” Mazzu tells Tracy, believing that high schoolers Robbie and Lilette will have sexual chemistry.

As luck would have it, Robbie failed an English test, so Mazzu uses that to blackmail him into trying out for the part and getting his coach and father to agree to it. Otherwise he won’t be able to play football during Homecoming week. Later, Robbie ends up enjoying the role of Melchior so much that he defies his father, coach and the commitment he made to football to stand up for what he wants.

Later during rehearsals, it’s clear that there is “real sexual tension” between Robbie and Lilette, which makes Mr. Mazzu and his assistant share a satisfied smile.

Mr. Mazzu moves the other usual lead, Simon Saunders (Ted Sutherland), into the role of Hanschen, which upsets Simon because Hanschen has a love scene with another boy. Simon doesn’t feel comfortable playing such a role and doesn’t want to upset his Roman Catholic family. This causes Mr. Mazzu to believe that Simon is “carrying a real burden” in his family which he apologizes to him for.

Simon: Look, you cast me as the fifth lead, even though I have played a starring role in the last three productions, and I am literally the only guy who auditioned.

Simon: Oh, let's cut the crap. Melchior is the role, and--and I know you asked Robbie Thorne to audition for it. Hanschen is gay. He--he kisses a boy. I'm--I'm not gay.

Simon: Look, I come from a devout Catholic home. My sister has Down syndrome. My parents have dealt with too much as it is, and the last thing I'm gonna do is have them hear rumors about their son at church functions.

Mazzu: Well, it sounds like you're carrying a real burden in your family. I'm sorry.

Simon: I-it is not a burden. I love my family, and I will not embarrass them.

Mazzu: You know, Simon... I've been a teacher here 17 years. I've seen a lot of students come and go, and, uh... I tried to teach them the best I could, but the truth is... I've always felt really inconsequential to their lives, but now, with the show... I feel like this is my chance to get out from behind this desk and do something, you know, make an impact. And it's scary as hell, because there is a very real chance that I will fail very badly. Maybe this is scary for you, too, but I believe... that Hanschen is your role and that you are going to be amazing.

To help solve the problem of not having enough male actors for the musical, Maashous Evers (Rarmian Newton), who handles lighting for the school theater, asks Mr. Mazzu if he can show him something. They peer into the choir room where a group of girls are singing. “That girl second from the left-- that's Margaret Hallowell, one of the best voices at Stanton,” Maashous tells Mr. Mazzu. “Pretty soon, he'll be Michael Hallowell.”

“Is he comfortable with you telling me this?” Mazzu asks. “We spoke about it,” Maashous answers. “Anyway, I know we need guys for the show.”

Margaret/Michael ends up coming to auditions and Mr. Mazzu isn’t sure what name to use:

Mazzu: Okay, we have, uh, two new cast members to welcome. Uh, welcome back Jeremy, who did a wonderful job in his freshman year in the "Guys and Doll" chorus. Jeremy will be playing Ernst. And, um... what should we call you?

Mazzu: Beautiful. Michael will be joining us in the role of Moritz.

Simon later decides to rebel against what he knows is right and wrong in his church and family and brings up the play at the dinner table. Right after he and his family say grace, as his sister with Down Syndrome smiles innocently at the table, Simon tells his parents, “This is my role in the musical this year. It's not Danny Zuko, uh, so the good news is, you won't have to pray for me for playing a Lothario sex symbol. Um, the other news is that I'm playing a character that has a love scene, uh, with a boy, and... I want your blessing. So here it is--the script. Uh... The role is Hanschen. Look, the last thing I want to do is disappoint you guys, but I've thought about it, and I prayed about it, and I decided that this is something that I should bring to the world. I love you both.”

Wouldn’t Mr. Mazzu be proud if he could see that scene and what a difference his manipulation - I mean, words of “wisdom” - made for Simon.

Or better yet, this scene where Simon’s parents confront him about the musical, which leads to yet another instance of defying authority in keeping with the episode’s overall theme. Simon went from wanting to honor his family and being uncomfortable with acting out a homosexual love scene to now openly defying his parents.

Father: We read this.

Mother: Honey, your school should not be doing this material. It is absolutely inappropriate.

Father: We'd like you to step away from this.

Father: Simon, your mother and I have decided.

What about, “I’m part of a family and I can’t let them down?” How sad and tragic that a teacher with a political agenda can sway a child to pledge allegiance to his theater troupe over his own parents. Just wow.

Mr. Mazzu finally runs into a formidable opponent, however, that he can’t sway with his idealistic words and manipulation. The principal of Stanton reviewed the musical and is outraged. “I read this thing,” the principal says angrily. “Suicide, teen pregnancy, abortion, teenage sex, obscenities.”

Mr. Mazzu replies, “Yes, it deals with some mature material, but once people see it…” “People are not going to see it,” the principal interjects. “They will never see it, not at Stanton.” He puts Tracy back in charge and says the performance will instead be “The Pirates of Penzance.”

Just when Mr. Mazzu thought things were over, though, and that his dream of bringing “Spring Awakening” to the school had come to an end, he ends up being surprised, not only by the students, but by Tracy as well, who all protest the principal’s decision... by burning set pieces from “The Pirates of Penzance.”

Tracey: Stanton Drama has made a decision.

Robbie: And if I don't do the show, I don't play football.

Tracey: And we're all prepared to quit.

All: ♪ All will be forgiven ♪ I believe ♪ There is love in Heaven ♪ Peace and joy ♪ Be with them ♪ Harmony and wisdom ♪ I believe ♪ Oh, I believe. ♪