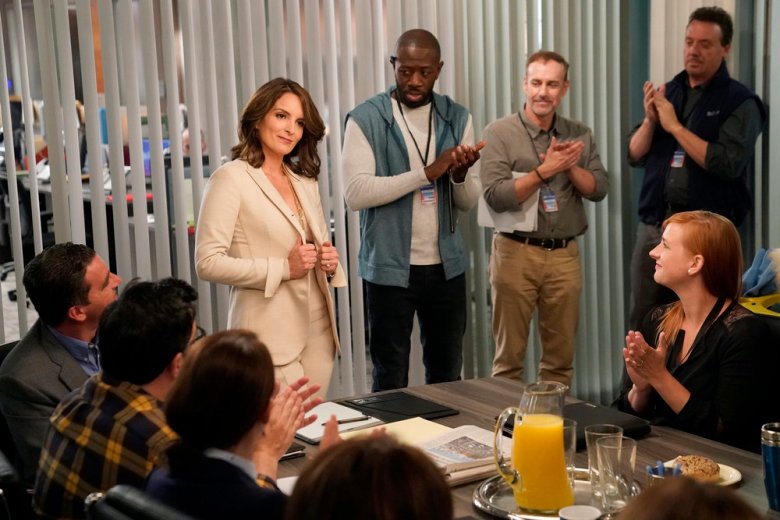 NBC’s Great News premiered its second season on Thursday, September 28, with an introduction of a new, main character, Diana St. Tropez (Tina Fey), head of the fictitious news program “The Breakdown” that the show centers around. The episode, titled “Boardroom Bitch,” also introduced a lot of politics along with Fey’s new character.

Diana has come to modernize “The Breakdown” and help raise ratings. I got the feeling from the start that this may be art imitating life, as Fey joining Great News most likely means that she’ll be bringing changes to the show to try to improve its ratings. And I was right.

Last season, the show didn’t get very political. But they made up for lost time in the season 2 premiere, touching on several controversial subjects and even taking a jab at the left (but never as much as the right, of course).

Diana is a tough, demanding feminist who has four babies, all the same age. As she explains, “Different donor fathers, all carried by surrogates and born on international flights so that they're citizens of the sky. It's advantageous for tax reasons.”

She believes that, “[Age] 30 is for working, 50 is for having kids, and 140 is for dying,” and has authored several books, including the inspiration for the episode’s title, “Boardroom Bitch.” Here's how she describes herself:

“I am the only female Fortune 500 CEO from a non-shapeware-related company. I sleep two hours a night. I'm never not doing Kegels. And my forte is rebranding struggling companies. And now I, Diana St. Tropez, am here to bring ‘The Breakdown’ into the 21st century.”

For the second time this season, Hollywood has poked fun at Hillary Clinton’s loss, but in this case, the joke came from the show’s older, politically incorrect character, Carol (Andrea Martin) who Diana characterized as a “sexist, old-fashioned lunatic,” and who, near the end of the episode, believes that women should be paid less than men because of their periods:

Katie: Oh, I can't believe Diana's our boss. Her life is everything that I want.

Katie: No. That's what you want for me.

Portia: I think I met Diana at an Illuminati meeting. I mean... Burger King.

Katie: I just want to make a good impression. I've read all of her books.

Beth: Oh, that's like me and Shakespeare. Have you read Rick Shakespeare? He writes nasty, funny erotica.

Katie: She's so smart. Listen to this. "Women need to listen like a man. "Don't nod or give encouragement, "And when you do speak, never turn a statement into a question." I'm pretty sure I don't do that? Damn it?

Carol: She seems shrill and annoying!

Katie: Shrill and annoying? Mom, you know why you think that? Internalized sexism. Older women can't stand seeing a strong woman succeed. It's why Hillary lost the election.

Carol: No, Hillary lost the election because she sent an email to her server at Benihana.

Despite the source, it seems that Hollywood may actually be turning on their beloved Queen Hillary. One can only hope!

With “America on the verge of eating itself alive,” as Diana puts it, she says that “people are finally watching cable news again,” and she plans to have “a bunch of lunatics screaming at each other” in the first news segment she produces because she believes that’s what the American people want to see.

The segment pretty much makes fun of all sides, with guests that include a racist “Obama denier,” a “trans-racial fracking misunderstander” (clearly a dig at Rachel Dolezal), a “wiccan priestess” who directed a documentary entitled, “I Hate the Troops,” and a dog groomer who “used a religious liberty law to refuse service to a gay dog.” Oh, and the gay dog himself, Rex.

As you can imagine, it gets pretty ridiculous:

Chuck: And on our panel today, we have Obama denier and author of the book "Well, I Never Met Him," Alan Jarvis. Trans-racial fracking misunderstander Sally Rosenberg, Wiccan priestess and director of the documentary "I Hate the Troops," Imani Fokolo, Ken Simpson, a Kentucky dog groomer who used a religious liberty law to refuse service to a gay dog. And Rex, a gay dog. Welcome to the program.

Portia: Now, I want to begin with a topic I think we can all agree on: Racism.

Ken: Racism doesn't exist. We had a black president.

Imani: I feel like I speak for all African-American women when I say we need to sacrifice more goats.

Sally: You don't speak for this African-American woman.

Portia: Now, Rex, I have to imagine you have something to say about animal sacrifice as a homosexual dog who also served in the military.

Chuck: All right, but what about—

Alan: Well, you're gonna have to prove that!

Alan: Well, good luck! I've never seen a naked woman before! I don't even know what one looks like!

Portia: You felt a little female to me.

Katie: Is Chuck okay? He looks like he's gonna throw up.

Greg: Who cares? This is great television.

Chuck: Come on, Chuck. Get in the game. Say something. Now. One, two, three, now! One, two--now! Say it! No! Just say something, you stupid bastard! Show me the facts on that!

Carol: The show's over, Chuck. You did really bad.

It turns out the show was a hit because yelling is “the mood of the nation,” according to Diana. Anchorman Chuck, who prefers things the way they used to be, starts to have his own personal breakdown. Though the show appears to be promoting climate change with his dialogue, it does mock environmental and evolution extremists with his wild, crazy fears about the ice caps melting leading to the death of fish and the creation of a whole new sea creature that can walk on feet and chase him.

Instead of helping him, the women quote Diana's book, "If he's male, let him fail." Followed by an unfortunate, racist and sexist crack at white males from anchorwoman Portia (Nicole Richie) that goes after the Senate Majority Leader, "Usually when I see a white man struggling, it makes me feel hopeful, like that time I saw Mitch McConnell eating a sub and the meatball fell onto his crotch."

"Let him fail" AKA easiest way to topple the patriarchy. #GreatNews

Chuck finally finds his bearings when the opportunity to rant about why change is bad comes up in the next segment of “The Breakdown,” and ends up dropping the mic, figuratively, with his last line:

Alan: A picture of the ocean and a pair of floating sunglasses?

Alan: I do see color, but I wish I didn't! They're all butt-ugly! That dog needs to go to conversion obedience school!

Portia: Uh, you know what? Why don't we transition to another hot topic this week: Why change is bad.

Portia: Chuck, care to comment on why change is bad?

Chuck: Uh, yes. Yes, change is bad. Things were just fine the way they were! Like the news! The news didn't make you feel angry. It made you feel safe.

Alan: Yeah, depending on who you watched.

Chuck: And the only men with beards were bums or Santa Clauses. Oh, and the ocean was so full of fish, you could just reach in and grab one, like a bear! And the guys who were wearing dresses were funny, not brave.

Greg: Man, this is good TV! Gotta hand it to Diana. She knows what she's doing.

But does Diana (or Fey) actually know what she’s doing? Despite Chuck’s hilarious crack on men in dresses, I kind of liked the show better last season when it didn’t get too political. Even though jabs were made at all sides, having a racist character say he sees color but wishes he didn’t because “they’re all butt-ugly,” wasn’t humorous in the least. It was funny seeing extreme versions of various political characters up until that line.

We’ll have to wait and see how the rest of the season goes, and how the real ratings fare with Fey on board. I am slightly hopeful since the mocking included the left, at least a little. We’ll see if it continues that way or if this was the typical, “pretend to be unbiased to sucker viewers in on the first episode and then let loose on the right the rest of the season” ploy.