'Will & Grace' Embarrasses Itself With Pathetic Trump Jokes, Abhorrent Shot at Reagan's Alzheimer's 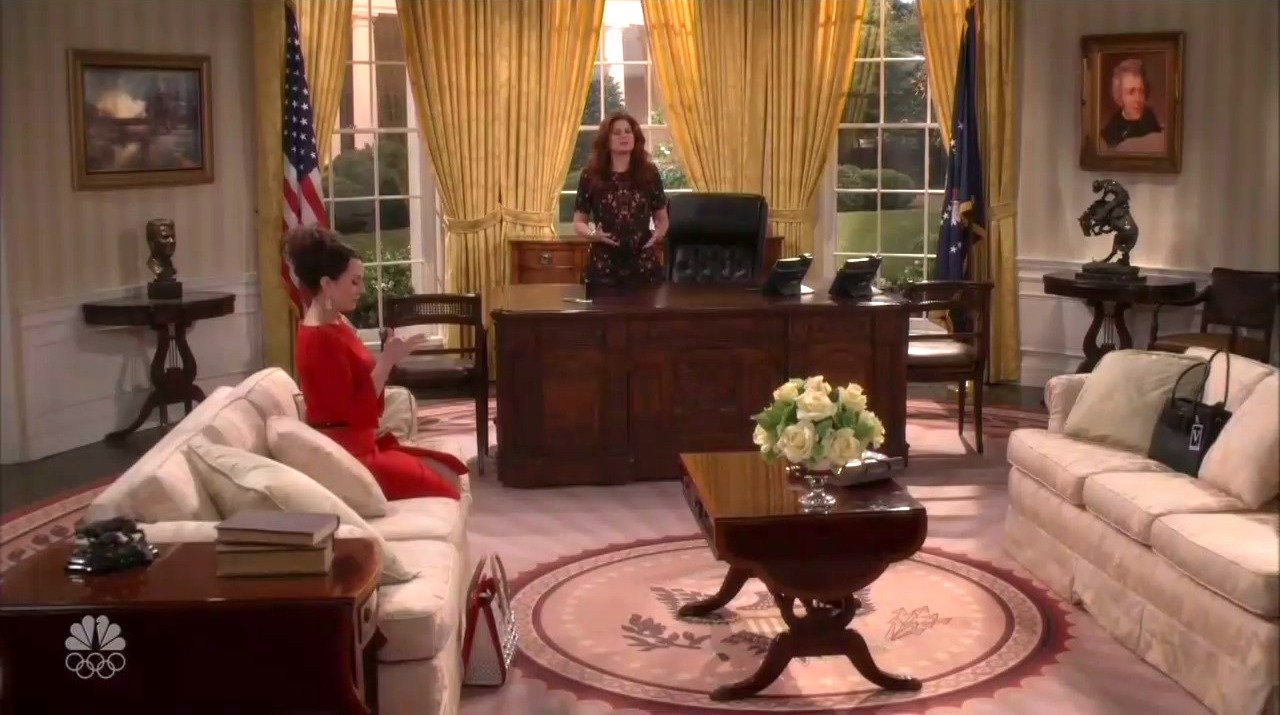 Will & Grace returned to television after an 11-year hiatus September 28 to ruin the good memories some of us had of watching Will & Grace in the past. The episode, "11 Years Later," took three minutes to catch us up on what we missed in the intervening years, then dove right into politics. It didn't let up in the entire episode, which was written around a trip to Washington, D.C. as an excuse to rant about politics without the writers having to be clever.

Will (Eric McCormack) heads to Washington, D.C. to attend an event where fictional Senator Steve Sandoval is speaking because, despite environmental policies he finds abhorrent, he is incredibly attracted to the Senator. In the meantime, Grace's (Debra Messing) assistant Karen (Megan Mullally) gets her a job redecorating the Oval Office by asking her close friend Melania Trump. resident Trump's only request? “He wants it to look like he's there from time to time.” Yes, the jokes were that lame and predictable.

Some of the jokes, like saying President Abraham Lincoln was gay (“You wanna hook up with a power gay. It's called an 'Anderson Cooper.' It used to be called an 'Elton John,' and before that, an 'Abraham Lincoln,'" Jack snarks) and making fun of middle America (Will observes, “Look, there's the vegetable garden where Michelle Obama introduced broccoli to the Midwest.”) were a bit below the belt, but they took a shot making fun of President Ronald Reagan's Alzheimer's that went beyond the pale.

Karen: The first time I was in this office, Nancy and I were chasing Ronnie around that desk... Trying to get some protein into the ol' Gipper. We used to put a scoop of tuna fish in an ice cream cone and tell him it was mint chip.
Grace: Karen, hand me that curtain swatch. I need to make sure it works with his coloring. Yup, that's the one.
Karen: Ah.
Sandoval: Paige, please give Mr. Truman here a tour of the West Wing.
Paige: Oh, Congressman, before I give anyone a tour of the West Wing, there is a security protocol that I have to-- what the hell? Rules don't mean anything in this place anymore. I'll go get your credentials.

Obviously, a lot of shows are happy to display the left-wing politics of their cast, writers, and others involved, but they usually manage to do so in a way that is slightly clever. A pointed comment, a witty joke. Writing the storyline around being at Trump's White House is just a lazy way to take shots at the president for the entire length of the show.

Paige: We'll start in the Oval Office, But you should know, the owner's got someone in there redecorating.
Will: "The owner"?
Paige: There's a lot of new words they want us to use. Follow me.
Will:  Hmm...redecorating for this president? What desperate fool would take that job? It's just gonna be redone in a year.
Secret Service Agent: Actually, you could say my job's gotten a lot easier. The nutjobs that we protected the last president from are this guy's biggest supporters.

I run the risk of being repetitive, but have you ever seen such lazy dialogue? They aren't even trying to have a plot.

The left is obsessed with the idea that Trump is going to be impeached while also obsessed with grieving the loss of the wife of the last president who was impeached. Awkward. As for whose supporters are more dangerous, only the Secret Service and law enforcement know for sure, but Rep. Steve Scalise just got out of the hospital today after nearly dying when a nutjob opened fire on Republican congressmen practicing for a charity baseball game back in June. Then again, the media blamed Republicans for that, too.

In the end, the only thing Grace does is leave a red hat in the Oval Office that says "Make America Gay Again" with an equal sign. Has this show forgotten that Trump is the first president to be elected while supporting gay marriage?

But it would have been shocking if this show wasn't political, considering those involved. Back in September 2016, the cast got together to make a video supporting Hillary Clinton. Since Trump won, Debra Messing has completely gone off the rails. Eric McCormack openly said, “We’re going to be as progressive and offensive as we can be. If we don’t offend somebody with every show, we’re probably getting a little safe," with Debra Messing adding that “political commentary is built in the DNA of Will and Grace."

Hollywood still hasn't realized that shows like this do nothing but help Donald Trump. When will Hollywood learn that they're basically running his reelection campaign by doing this? I got the sense they wrote a bunch of political jokes, then made up a loose plot to string them together, rather than writing a plot and adding in jokes where they fit. I knew this show was going to be incredibly political, but I thought it might still be clever. This was just embarrassing.