‘Will & Grace’ Return to Convince You to Vote for Hillary

It’s been a decade since their show’s last run, but the cast members of Will & Grace reunited this month for a very special purpose – to record a thinly veiled pro-Clinton propaganda episode called #VoteHoney.

In an interview with Entertainment Weekly, Megan Mullally, who plays Karen, the “boozy, busty socialite friend of Trump,” shed some light on the reason for the reunion. “Will & Grace was always a very topical show… It was the right time to [come back together] right before the first debate.”

Asked whether the episode which lampoons Trump supporters could change the campaign, Mullally answered: “I wouldn’t presume to think that we’re going to, like, change voters’ minds, but I think it’s … also a moment to think about what’s happening in the election and to just vote. I’m hoping that it’s all coming to a tipping point, I guess. Isn’t that sort of what happened with gay marriage?”

The actress is spot on; Will & Grace is often credited with changing the American public’s minds about the gay lifestyle, which directly led to the Obergefell v. Hodges ruling in 2015. Considering how entertainment media has paved the way for a Clinton presidency and over 20 TV shows have attacked Trump, the #VoteHoney episode may have more power to influence than Mullally realizes.

Released on September 26, the nearly ten minute segment begins with Will’s exclamation: “This just sucks. Can you believe this is the world we live in? …how is it possible that Donald Trump is a nominee for president of the United States?” After commiseration from Grace (played by outspoken Hillary supporter Debra Messing) Will continues: “I can’t even talk to somebody if I know they are going to vote for him.” 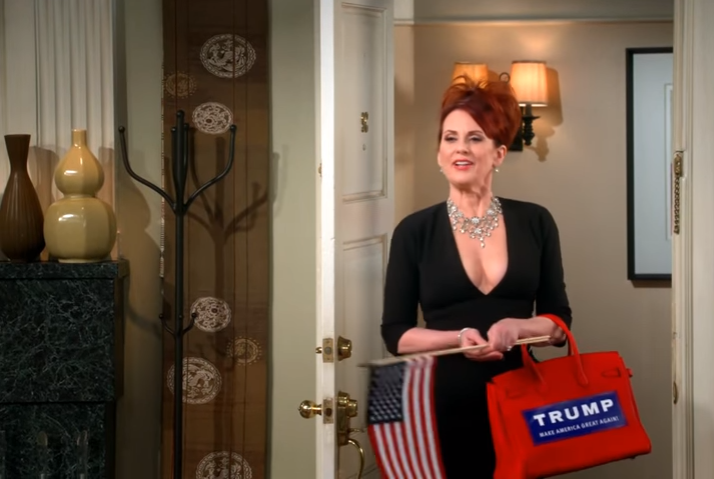 “We just had such a fun weekend with Donald and Melania,” she enthuses about her Mar-a-Lago trip. “You know it really is one of the most beautiful places on earth: the azure blue of the sea, the verdant green of the golf course, the mahogany brown of the staff.”

“Please tell me you are not voting for that guy?” Will asks incredulously. “All he does is call people names!”

After discussing the wall that Karen built to keep her Mexican maid Rosario from the main house, Grace says: “Will, don’t waste your energy on her. It’s all going to come down to undecided voters in Pennsylvania anyway.”

“Right, right, the unemployed, uneducated angry white man,” Will responds. “Do we even know anyone like that?”

Soon after, white, unemployed Jack enters and Grace asks: “You’re voting for Hillary, right?” Although Jack expresses frustration at being “pigeonholed” because “not all gays think alike,” Karen says: “Oh, honey, I knew you were one of those weird fags that was on the Trump train!”

It turns out, Jack is just undecided. Karen tries to convince him one way, declaring: “If you don’t vote for Trumpy, there’ll be wars, monsoons, locusts and hordes of brown people pouring over our borders from every direction. I mean it’s one thing if you’re sitting in the audience at Hamilton, but do you really want to see those people everywhere?” 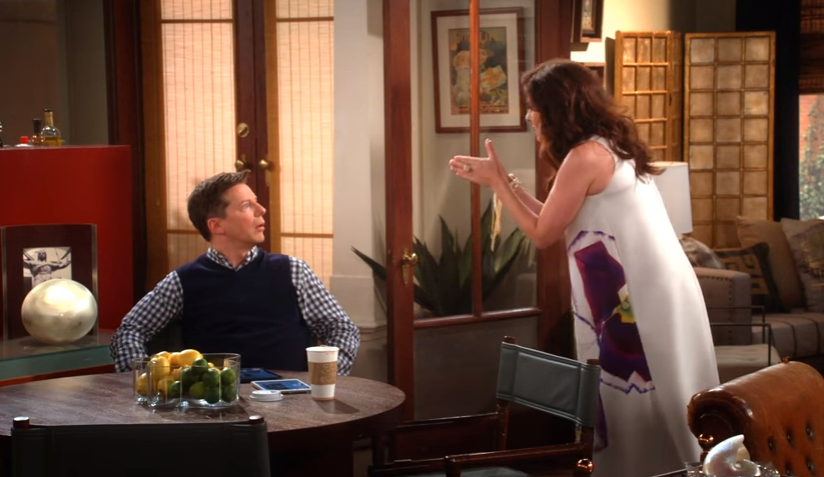 Grace then delivers this dramatic, feminist panegyric: “When I was a little girl, I didn’t think that I could ever be president, and do know why that was? …Because no woman had ever been president of these United States and I can think of no greater message to send to millions of little girls and little boys who are going to be little girls and little girls that are going to be little boys that if you work hard and dedicate yourself to serving others, that one day you too could hold the highest office in this great nation. If you help elect Hillary Rodham Clinton, you, just you, will be a part of the America that finally shattered that glass ceiling.”

Eventually, Jack chooses Clinton because of one very important reason: singer Katy Perry supports her too.

Although it’s ridiculous, the segment is a keen reflection on our culture and a savvy way to attract more Clinton votes. The left certainly knows how to leverage entertainment media.