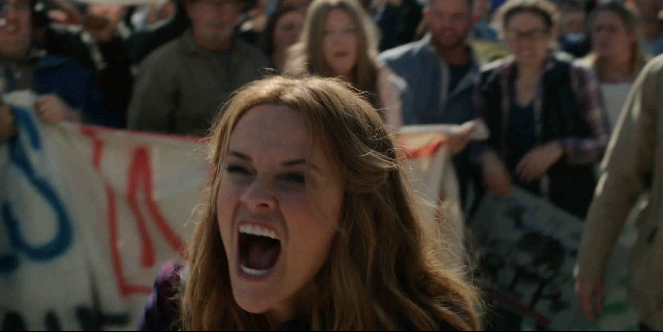 Apple TV+'s flagship series, The Morning Show, was inspired by a book by CNN's Brian Stelter. It shows. Clearly meant to be prestige television in the mold of HBO, the series is more preachy, self-indulgent Newsroom than juicy, story-driven Big Little Lies. The first three episodes of a 10-episode season were released with the premiere of Apple TV+ on November 1.

The Morning Show stars Steve Carell as Mitch Kessler, a Matt Lauer/Charlie Rose-type morning tv anchor caught up in a #MeToo scandal, Jennifer Aniston as Alex Levy, Kessler’s co-anchor who is trying to seize control of the show while the network attempts to push her out in his absence, and Reese Witherspoon as Bradley Jackson, a feisty up and coming reporter on a local network who ends up in Kessler’s seat by the end of the first three episodes.

The improbable story of Bradley’s journey to co-anchor began with –- what else –- a liberal spiel, in episode one, “In the Dark Night of the Soul It's Always 3:30 in the Morning.”

Bradley, who supposedly worked at a conservative station, was about to interview people on both sides of a protest at a local coal mine when a scuffle erupted, her camera man was knocked to the ground and she’s called a “fake news bitch.” Her outrage against the presumably pro-coal protester at fault inspired an anti-coal rant that had the mine protester she’s supposed to impartially interview nodding (click “expand”):

Alan: Okay, Bradley, this is Jenna McIntire -- she's protesting mines. This is Bob Stephens. His family's been in the mining business for generations.

Bradley: All right. I got it. I'm gonna need a wide shot, okay? And then we'll go on three and two, one. Hey! You okay, Joe? Hey! What are you doing?

Bradley: What did you fucking call me?

Man: Called you a fake news bitch is what I called you.

Bradley: Oh, yeah? I'm fake news? What's the real news then? You tell me five facts about coal, and I'll let you go.

Man: I don't have to tell you shit, lady.

Bradley: You knocked down my cameraman. Otherwise I'm gonna have you arrested for assault. I bet you don't know jack shit about coal. You're just out here trying to raise some hell. Go! Tell me!

Man: Coal is a cheap fuel.

Bradley: [IMITATES BUZZER.] Wrong! What else?

Man: I don't know. It's easy to get for people.

Bradley: Wrong! What else?

Bradley: It makes jobs for everybody. Everyone's happy.

Bradley: Yeah, so does death, okay? You think that's a good idea?

Bradley: If it's so positive, why do you think all these people are out here protesting?

Man: I don't know. Because they think it's dangerous

Bradley: Do you think it's dangerous? Do you even know what's in coal ash? Arsenic, copper, lead, mercury, uranium. That is some toxic shit. And what about jobs? How many jobs have been lost in the last ten years?

Bradley: Huh? Thousands! Thousands of fucking families knocked on their asses. And it's just a big wheel that goes around. Liberals add sanctions. Conservatives remove those sanctions. And they just keep fighting 'cause all they wanna do is hear themselves talk. And they all want to be right. And they all wanna win. And that's all they fucking care about. And there's a human cost! And it's exhausting! I'm exhausted!

Bradley: Get off me. Don't knock over old men.

Bradley’s outburst went viral and got national attention, landing her a segment on The Morning Show with a skeptical Alex who thought Bradley knew she was being recorded and was performing for the cameras. During the interview, Bradley explained, “As reporters, we see the way the world works and sometimes you just want to get in there and educate people and stop them from constantly going in circles with their ideas. I mean, it’s just so frustrating. It’s sad … I think America is tired of Twitter fighting. It’s ignorant, and it’s contributing to the dumbing down of our country.” This is an arrogant view of journalists educating a dumbed down country just going in circles that seems pretty true to what they think in real life.

In episode three, “Chaos Is the New Cocaine,” Alex found out the network was trying to push her out so she impulsively took the occasion of an award acceptance speech to spontaneously announce that Bradley will be her new co-anchor. Afterwards, she explained her actions to her daughter as feminism, “Sometimes women can’t ask for control, so they have to take it.”

Alex was read the riot act by the network heads for her co-anchor stunt but remains defiant, ranting about power and male privilege:

Alex: Are you done?

Alex: The part you guys never seem to realize is that you don't have the power anymore. The news division is held up by my show. And the only thing keeping us afloat is me. Because guess what? America loves me. And therefore, I own America. It seems pretty fucking simple, but so easy for you guys to forget.

Fred: Are you actually trying to justify your action -

Alex: You're not listening! I don't need to justify anything. You all are so convinced that you are the rightful owner of all of the power that it doesn't even occur to you that someone else could be in the driver's seat. And so, we have to just gingerly step around your male egos in order to not burst this precious little bubble - Well, surprise! - I'm bursting it. We are doing this my way. Because, frankly, I've let you bozos handle this long enough.

A show that lets female journalists speak truth to power in the form of conservative white males, Stelter must be so proud.

"The Morning Show" is released weekly on Fridays on Apple TV+.