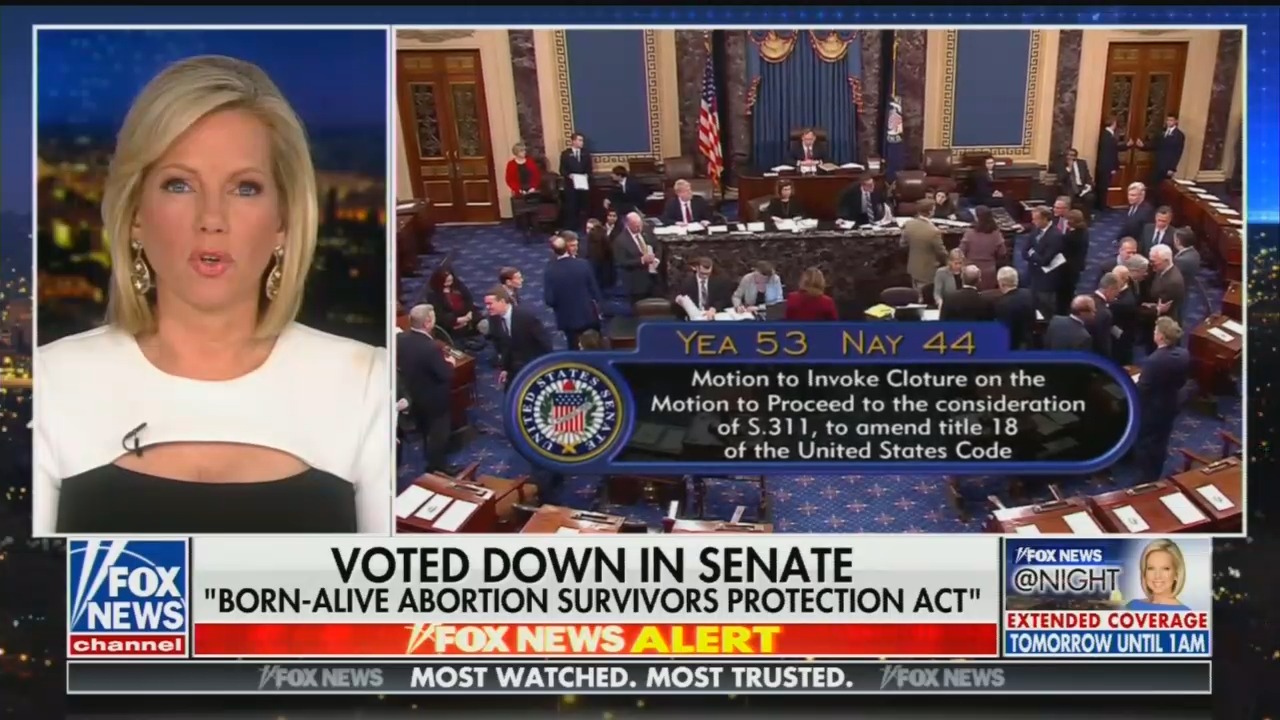 The good thing about the Born-Alive Abortion Survivors Protection Act is that it is very straightforward, there’s little wiggle room for the media’s typical machinations and euphemisms when it comes to abortion. They have to be honest about what the bill is and what it does, which is why they try to take the focus off the part about newborns being left to die and make the story about President Trump and Republicans.

On Monday night after the vote failed, Trump tweeted, “Senate Democrats just voted against legislation to prevent the killing of newborn infant children. The Democrat position on abortion is now so extreme that they don’t mind executing babies AFTER birth.... This will be remembered as one of the most shocking votes in the history of Congress. If there is one thing we should all agree on, it’s protecting the lives of innocent babies.”

Because “Orange man bad,” the UK Independent’s Indy 100 knocked Trump’s comments as a “bizarre Twitter rant” and lectured, “of course, the vote was for no such thing.” They ran interference, parroting the pro-abortion talking point that “it is still an extremely small number of abortions, less than 1 per cent, which are classed as late term,” which conveniently glosses over the fact that when you are dealing with large numbers, like almost a million abortions per year, 1 percent of that total is actually a lot – that means that on average, over 9,000 babies are aborted late term yearly, that’s about 25 per day! (And anyway, isn't it the left that's always saying "If it saves just one life ..."?)

The expert in question was Mary Ziegler, described as a professor at Florida State University's College of Law who “specializes in the legal history of reproduction and the Constitution.” After quoting Trump’s Tweet, Newsweek said Ziegler “disagreed, however, arguing that the bill had more to do with ‘Republican and potentially pro-life strategy more than anything else.’" She said the bill was "more a matter of political framing than substance" that pro-lifers in Congress were trying to “exploit” and see as “a political gift.”

"So, my understanding is that the concern is not that abortion rights supporters don't approve of providing care to children born after abortions necessarily, but they don't think the language is clear enough about what physicians would need to do to [meet the standard of care] and they think that would expose doctors who are not doing anything wrong to criminal liability."

In total, Newsweek spent 12 paragraphs out of 20 letting her say her piece, then gave another 5 to Jonathan Lord, co-chair of the British Society of Abortion Care Providers and consultant gynecologist at the Royal Cornwall Hospital/University of Exeter Medical School in Truro, England. The Brit was allowed to give his opinion that "newborn babies are already protected under current law," because apparently they thought it more valuable to record a foreigner’s interpretation of U.S. law than to contact an American pro-life expert for a quote. The remaining three paragraphs just gave the details on the vote and quoted Trump’s tweets.

Politico similarly made the story all about the politics in "Senate defeats anti-abortion bill, as GOP tries to jam Dems." Calling the vote “part of a Republican effort to squeeze Democrats ahead of the 2020 campaign,” reporter Alice Miranda Ollstein fretted, “Ahead of the vote, the bill’s Republican sponsors and outside anti-abortion groups lobbying for its passage made it clear that the intent of Monday’s vote was to undermine the growing pool of Senate Democrats running for president.”

Instead of denigrating only Republicans, Yahoo! News took a “pox on both your houses” stance: “The vote, and the debate that preceded it, was a textbook case of how polarized the two parties have become on the issues of abortion and women’s rights.” This is the best we can expect from a mainsteam media that won't admit protecting babies born alive after abortion shouldn’t be partisan or even controversial.

Hogue tweeted, “The media is culpable with headlines like this one from the @washingtonpost ‘Senate blocks bill on medical care for children born alive after attempted abortion’ which would require about 20 minutes of googling to understand how misinformed that frame is.” Actually, the WaPo article she referenced was a surprisingly even handed report which is why it's not included in this round up. I doubt they'll make that mistake again.