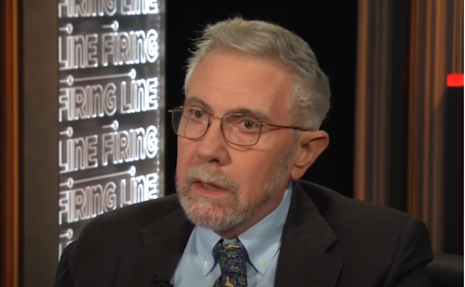 The same Krugman who wrongly claimed in 2016 that former President Donald Trump’s election would lead to “'a global recession, with no end in sight,'” wrote a new op-ed headlined: “The Bad Economics of Fossil Fuel Defenders.”

He peddled nonsense: “[C]laims that taking on climate change would be an economic disaster are as much at odds with the evidence as claims that the climate isn’t changing.” Too bad for Krugman that Transversal Consulting President Ellen Wald Ph.D. reportedly told Axios that President Joe Biden’s climate agenda has kept “‘American [oil] production down.”

Biden’s actions enabled an economic crisis by allowing the Organization of the Petroleum Exporting Countries (OPEC) to gain “more leverage over U.S. gas prices, especially Saudi Arabia.” Biden all but begged OPEC to produce more oil while U.S. production remains stagnant. A climate agenda that hamstrings the U.S. economy by subjecting it to foreign oil cartel manipulation was clearly lost on Krugman.

Krugman railed against the imaginative “inconsistency between conservatives’ expressed faith in the power of private initiative and their assertion that climate policies will paralyze the economy.” He tried to argue regulations don’t hurt innovation: “Businesses, the right likes to tell us, are engines of innovation and adaptation, rising to meet any challenge. Yet somehow the same people who laud private-sector creativity insist that businesses will shrivel up and die if confronted with new regulations or emission fees.” Krugman’s logic is like telling someone to find an innovative way to breathe while being choked out. The U.S. Chamber of Commerce Foundation noted in 2017 that “federal regulations and their infrastructure are growing and have a disproportionate impact on small business and free enterprise in America.”

National Review Senior Writer David Harsanyi slapped down eco-activists who argue that “going green would be an economic plus.” Harsanyi questioned what a “complete weaning” from fossil fuels would do to the economy if the slightly higher prices Biden is trying to mitigate are already “threaten[ing] the world’s economic health.” Harsanyi said that Biden’s “‘net-zero emissions’” plan is in effect “a fantastical, not to mention suicidal, goal.”

Krugman even pivoted off the climate issue to launch an off-topic, fallacious argument that the U.S. economy does better under Democratic presidents than Republican presidents. Manhattan Institute Senior Fellow Brian Riedl recently excoriated a similar notion as “partisan nonsense” and the byproduct of an “ideological cocoon.”

Conservatives are under attack. Contact The New York Times at 800-698-4637 and demand it distance itself from Krugman’s eco-fanaticism.