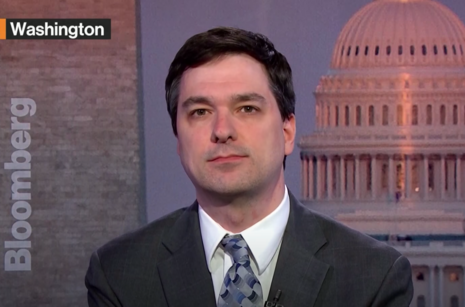 New York Times senior writer David Leonhardt had written that Democratic administrations have been more “pragmatic” by being “willing to heed economic and historical lessons about what policies actually strengthen the economy, while Republicans have often clung to theories that they want to believe — like the supposedly magical power of tax cuts and deregulation.”

Economist and Manhattan Institute Senior Fellow Brian Riedl rebuked Leonhardt and the media for living in an “ideological cocoon” and pushing talking points on behalf of Democrats. “This is just partisan nonsense,” Riedl said of Leonhardt in an exclusive interview with the Media Research Center.

Riedl took a number of shots at the media for misrepresenting data to their readers and viewers to prop up liberal economic policies:

The issue is that many columnists and reporters are quite liberal. Many of them do not have a strong background in economics either, so they radically oversimplify complicated issues, reach out to experts within their own partisan echo chamber, and then come to believe that this ideological cocoon reflects the actual consensus of the field.

In his critique of Leonhardt, Riedl stated: “The pro-growth impacts of the right kinds of tax cuts and deregulations are well-documented, and Democratic stimulus approaches such as those in 2009 resulted in the economy recovering much more slowly than had been projected even by the Obama White House and CBO (worse than even their ‘zero-stimulus’ economic projections).”

Riedl’s recent study on the question of whether Democratic administrations and their policies are better than Republicans on the economy undercuts the media narrative. Riedl told the MRC that analyses like Leonhardt’s “ignore that the natural business cycle is more determinative of economic performance than the President (or Congress). Presidential terms that begin during an economic boom are more likely to see a recession, and presidential terms that begin during a recession are more likely to see a recovery and boom.”

In addition, Riedl stated that journalists are also ignoring “the fact that Republican and Democratic presidents have generally inherited economies trending in opposite directions.” Leonhardt’s narrative, not much unlike the narrative pushed by other journalists, Riedl stated, “[is] using very superficial analysis.”

Riedl summarized his core findings to the MRC:

Over the past 37 years, we have elected (and re-elected) Republican presidents during booms (1984, 1988, 2000, 2004, 2016), and replaced them with Democrats during recessions (1992, 2008, 2020, plus their re-elections). If we keep electing Republicans during booms, then by definition they will be in office whenever the boom ends. And if we keep electing Democrats during recessions, then they will get credit for any natural recovery that would have occurred regardless of their policies, [emphasis added].

Riedl stated that the job numbers over the past decades reflect his thesis. Specifically, he stated that “[s]ince 1977, there have been 11 presidential four-year terms. Six of them began with a weak economy in which the unemployment rate was between 7.3 and 8.0 percent – and those terms saw an average of 7.6 million new jobs created.” Riedl said “the other five terms began with an unemployment rate between 4.2 and 5.4 percent – and created an average of just 1.2 million jobs.”

In Riedl’s estimation, “when the unemployment rate is high, the economy should naturally recover and move the unemployed back into jobs. When the economy is at full employment, you’ve basically run out of unemployed people to move into jobs, and the economy will likely begin decelerating too.” Riedl then asked: “What does this have to do with parties?” [Emphasis added.]

Leonhardt has not been the only one to advocate on behalf of the Democrats, however. MarketWatch recently ran an op-ed, found on The Conversation, written by Texas State University Associate Professor of Finance and Economics William Chittenden. MarketWatch slapped a new, pro-Democratic Party headline on it: “The economy — and the stock market — tends to do better under Democrats.” The Balance wrote in October 2020 that “Some research shows that economic growth is better under Democrats.” A guest said on CBS News affiliate WWL-TV in September 2020 that “Democrats are leading the race with both GDP and the stock market.”

Riedl pivoted off of The Post story to summarize the state of the U.S. media in today’s politics:

[N]ewsrooms are plagued with groupthink in which liberal narratives (and anti-conservative narratives) are regularly woven out of the news. Some of this is subconscious – the lack of conservative voices leaves many reporters not realizing that their ‘everybody knows’ narrative reflects more liberal caricature than reality.

Conservatives are under attack. Contact ABC News (818-460-7477), CBS News (212-975-3247) and NBC News (212- 664-6192) and demand they report the truth about the business cycle and correct the false narrative being circulated by media that Democratic presidents are better than Republican presidents on the economy.