WATCH: President Trump Assures US That ‘We’re Not Shutting Down’ Economy Again 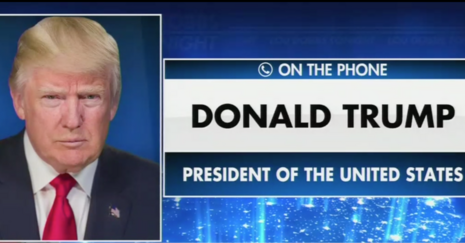 The Lou Dobbs Tonight host told Trump via phone call Tuesday that “we have seen — now — new voices arise, saying to you that, ‘Mr. President, you should shut down the economy again.’” Dobbs then nuked Minneapolis Federal Reserve Bank President Neel Kashkari for recently suggesting on CBS’s Face the Nation that the economy should go under a national lockdown for four to six weeks. “I don’t know where the Federal Reserve gets these people,” Dobbs said. To the question of an economic lockdown, Trump swatted that idea down: “We're not shutting down.”

Trump was sure to say that “we did the right thing” in closing down initially, following the Chinese government’s failure to stop the virus “from coming in.” However, the president expressed optimism on a V-shaped recovery as states begin to open up their economies:

Dobbs proceeded to hammer the point about the need to reopen the economy. According to Dobbs,  “Anthony Fauci, your, one of your doctors on the task force, saying that — finally acknowledging very clearly and somewhat loudly that you saved lives and a great number of American lives by shutting down travel from China.” Dobbs continued: “But speaking of Fauci, he is also acknowledging that schools — not all of them, but most schools — need to reopen. The economy needs to be reopened.”

Dobbs even said that “the secretary general of the United Nations is joining in to say, ‘Absolutely. Open up the economy,  put the kids in schools.’” Trump responded by saying that “We are opening the economy very rapidly. And frankly, some of the blue states — we wish they’d do it, and do it fast— we’re asking them to do it. But they like to keep it closed.” Trump then joked that the blue states will only open up after the November 3, elections:

It’ll probably open up on November 4th. You understand that. They’ll announce that they’re opening on November 4th. There’s a lot of politics involved in some of these states that are closed.

In May, economist Stephen Moore said that “Keeping our economy locked down is destroying our businesses, impoverishing our citizens and doing great damage to the health of the American people.” He continued: “We need to immediately find a way to open the economy safely and smartly. Not in the months to come. Not next week. We need to do so immediately.”

CBS Face the Nation recently failed to probe Minneapolis Federal Reserve President Neel Kashkari over his ridiculous proposal for a six-week national economic shutdown. Contact CBS’s Face the Nation at 202-457-4481 and demand they question Kashkari and provide pushback on his authoritarian policy proposal!