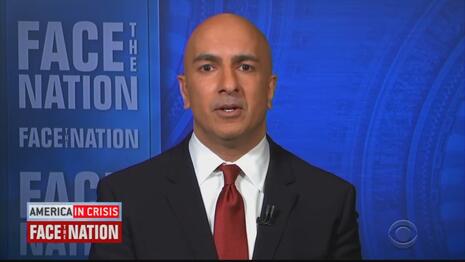 Filling in for Margaret Brennan on the show he used to helm, John Dickerson failed to push back on Minneapolis Federal Reserve Bank President Neel Kashkari’s proposal that the entire country go into a month-long national economic shutdown. GDP fell 9.5 percent in the second quarter, and at least “30 million” are unemployed, in-part due to the lockdowns and stay-at-home orders imposed by states. Apparently those factors weren’t significant enough for Dickerson to push back on a proposal for a national economic lockdown.

Dickerson told Kashkari that President Donald Trump “is not interested in locking things down again at all. In fact, he's pushing in the other direction.” Dickerson then left Kashkari with a leading question: “So, if that's not going to happen, does that hurt the economy more, and are there losses that you can’t recoup in a recovery that might happen during that period of time?”

Then came Kashkari's authoritarian suggestion that the entire U.S., with a 327 million-plus population, should lock down its economy for a month or six weeks.

KASHKARI: “For sure. I mean, if we were to lock down really hard, I know I hate to even suggest it. People will be frustrated by it. But if we were to lock down hard for a month or six weeks, we could get the case count down so that our testing and our contact tracing was actually enough to control it the way that it's happening in the Northeast right now.”

Dickerson never scrutinized Kashkari’s statement and instead pivoted to another question without getting Kashkari to defend this proposition. Radford University Associate Professor of Economics Thomas Duncan wrote in March that “If the economy does linger in its downturn, the human costs to the shutdown will inevitably begin to increase.” Duncan even said that the St. Louis Fed President and CEO James Bullard predicted “that unemployment may rise to as much as 30%” as a result of the shutdowns. "Bullard’s number is higher than the unemployment seen in the US during the Great Depression (25%)," Duncan said.

Economist Stephen Moore said in May that “[k]eeping our economy locked down is destroying our businesses, impoverishing our citizens and doing great damage to the health of the American people.”

During the July 23, edition of Varney & Co., host Stuart Varney questioned Nuveen chief equity strategist Bob Doll outright on whether the economic rebound would slow “because the cities remain locked down.” Doll responded by saying, “Absolutely agree with you Stuart. They’re big pockets of GDP. And therefore, if they’re not functioning, the economy won’t function. It’s exactly the reason why we think a V[-shaped recovery] is unlikely.”

Contact CBS’s Face the Nation at 202-457-4481 and demand it provide honest, objective reporting. CBS should further question Kashkari and provide pushback on his authoritarian policy proposal!