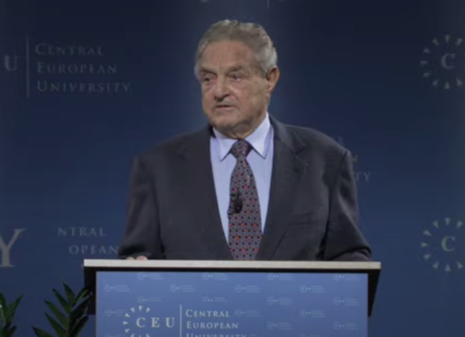 Liberal billionaire George Soros is pouring it on in a multimillion-dollar effort to help Democrats turn out their voters in the 2020 election.

The Associated Press reported that “A network of deep-pocketed progressive donors is launching a $59 million effort to encourage people of color to vote by mail in November.” AP continued: “A nonprofit arm of the donor network Way to Win is working with philanthropic organizations including the Ford Foundation and George Soros’ Open Society to raise the money.” As AP tells it, this is a “step many Democrats view as crucial to turning out the party’s base during the coronavirus pandemic.”

The Way to Win network had reportedly already spent $50 million this cycle, “which has largely gone to groups in battleground states including Michigan, North Carolina, Florida, Georgia and Arizona.”

Vice President of Way to Win Nicole Boucher said in a statement acquired by AP:

We need to meet the urgency of this moment ... we need everyone to keep their foot on the gas pedal ... We’re challenging others and our partners in the sector to help fill critical funding gaps for communities of color, who have long been under-resourced in philanthropy.

AP noted that Way to Win’s “aim is to fund organizations that already have a presence in [key battleground] communities to educate voters on ways they can cast a ballot.”

“By conducting broad outreach, Way to Win hopes to harness the energy that has been present in protests nationwide over racism and the killing of George Floyd by a Minneapolis police officer,” according to AP.

Way to Win is committed to building the power of our base: women, people of color, Indigenous people, LGBTQ+ people, and young people. This multiracial coalition is key to winning, and Republicans know it. Thus, they weaponize race to consolidate their power among white voters. Meanwhile, Democrats fall into the trap of focusing on "electability" — which is code for appealing to white swing voters. This language papers over an implicit bias and it covers over the untapped power of the Democratic base.

But this isn’t the only radical effort Soros has involved himself in this cycle.

Soros’s major left-wing 501(c)(4) group Fund for Policy Reform (FPR) has fueled his Democracy PAC with at least $35 million so far between January 7 and March 18, according to Federal Election Commission records. Democracy PAC is the only FEC-listed FPR recipient so far this election cycle for FPR contributions. FPR’s 2018 990 listed Soros as its Director/Chairman and Soros’s Open Society Foundations President Patrick Gaspard as its Ex Officio/president.