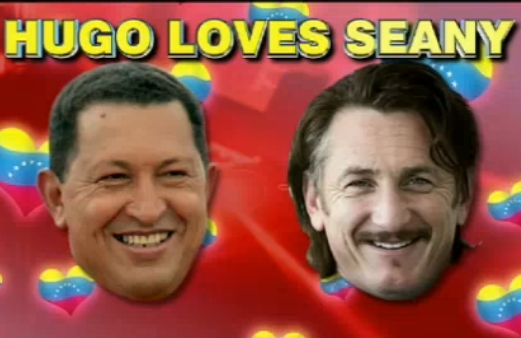 As NewsBusters has been reporting, Penn has made some bizarre comments recently which include wishing his critics would die screaming of rectal cancer and saying journalists should be jailed for calling Chavez a dictator.

This nuttiness was followed by Chavez thanking Penn for his support and Penn throwing the Washington Examiner's Tara Palmeri out of a Q&A session for asking him about his rectal cancer remark.

All this proved perfect comedic fodder for Gutfeld and Company who first invited Palmeri on to discuss Penn's bizarre behavior and then used Robot Theater to marvelously mock the love affair between these two strange bedfellows in a segment called "Hugo Loves Seany" (video embedded below the fold): 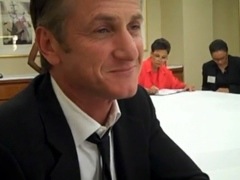 Is Sean Penn getting a bit too close with Venezuelan dictator (yes Sean, he is a dictator) Hugo Chavez? He seems to be taking a page from Chavez's book in dealing with the press.

A reporter for the Washington Examiner was kicked out of a question-and-answer session with Penn after asking him about recent controversial remarks Penn made about his critics. It seems that the actor and wannabe lefty commentator doesn't like being asked tough questions.

"I think that you are investing in a culture that I am not interested in. And you should go your way," Penn told Tara Palmeri, a reporter for the Examiner's "Yeas and Nays" column. (Video embedded below the fold).

Homicides Skyrocket in Venezuela, Chavez Thanks Penn for Support 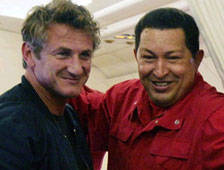 [E]very day, this elected leader is called a dictator here, and we just accept it! And accept it. And this is mainstream media, who should – truly, there should be a bar by which one goes to prison for these kinds of lies.

According to a report from the Associated Press, Chavez was pleased by this remark:

By Steven Crowder | March 10, 2010 2:55 PM EST
"You know, do I hope that those people die screaming of rectal cancer? Yeah, you know, but I’m not going to spend a lot of energy on it." – Sean Penn (when addressing his detractors)

No, I’m not making it up, you can even view the video here. O’Reilly, feel free to examine his body language, though to be fair, there isn’t much of a body to work with. For those too lazy to watch the video, let me recap it for you: **Spoiler alert!** Sean Penn has decided to take the life-plunge and go full-retard. Honestly, I don’t even know what to say anymore. Clearly, his statement was made in the poorest taste possible. Even more appalling however, is that the media doesn’t seem upset about these remarks in the slightest.

Is it just me, or do the “outrageous” quotes from Limbaugh, Coulter, and Beck that send the mainstream-media into a tizzy pale in comparison to the vitriolic hatred of Penn? 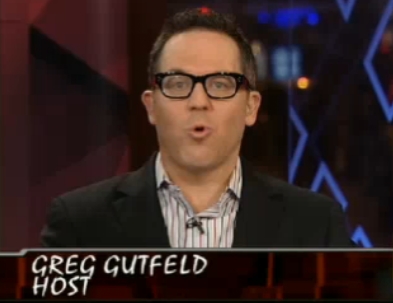 As NewsBusters previously reported, the so-called comedian during last Friday's "Real Time" said of the tragedy, "When we see crazy, senseless deaths like this, we can only ask why, why, why couldn't it have been Glenn Beck?"

This led Gutfeld, along with guests including Ann Coulter and S.E. Cupp, to lay into Maher for his absurdity while also skewering actor Sean Penn for recently wishing his critics would "die screaming of rectal colon cancer."

At the end of a discussion of Haiti on HBO’s Real Time with Bill Maher, actor Sean Penn went on a rant in defense of Venezuelan strongman Hugo Chavez, suggesting prison time for American journalists: "every day, this elected leader is called a dictator here, and we just accept it! And accept it. And this is mainstream media, who should – truly, there should be a bar by which one goes to prison for these kinds of lies."

This is a little strange, since a study by our Business and Media Institute of Chavez coverage from 1998 to 2006 found Chavez’s much-criticized human rights record was mentioned in only ten percent of stories, and he was described as a leftist in only 12 percent of stories. Maher shifted to Chavez and the end of the Haiti interview, asking Penn to make a case for his man Chavez:

I'm not sure which is worse: Sean Penn hoping his critics die screaming of rectal cancer, or CBS News's Lara Logan finding that funny.

As NewsBusters previously reported, CBSNews.com on Friday posted a preview of an interview to be broadcast on "Sunday Morning."

In it, Logan asked Penn, "Does it make you angry when people talk about, you know, 'Sean Penn, the Hollywood star, the movie star, coming in and trying to do something,' and they're kind of cynical about it?"

Penn arrogantly answered, "You know, do I hope that those people die screaming of rectal cancer? Yeah" (video embedded below the fold with transcript):

We cower as you point fingers telling us to “support our troops.” Well, you and the smarmy pundits in your pocket, those who bathe in the moisture of your soiled and bloodstained underwear, can take that noise and shove it.

"…[t]hose who bathe in the moisture of your soiled and bloodstained underwear"?

There just aren’t enough “WTFs” in the whole wide world…

Sean Penn Objects to Larry King's Suggestion He's Not a Fan of the U.S. Military

Leftist actor Sean Penn appeared on CNN’s Larry King Live on Monday night to discuss Haiti, and he tried hard not to talk big-picture politics. He was clearly panicked about Haiti. He compared it to the U.S. bombing of Hiroshima and claimed it's on "the verge of what might be the greatest public health crisis in the history of the Western Hemisphere." [Audio available here.]

But what struck Larry King was his kind words for the military:

PENN: We work in strong collaboration with the 82nd Airborne, who have been extraordinary. To see the United States military with all its skill and discipline and most importantly the quality of human beings that there are doing this when it's a human aid effort is unparalleled.

KING: You were so praiseworthy of the military, and normally you're not a big fan of military.

PENN: That's not true. If anyone looks back at the things I've written, I've always been a supporter of the troops. I think that we have a responsibility to only deploy our troops constitutionally and responsibly.

If Fidel Castro and Sean Penn are in the same room, which one do you think hates America more?

Such a question doesn't seem to concern Vanity Fair who according to the website TMZ has hired Penn to write an article about how Barack Obama and his administration have impacted Cuba.

Miss California, Victim of Liberal Blacklisting for Her Conservatism

Leo Penn, the father of famous actor Sean Penn, was hauled before the House Committee on Un-American Activities during the 1950s and harassed, spied upon and ultimately blacklisted for his political views (he attended a pro-union meeting called to support other black- listees.)

He refused to accuse others, and lost his livelihood for a period of time, but went on to direct many TV shows including Star Trek, The Law and Mr. Jones, and I Spy.

Now Carrie Prejean, beauty queen and determined supporter of marriage between a man and a woman, finds herself smeared on the Internet, castigated in public, on TV, (Chelsea Handler on E! channel has taken aim with a vicious gleam in her vodka-stoked eyes) and her parents have been dragged through the mud as well.

So where are the free-speech warriors? How about Sean Penn and the rest of the Hollywood elitists who think the First Amendment was written solely for their benefit? Penn has made millions playing everything from a stoner in “Fast Times at Ridgemont High,” to gay Supervisor Harvey Milk, who was slain in a horrific attack in San Francisco that also resulted in the death of San Francisco mayor George Moscone.

Chavez’s Penn, Or How Santa Monica High Should Hang Its Penn in Shame

Someone needs to sue Santa Monica High School for education malpractice on behalf of the ill-educated Sean Penn. I mean, the man is nearly illiterate and he certainly has no grasp on history, philosophy, or statecraft. But his wacko left-wing inanities aside, it is his illiteracy that seems the most lamentable. Oh, it isn't Rosie O'Donnell illiterate. Hers is a special class of insensibility all by itself, but Penn's brand is proof of the lowest quality of education. I mean the man can barely put two words together sensibly much less exhibit a grasp of grammar and syntax. It really is a crime how badly he's been educated.

Take for instance his latest Huffington Post blathering where he seems to be saying that all we need to win the day in international relations is to give a "smile." Aside from being childishly simplistic in concept, it has some of the worst word usage and syntax I've seen for a long time in what is supposed to be a leader of opinion (again, Rosie aside).