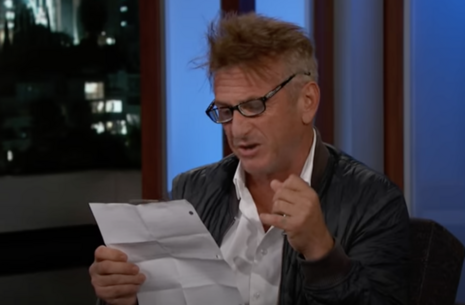 In a loony post, the Milk actor stated that Evangelicals need to be “impeached” by the Vatican for following Trump, who has led them to dwelling with Satin (yes, Satin) in the “bowels of hell.”

Also he mentioned something about Evangelicatholics (what we’re calling this new religious breed) having large “sex parties.” A-list actors, man. They’re just like us, except dumber … and possibly on a boatload of acid.

The shockingly stupid tweet entered existence on February 12, and the earth shook with the collective vibration of every social media user’s chin hitting the floor in utter disbelief. It really read as though a four year-old’s brain had hold of a famous person’s Twitter account.

“Evangelical leaders should themselves be impeached by the Vatican if they themselves don’t follow Nikki Haley’s lead & clearly state they should not have followed Satin into the bowels of hell. But, perhaps they are too busy at sex parties,” Penn posted on that fateful day.

Yes, he really typed this up and put in online. Unless someone knocked him out cold for two days or took all access to Twitter away from the legendary actor, he seems to have had the audacity to leave it up.

To say that there are several things wrong with this tweet would be a serious understatement. First of all. the entire point of Evangelicals being Evangelicals is so they don’t ever have to be “impeached” by the pope – not that that’s a legal maneuver the pope has recourse to – but, you know. They aren’t Catholic, so they take no instruction from him whatsoever.

And this is coming from a guy in the industry that loves to lecture Christians on their own morality. Could it be that many famous actors don’t know what they’re talking about? Shocking, we know. Mr. Penn’s only knowledge about the faith seems to be that “the bowels of hell” is a place you don’t want to be. Though at least that’s something.

Of course, we don’t want to harp on Penn’s obvious Twitter typo of spelling Satan as “Satin,” but the fact that it makes us envision the devil as a soft and comforting bit of fabric rather than the evil prince of hell and all of its tortures is remarkable. It’s just that extra cherry on top of the stupid sundae.

The hilarity of the tweet also almost distracted from its wicked premise, that Trump supporters have sold their souls. But honestly that’s probably the least remarkable, and most blasé part of the whole thing. And boy, that is crazy to say.

And about the “sex parties,” Sean. Isn’t Hollywood the home of Weinstein and a familiar stomping ground of high profile pedophiles like Jeffrey Epstein? Not saying Mr. Penn is any part of that, but for a Hollywood actor to call out conservatives for sex, maybe he could brush up on that parable of the “log in your own eye.” Heaven knows Penn could use some Bible study.